Building houses by hand takes a long time and requires a large number of workers and supervisors, but this home-building strategy will be a thing of the past.

A robot, the first of its kind, built an entire three-room home in the UK without human intervention.

The robot was designed by the York-based Construction Automation. It is able to restore bricks, blocks and mortar and can build around corners. 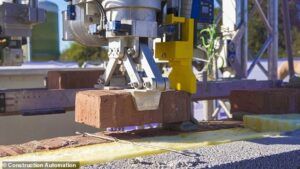 The robot began building in the house on September 28, and is expected to be completed within three weeks.

It is the first house in Britain to be built with a robot, David Longbottom, director and founder of the company, said, noting that after extensive research, the company concluded that there had been no such robot for building homes before.

“Our goal is to automate home construction as much as possible,” said Stuart Parks, co-founder of Construction Automation. 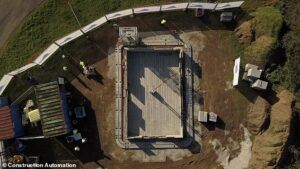 “We can increase industry productivity, improve health, safety and ensure quality,” he added, noting that the robot eliminated the need for scaffolding and for builders to work at height.

The robot is controlled by a tablet device that uses an advanced software control system that allows it to read digital copies of architectural plans.

It usually takes human construction workers about two years to learn their craft through apprenticeships.

These were the details of the news Construction workers are in danger … a robot that builds an... for this day. We hope that we have succeeded by giving you the full details and information. To follow all our news, you can subscribe to the alerts system or to one of our different systems to provide you with all that is new.

PREV Gulf News | Gulf Air appoints experienced Bahrainis to various...
NEXT A 2.46% increase in the inflation rate in the Sultanate last...

Saudi Arabia… A video of harassment of a girl was circulated...

Saudi Arabia releases Ali al-Nimr, who was sentenced to death in...