Hyperactive disorder could be based on a human food instinct triggered by consuming fructose-laden foods like cookies and ice cream, according to a study.

Researchers at the University of Colorado have argued that low fructose levels trigger a pathway that promotes foraging and storing energy as fat.

However, in excessive amounts, the same pathway becomes hyperactive – resulting in food cravings, impulsivity, and aggression that increase the risk of behavioral problems.

These include ADHD, manic depression and bipolar disorder, the team said.

Fructose – or fruit sugar – is naturally found in many plants and honey, but has become more common in the modern diet with refined sugars and corn syrup.

In fact, it is estimated that our fructose intake has increased 40-fold since the 18th century – which may also explain modern cases of diabetes and obesity.

While a small amount of sugar on a daily basis is fine, most people in the UK still consume too much, according to the World Health Organization.

This motivated the introduction of the so-called “sugar tax” on soft drinks, which came into force in April 2018.

“Behavioral disorders are common and have been linked to obesity and Western diets,” wrote University of Colorado paper author Richard Johnson and colleagues.

“Excessive fructose intake in the form of high fructose corn syrup and refined sugar can be a major contributor to these conditions.”

“Identifying fructose as a risk factor does not negate the importance of genetic, familial, physical, emotional, and environmental factors that affect mental health.”

However, he added, “We suggest that excessive intake of fructose in refined sugar and high fructose corn syrup may play a role in the pathogenesis of these conditions.”

“We do not blame sugar for aggressive behavior, but determine that it may make a contribution.”

In their work, the team reviewed previous studies on fructose and its effects on the human body to develop their case.

“By lowering the energy in cells, fructose triggers a search for food that is similar to that of hunger,” explained the researchers.

‘This foraging for food stimulates risk-taking, impulsiveness, the search for novelty and speed Decision making and aggressiveness to aid food security as a survival response, ”they added.

“While the fructose pathway should support survival, fructose intake has skyrocketed in the last century and can go into high gear due to the high amounts of sugar found in the current Western diet.”

“Unfortunately, overactivation of this process due to excessive sugar intake can lead to impulsive behavior, which can range from attention deficit hyperactivity disorder to bipolar disorder or even aggression.”

“For example, one study reported that subjects who scored higher on ADHD traits also tended to display more exploratory behavior, consistent with the idea that ADHD might reflect some type of foraging,” said Professor Johnson. 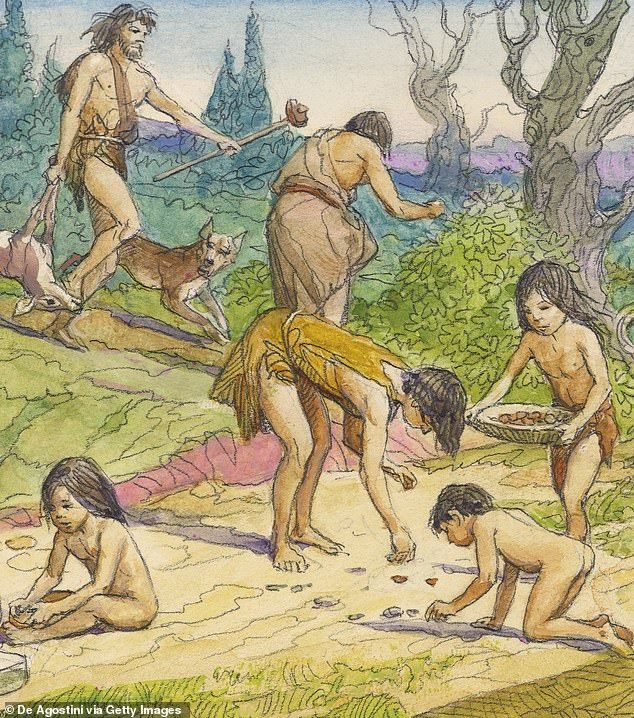 Researchers at the University of Colorado have argued that low fructose levels trigger a pathway that promotes foraging (pictured left) and storing energy as fat. However, in excessive amounts, the same pathway becomes hyperactive – resulting in food cravings, impulsivity, and aggression that increase the risk of behavioral problems

However, some experts viewed the results of the study with skepticism.

“This is an elegant and biologically plausible model based on sophisticated bio-ecological thinking,” King’s College London developmental psychologist Edmund Sonuga-Barke told The Times.

“Unfortunately, the notion that there is a consistent link between sugar consumption and ADHD in humans was largely invalidated decades ago,” he added.

The full results of the study were published in the journal Evolution and Human Behavior.

It affects around five percent of children in the United States. In the UK, 3.6 percent of boys and 0.85 percent of girls suffer.

Symptoms usually appear at an early age and become more noticeable as the child ages. This can also be:

Most cases are diagnosed between the ages of six and twelve. Adults can suffer too, but there is less research on it.

The exact cause of ADHD is unclear, but it is thought to be genetic mutations that affect a person’s brain function and structure.

Premature babies and those with epilepsy or brain damage are more at risk.

There is no cure.

A combination of medications and therapy is usually recommended to relieve symptoms and make everyday life easier.

These were the details of the news Diet: Cookies and ice cream sweetened with FRUCTOSE can make people... for this day. We hope that we have succeeded by giving you the full details and information. To follow all our news, you can subscribe to the alerts system or to one of our different systems to provide you with all that is new.

NEXT Why is “long-term Covid” a bigger problem than we think?