Thank you for reading the news about A piece of hit movie 365 Days ... and now with the details

Aden - Yasmine El Tohamy - THE FACT POLISH thriller 365 Days has enjoyed number one status across the majority of Netflix's 'most watched' lists around the world should have tipped us off, but it wasn't until lead actor, Michele Morrone, visited our city did the magnitude of this picture really make itself felt. The furore surrounding his landing in the UAE last month was virtually unprecedented. Such is the clamour for any association with the breakout hit, we had communications from all over the region pleading for any information on Morrone's whereabouts and/or contact details, to which we could never respond. His stopover passed relatively peacefully.

To deem the Italian's sojourn the movie's sole connection with these shores, however, would be incorrect. In one of 365 Days' most memorable sequences, protagonist Laura (Anna-Maria Sieklucka) can be seen wearing a distinctive pink robe adorned with a skull design on the back. Officially called: '365 Days' Romantic Skull - Tribal Kimono, the garment was proudly made in Dubai and has since gone on to become one of local design company Mystique Beach's best sellers.

"I am extremely grateful that they chose one of our kimonos for Laura, in what was probably the longest scene in the movie," founder Edyta Kochanowska-Holc told City Times. Initially a jewellery brand, Mystique was created by the Polish national who was living in Abu Dhabi in 2012. The firm later evolved into Mystique Beach when she began designing her own line of handmade kimonos, and the business moved to Jumeirah Lakes Towers. 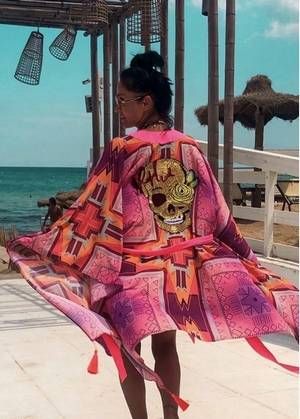 "We do collaborations with artists from around the world in order to provide our customers with a fuller experience in our online shop, however, all of our flagship products (kimonos and loungewear) are made by us in the UAE," Kochanowska-Holc said.

From the get-go the lines immediately garnered much worldwide attention and went on to catch the eye of author Blanka Lipinska who penned the 365 Days trilogy. When the first novel was being adapted for the screen, the writer knew there was only one brand her heroine should be wearing.

"One of the sponsors of the film was also Moliera 2 (one of the most high-end multi-brand stores in Poland)" said Kochanowska-Holc. "They are our largest distributor in Poland. They chose this kimono for the film." Given its vivacious colour transposed with the underlying danger a skull signifies, we couldn't have found a better match for this movie's themes if we tried.

Seeing her creation in the midst of the frenetic action was a proud day, Kochanowska-Holc added, not to mention a successful marketing endeavour.

"It looked fabulous. We have received so much interest in this particular kimono from around the world.

"At first, fans were having a hard time finding us (as we weren't credited in the film - Moliera 2 was), but the persistent ones managed to get through. Now, a search of pink kimono and the movie title leads you straight to us."

The experience has led the couturier to explore further film opportunities, though the most urgent engagement should surely be coming up with something for 365 Days 2?

"I am discussing designing something unique for the sequel, but that's all I can say at the moment..."

As 'Hard For Me' as it was not to press the issue, we shall just have to wait and see.

These were the details of the news Bollywood News - A piece of hit movie 365 Days ... for this day. We hope that we have succeeded by giving you the full details and information. To follow all our news, you can subscribe to the alerts system or to one of our different systems to provide you with all that is new.