Ashley Cain announced that his daughter Azaylia was turned away three times by doctors before she was diagnosed with leukemia.

The 29-year-old ex On The Beach star took to Instagram Monday to explain how he was visiting his GP with his baby when she had a stomach ache, but they simply told him she had colic.

Ashley then took Azaylia – who is now nine weeks old – back two more times just to prescribe her laxative and a nasal spray when her breathing was impeded.

Sad: Ashley Cain announced that his daughter Azaylia had been turned down three times by doctors before she was diagnosed with leukemia

He went on to explain how he used his “parental instinct” and called 111, who immediately dispatched an ambulance when encouraging other parents to be careful.

Alongside a cute video of Ashley falling in love with his little one after receiving chemotherapy in the hospital, he wrote: “My daughter had seen the doctors three times before we called the ambulance.

“Every time they sent us away, they thought our daughter had normal routine problems with the baby. In fact, her stomach didn’t hurt because she had colic or was constipated … 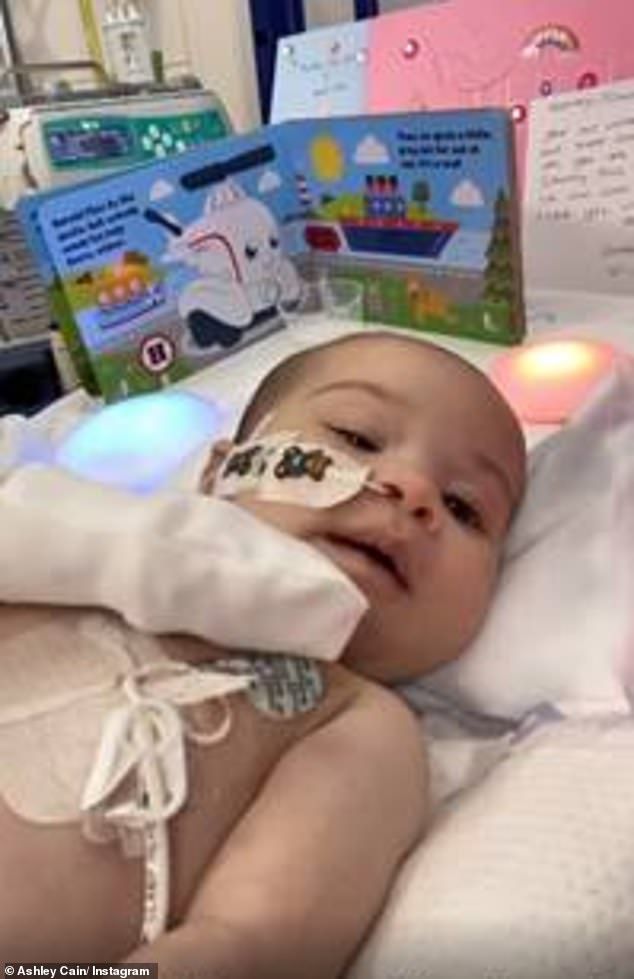 Concerned: The 29-year-old ex On The Beach star took to Instagram Monday to explain how he was visiting his GP with his baby when she had a stomach ache, but they simply told him she had colic 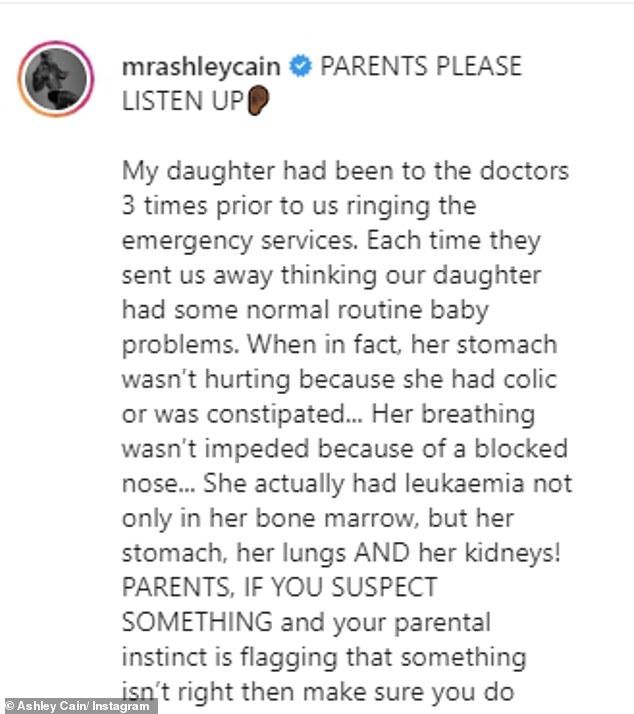 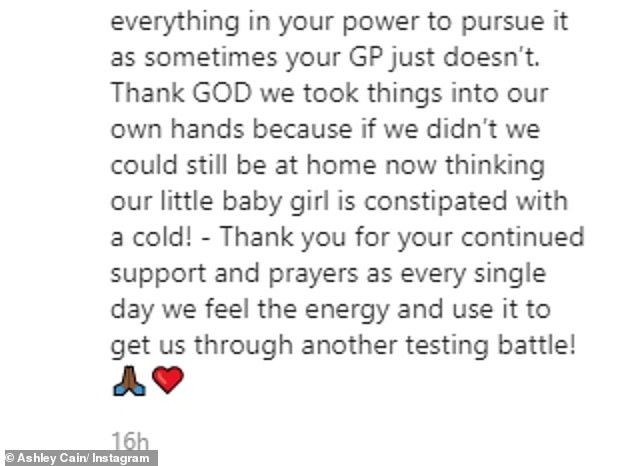 Journey: In addition to a cute video of Ashley dealing with his little one while she was receiving chemotherapy in the hospital, he explained what had happened

“Her breathing wasn’t blocked by a stuffy nose… She actually had leukemia not only in the bone marrow, but also in her stomach, lungs AND kidneys!

“PARENTS, IF YOU SUSPECT SOMETHING, and your parental instincts indicate something is wrong, make sure you do everything in your power to track it down, as sometimes your GP just doesn’t.

“Thank God we took matters into our own hands because if we hadn’t, we could still be home now thinking our little girl has a cold! – Thank you for your continued support and prayers, because every day we feel the energy and use it to get us through another test fight! ‚ 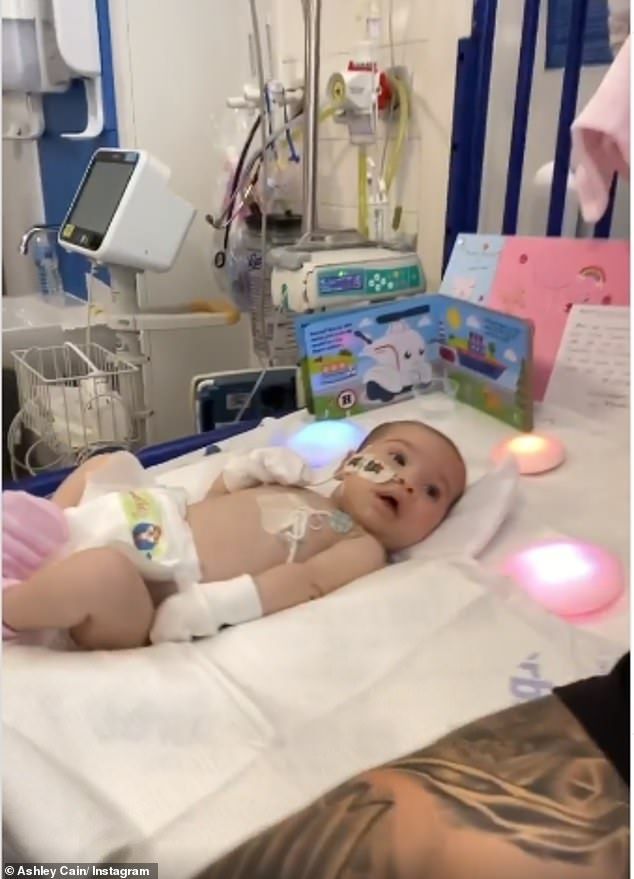 Concern: In the video, Ashley went on to explain how he used his ‘parental instinct’ and called 111 who immediately dispatched an ambulance when encouraging other parents to be careful

In the Instagram clip, Ashley cuddled his daughter as she was treated in her hospital bed.

He said, “She was great this week. It’s crazy to think how strong this little lion is with all the stuff she’s been through, all the chemotherapy, all the blood transfusions, all the scans.

“It will take a tough few weeks to finish this chemo block, but we keep our fingers crossed.

“From one parent to another, this is my experience. After talking to other parents in the hospital, we took our daughter to the doctors. They said she had colic, a stuffy nose, and constipation. They gave her laxatives and nasal sprays. 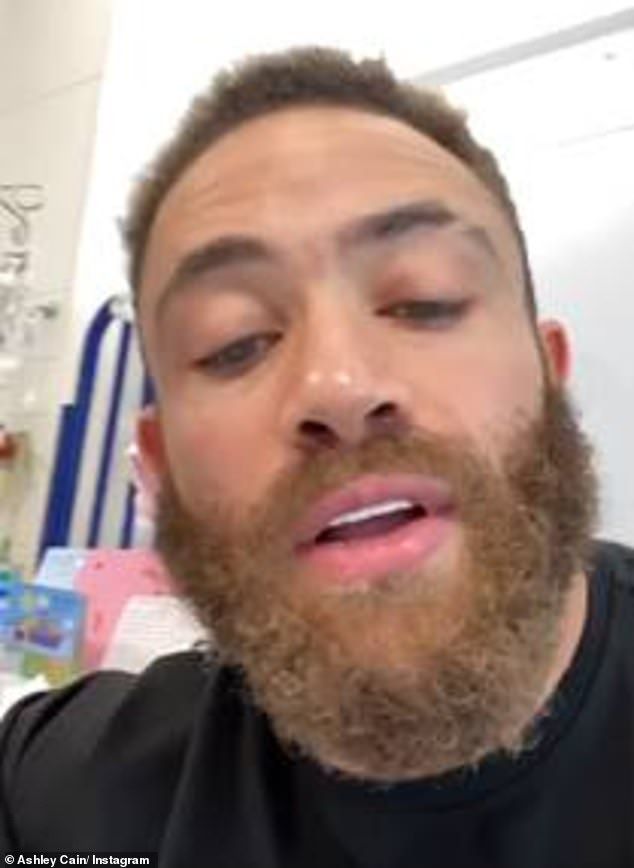 News: Last week, Ashley announced to followers that his daughter had leukemia, a cancer of the body’s blood-forming tissues

Then we called 111 and they sent an ambulance straight away. It’s not about being a paranoid parent. If you are concerned, go ahead.

“If it hadn’t been for us, we would be home and she probably wouldn’t have woken up because we didn’t know there was a problem. Thank goodness we made that decision to bring her here. ‚

Last week, Ashley announced to followers that his daughter had leukemia, a cancer of the body’s blood-forming tissues.

He said, “We have accepted what is going on, we know what to do to beat it. 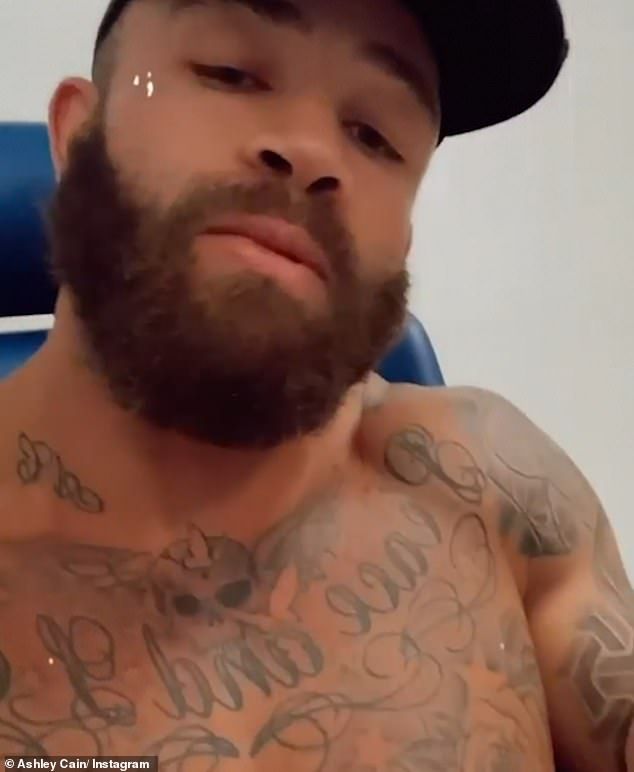 Difficult: When he made the announcement last week, Ashley said, “It’s a sad, sad time, but I’m going step by step and we keep winning battles and eventually we win the war.”

‘This little soldier fights amazingly, it’s amazing. She has a very rare and aggressive case of this, and she is very small so she fights an uphill battle, but I have hope and confidence that she will surprise everyone.

“We will keep fighting and working and doing it step by step, day by day – as long as we have these promising results we will be fine.

“As long as there is a glimmer of hope, it doesn’t matter how much or how little, we will hold on to it and use that to propel us to the stars and back. 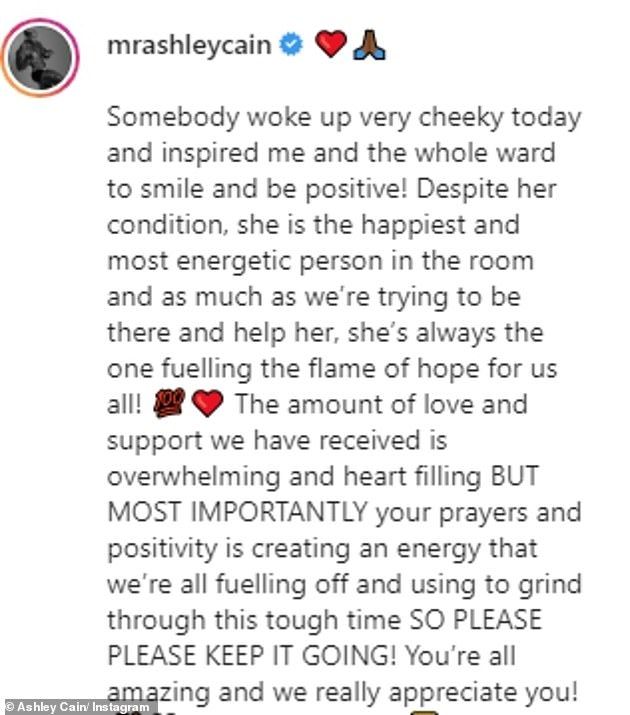 Health: He added, “As long as there is a glimmer of hope, it doesn’t matter how much or how little, we’ll hold onto it and use that to propel us to the stars and back.”

“I wanted everyone to know in times like these that you are holding onto every piece of faith and all of the positive messages and all of the prayers. 100% trust me that they will help.

‘We feel love, so thanks for the positive attitude; We fight, we are strong and we will beat that. ‚

The reality star titled the emotional video: “Someone woke up very cheeky today and inspired me and the whole community to smile and be positive!

“Despite her condition, she is the happiest and most energetic person in the room and as much as we try to be there and help her, she is always the one who fuels the flame of hope for all of us! 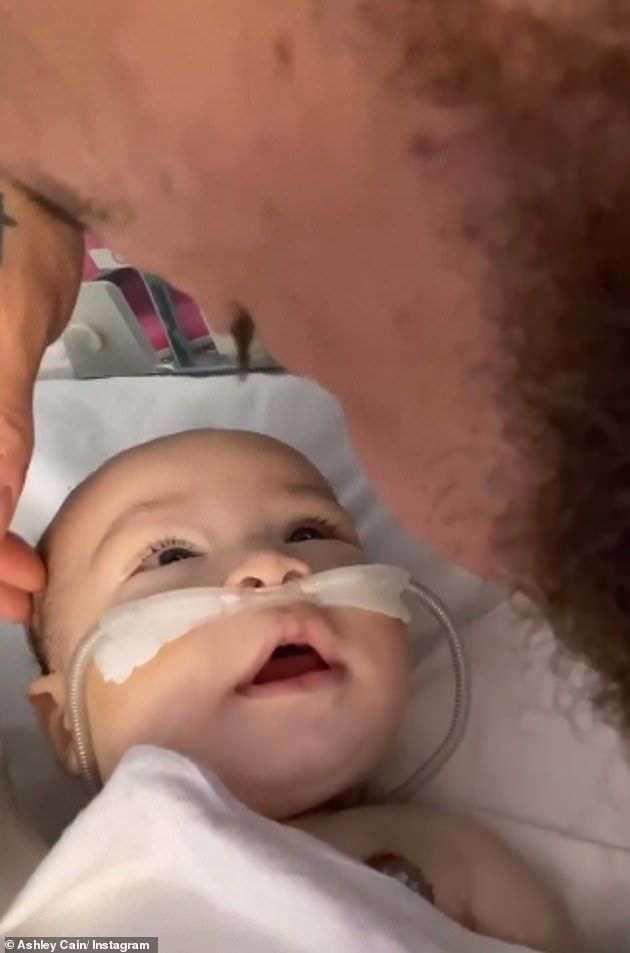 The amount of love and support we have received is overwhelming and heart filling, BUT MOST IMPORTANT, that your prayers and positive attitude create an energy that we all fuel and use to get through this difficult time.

“You are all amazing and we really appreciate you guys! LETS GO CHAMP. ‚ 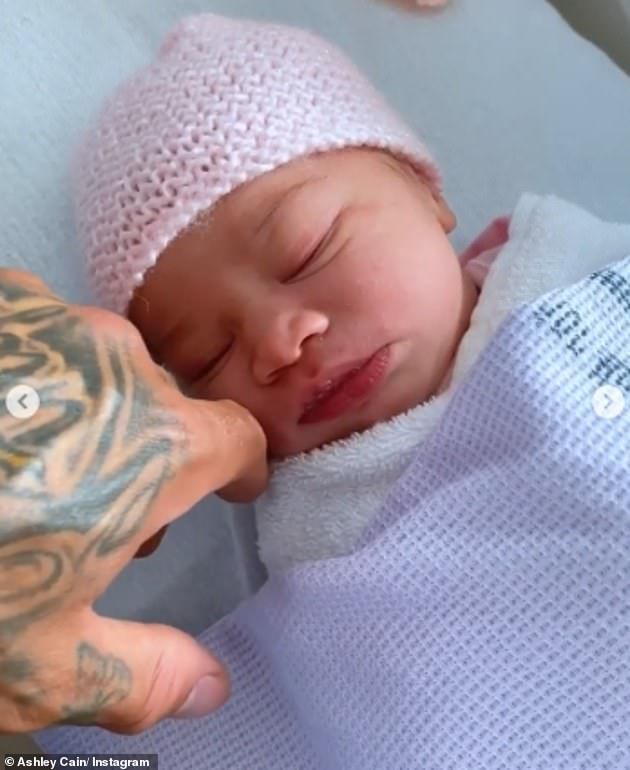 Proud Dad: Ex On The Beach star Ashley announced the birth of his daughter back in August, with a cute snap of the little girl wearing a pink hat

‘There are no words to describe this feeling. But it opened new doors to my life and heart. I could literally look at her all day and hold her until my arms gave out.

“But mainly I will always be there for you as your father, your friend and your confidante! Daddy loves you baby you changed my life! ‚

Ashley made his mark as one of the original Ex On The Beach stars after starting a career as a footballer.

He starred in the first series and returned for the second, before moving to the celebrity fifth season in 2016.

He had an affair with Jemma Lucy on the show and dated Big Brother star Chloe Khan a year later, but split in February 2018. 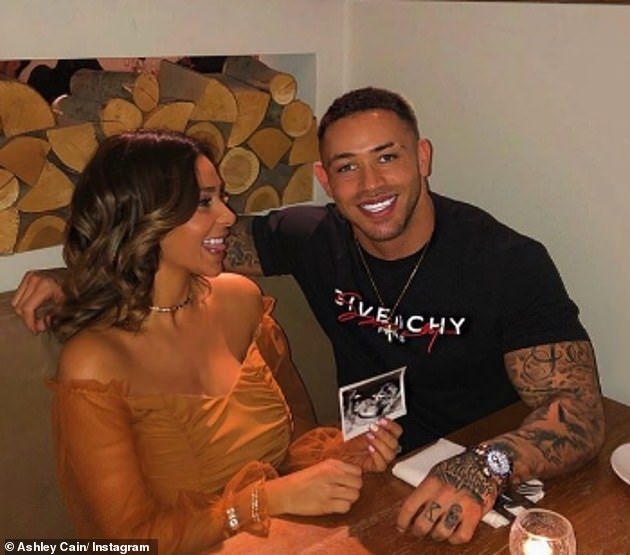 Expecting: Ashley and esthete Safiyya announced they would be expecting their first child together on Instagram in February

What are the symptoms of childhood leukemia?

Fatigue and pale skin – This is because leukemia can cause anemia, which makes a child feel weak, tired, and light-headed.

Rash – Children may have small, dark spots that look like frequent rashes when the leukemia cells spread to the skin

Easy bruising or bleeding – These include frequent nosebleeds, bleeding gums, and heavy bleeding from small cuts.

Bone or joint pain – This is caused by the accumulation of leukemia cells near the surface of the bone or within the joint.

Swelling of the abdomen – Leukemia cells can accumulate in the liver and spleen and cause them to enlarge.

Loss of appetite and weight loss – When the spleen and liver swell, they can press against the stomach and cause loss of appetite.

These were the details of the news Ashley Cain reveals that his baby was turned away three times... for this day. We hope that we have succeeded by giving you the full details and information. To follow all our news, you can subscribe to the alerts system or to one of our different systems to provide you with all that is new.