Thank you for your reading and interest in the news Like doomsday: worst locust swarm in decades devours a path through India and now with details

Hind Al Soulia - Riyadh - It was an ordinary morning for banker Ankur Parekh until he saw a swarm of brown desert locusts blanket the dawn skies in the capital city of India’s western state of Rajasthan this week.

The 36-year-old walked to his balcony on Tuesday morning to an astonishing sight – a roaring blizzard of insects invading parts of Jaipur city in their hundreds of thousands.

“It felt like doomsday,” Mr Parekh told The National. “It was terrifying. I felt like I was in a sci-fi movie. They were everywhere.”

Mr Parekh quickly ran inside his room as people banged metal kitchenware and set off firecrackers to drive the pests from trees and houses, a desperate method used by many residents in a state that has been battling a locust scourge for weeks. 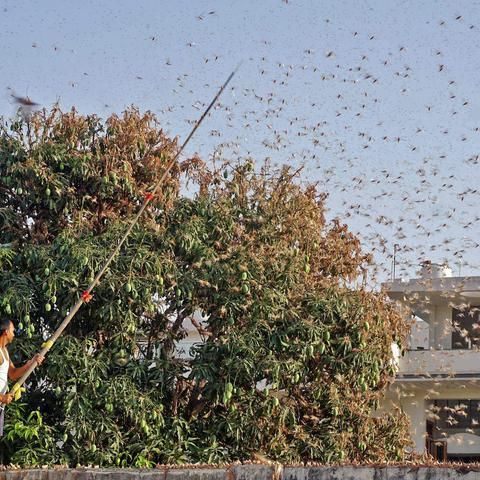 India is in the grip of the worst desert locust outbreak in nearly three decades as huge swarms of the crop-munching insects reached the country through Pakistan from East Africa in April, posing a serious threat to crops.

Officials said at least 10 large pest swarms, each spread over a square kilometre, destroyed more than 50,000 hectares of farmland in two Indian states, making it the worst plague since 1993.

Locusts, which are from the grasshopper family, can fly up to 150 kilometres a day, and a square-kilometre swarm can eat as much food as 35,000 people in a single day, according to the UN Food and Agriculture Organisation.

The authorities say the migratory insects make their way into India every year between July to October but blame the oversized invasion to mass breeding and a failure to halt their movement as they passed through neighbouring countries.

“There is a mobilisation in the Horn of Africa, the Middle East, Iran, Saudi Arabia… locusts are widely prevalent and multiplying in these countries,” K L Gurjar, deputy director at India’s Locust Warning Organisation, told The National.

“We are expecting the swarm to continue because these are coming from Pakistan and moving from spring breeding to summer breeding areas,” he said.

Last year, about 25,000 hectares of cropland were destroyed during a similar off-season attack that lasted until December.

At least 18 districts in Rajasthan have seen standing crops and trees destroyed in recent weeks as wind direction and speed push the pests deeper into India’s key agricultural states of Madhya Pradesh and Uttar Pradesh.

Smaller swarms are active in the western states of Gujarat and Maharashtra.

Some swarms have ventured into cities and towns due to wind patterns, devouring bushes, plants and trees as the authorities use drones, tractors and firefighting vehicles to chase the insects and spray pesticide.

Many farmers in Uttar Pradesh have installed sound systems to play loud music in a bid to ward locusts off fields. Police in affected areas blast sirens and hooters.

The Indian agriculture ministry has issued advisories and stepped up efforts to control the menace as it poses threat to the livelihood of farmers already reeling under severe damage due to an ongoing nationwide lockdown against coronavirus.

Scientists believe the massive outbreak is a possible outcome of unusually warm weather and rains in the Indian subcontinent that is currently reeling under a severe heatwave with temperatures hitting 50°C in parts of west India.

Roxy Mathew Koll, a climate scientist, said the earlier outbreak was possibly a result of heavy rains late last year due to the warm water in the Indian ocean.

“Heavy rain triggers the growth of vegetation in arid areas where desert locusts can then grow and breed,” Mr Koll told The National.

Many farmers and experts have criticised government slow response to the crises and demanded that the authorities declare an emergency to deal with the menace.

Devinder Sharma, an agriculture and trade policy expert, said the farmers are under tremendous stress due to the lockdown and locusts are dealing a double blow to them.

“Locusts leave destruction worse than drought, not only are the crops destroyed but even trees collapse under their weight,” Mr Sharma said.

The FAO says the best control mechanism is to spray breeding sites and monitor for smaller bands before they become mobile flying swarms able to move rapidly across large areas devouring crops.

Once this happens, however, using pesticides from the ground and air can help kill off the locusts and halt their ravenous rampage.

These were the details of the news Like doomsday: worst locust swarm in decades devours a path through India for this day. We hope that we have succeeded by giving you the full details and information. To follow all our news, you can subscribe to the alerts system or to one of our different systems to provide you with all that is new.