Hind Al Soulia - Riyadh - When John Gordon Lorimer died unexpectedly in 1914 the British Political Resident’s standing was such that flags in Gulf states were lowered.

To this day, both his encyclopaedic works on Arabia and his reputation remain in high esteem, such was his influence in informing the wider world from his postings, including a stint in Bahrain.

That goodwill extends to his great grandson, named after the academic and diplomat, and who, a few generations on, remains on good terms with Gulf leaders.

Lt Gen Sir John Lorimer’s deep and personal history of the region inevitably took him on a military career that swirled around the Middle East, its conflicts, culture and people.

Nearly three years into the job as Britain’s Defence Senior Adviser to the Middle East, he has cemented strong relationships with Crown Prince Mohammed bin Zayed as well as UAE defence ministers and military chiefs. In his role as Britain’s chief military and commercial ambassador to the Middle East, he also calls on the Emir of Kuwait, the King of Bahrain and Sultan of Oman.

It is a relationship that works well for both sides. Britain strengthens its military and business ties with the Gulf while providing reassurance that it remains a dependable ally.

Those ties have proven crucial during the pandemic that threatens the global economy.

Within hours of lockdown being introduced Sir John was going through his contacts list and engaging with the leaders via WhatsApp, Skype and Zoom.

“I call this virtual outreach, to reassure all the countries across the region that the UK has not forgotten about them,” he told The National, speaking via Zoom from his home in England. “We are still good friends and good partners despite the challenges of Covid. From our perspective we’ve had a difficult time and they’ve been very sympathetic.”

Indeed Britain’s ‘difficult time’ has seen it lose at least 43,000 people to the disease and 300,000 contract it. When the UK was struggling at the height of the coronavirus crisis, with its hospitals almost overwhelmed, the UAE sent almost 100 tonnes of protective equipment and testing kits as well as allowing London’s Emirates Excel Arena to be used as a back-up hospital, where by chance Sir John’s wife worked as a volunteer.

“We have to say thank you for the support, specifically from UAE. They have been incredibly supportive, which is emblematic of the Emiratis.”

'Working together is so important' 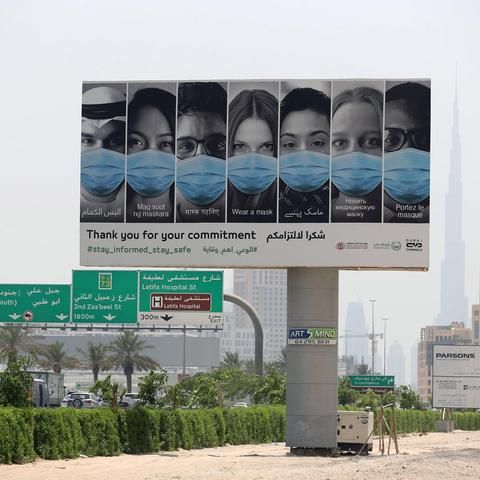 The discussions on Covid-19 have allowed both sides to share information, lessons learnt and best practices in the “new world order” that the disease has hastily ushered in.

“It’s not just defence and security,” said Sir John. “It’s politics, the economy, humanitarian, health and education. And it’s psychological because a lot of people have gone through a really hard time. That’s why working together is so important.

“We have long-term partnerships and Covid is just another way we have to cooperate in the future and not ignore each other.”

Opportunities on the horizon

Britain’s relationship with the rest of the world is going to face a severe test when it leaves the European Union in 2021, with or without a trade deal. Downing Street is looking at new trading relationships and agreements and the Gulf is high on the agenda.

“Post-Brexit and post-Covid link together,” said Sir John, 57. “The UK is confident outward looking, trusted and trusting partner with our friends in the region. Clearly we would wish to build on our shared history and interest with Gulf states.”

He added that Boris Johnson has a taken “a real interest in the Gulf” and has strong personal relationships with its leaders including Crown Prince Mohammed bin Zayed. The Prime Minister is also working with the trade and defence secretaries “to push forward with a trade mission into the region”.

“The GCC is seventh largest export market for the UK and clearly there are opportunities to expand on this post-Brexit.”

Britain’s connections run deeper than that. There are 120,000 British citizens living in the UAE and more than a million visit the Gulf each year. The Royal Family are also regular guests with the Prince of Wales and Duke of Cambridge visiting just before lockdown. They too have kept in contact with the region during the pandemic.

Britain’s military involvement in the Gulf has seen it join the coalition that forced Saddam Hussein out of Kuwait in 1991 and the 2003 invasion that toppled the dictator. Sir John once again followed in his forebear’s path when he commanded a Parachute Regiment battalion in 2003 and British brigade in Basra in 2005.

With Iran increasing its military strength there is greater importance attached to the British defence industry, in particular the defence firm BAE Systems.

Sir John indicated that while business in lockdown was difficult, deals were still going ahead and contracts signed. Once travel restrictions are lifted the Ministry of Defence and Department for International Trade will work with industry to get into trade shows.

“UK firms are carrying on trying to do as much as they can. They are missing the face-to-face, sitting down and talking, although a lot of it can be done virtually. Because we have invested so much time in relationships we have a good foundation so we can progress it through virtual conversation and Skype. That highlights the strength of the relationship.”

For a man much endeared to the region the job is an ideal fit. Travel takes him through the Maghreb, North Africa, then up into the Levant and the Gulf. Even before lockdown in March, this year he managed to visit Egypt, Iraq, Saudi Arabia, Oman, Kuwait and Lebanon.

Perhaps guided by a strong Middle East tradition, Sir John opted to study Arabic and Islamic Studies at Cambridge University. Over the long summers he travelled to the Middle East learning his Arabic in Egypt, which occasionally leads to unexpected reactions. “People sometimes raise their eyebrows because the Egyptian slang comes out although I do my best to raise my game.”

His travels gave rise to a fascination with the Arabic people, their traditions, history and culture. “All of that gives me a desire to make a difference in terms of between Britain and the region.”

He also enjoys its people, their manners and hospitality. “The personal relationships you are able to develop there are very special. It takes a bit of time, but once you get that relationship the people I deal with are incredibly generous, exceptionally good in terms of time and sharing their views.

“One of the most interesting things about the region is it’s so complex. For a non-Arab and non-Muslim, it’s difficult but I enjoy that challenge to try and understand what’s going on.”

After lockdown Sir John will continue to visit the area where his great grandfather spent his career. His affinity is strong. As he says, “It’s in my blood.”

These were the details of the news 'We are all still good friends and partners despite the challenges of Covid' for this day. We hope that we have succeeded by giving you the full details and information. To follow all our news, you can subscribe to the alerts system or to one of our different systems to provide you with all that is new.

Dubai Tourism praises the support of its international partners in accelerating...

Voices of Future Generations Celebrates the Innovators of Tomorrow in Dubai