Thank you for your reading and interest in the news From Iraqi militia arrests to Lebanese currency plunge: the non-coronavirus news you might have missed and now with details

Hind Al Soulia - Riyadh - Iraq's Counter Terrorism Services raided a base of the Kataib Hezbollah paramilitary late on Thursday in the most brazen state action against a major Iran-backed militia in years.

An army statement said 14 people were arrested in connection with rocket attacks on bases hosting American troops and other facilities in Iraq. It did not name the militia involved but an Iraqi official close to Prime Minister Mustafa Al Kadhimi confirmed to The National that it was Kataib Hezbollah, also known as Brigade 45 of Iraq's paramilitary umbrella grouping, the Popular Mobilisation Forces (PMF).

The raid comes after six rocket attacks targeting the US embassy in Baghdad and US military sites over the past two weeks. The Unites States has blamed Kataib Hezbollah for such attacks in the past.

Sajad Jiyad, a Baghdad-based analyst, said Mr Al Kadhimi was sending a message that he is serious about confronting groups who undermine the rule of law.

Egypt, Ethiopia and Sudan agreed to resume negotiations over the operation and filling of a massive Nile dam being built by Addis Ababa, in a move likely to defuse tensions that have steadily built up between the three nations since the collapse of the latest round of talks earlier this month

The agreement was made in a videoconference summit on Friday that brought together the leaders of the three nations under the auspices of the African Union.

Negotiators were given two weeks to reach a legally binding agreement that resolves all outstanding issues, like how to handle sustained drought and settle future disputes.

Egyptian Foreign Minister Sameh Shoukry said a UN Security Council meeting to discuss the dispute would go ahead as scheduled on Monday.

President Donald Trump's administration is restricting US visas for a number of Chinese officials for infringing on the autonomy of Hong Kong, announcing action as Congress seeks tougher sanctions.

US Secretary of State Mike Pompeo said the United States would curb visas for unspecified current and former officials of the Chinese Communist Party "who were responsible for eviscerating Hong Kong's freedoms."

China is moving forward on a security law that would enforce punishment for subversion and other offenses in Hong Kong, which saw massive and sometimes violent pro-democracy protests last year.

Activists say the law would effectively undo the freedoms enjoyed by Hong Kong, one of the world's premier financial hubs.

Two vehicles fell into a river, killing two people and leaving three others unaccounted for, according to the Mianning county government in Sichuan province.

Another person was killed and nine more are missing in Yihai township, the county said in a post on its social media account. Mianning is about 280 kilometers south-west of Chengdu, the capital of Sichuan.

About 7,500 people have been evacuated from their homes.

A 40-year-old Norwegian man has been found guilty of spying for Iran and involvement in an aborted plot to murder an anti-Tehran activist on Danish soil.

The man, who was not identified but is of Iranian descent, was found guilty after a trial in Denmark in a case linked to a 2018 police operation involving an alleged Iranian plot to kill one or more opponents of the Iranian government. That operation briefly cut off the island on which Copenhagen sits from the rest of Denmark.

The convicted man “collected information about an exiled Iranian in Denmark” from September 25 to 27, 2018, and passed it to a person working for an unnamed Iranian intelligence service, the court in Roskilde, west of Copenhagen, found. 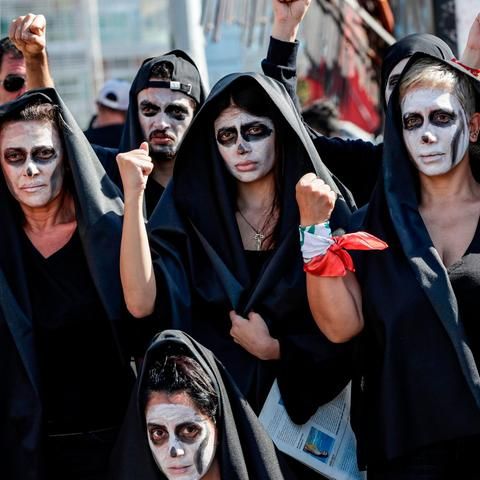 The Lebanese pound tumbled to new lows against the dollar on the black market on Friday as food importer said the currency collapse was hitting imports.

Food importers were being quoted a price of 7,500 to buy dollars on Friday, said Hani Bohsali, president of the Syndicate of Importers of Foodstuffs, Consumer Products and Drinks.

That compares to rates of 3,850/3,900 at licensed foreign currency dealers and the official peg of 1,507.5, which the central bank is still applying for imports of wheat, medicine and fuel.

Mr Bohsali said food importers have only been able to secure 20 per cent of their foreign currency needs at the licensed dealers in the last two weeks, leaving them dependent on the parallel market for the rest.

"Food imports are being reduced. It cannot continue this way. If you can't find dollars to import, you don't have any guarantee that if you ship something you will be able to get the funds for it," he said.

These were the details of the news From Iraqi militia arrests to Lebanese currency plunge: the non-coronavirus news you might have missed for this day. We hope that we have succeeded by giving you the full details and information. To follow all our news, you can subscribe to the alerts system or to one of our different systems to provide you with all that is new.