Hind Al Soulia - Riyadh - A spate of suicides in Lebanon has fuelled public anger over an economic crisis that has caused prices to soar and increased unemployment as businesses struggle to survive.

The most widely publicised incident took place in the busy Hamra area of Beirut on Friday morning, when a man shot himself in the street outside a cafe.

“Clients were having coffee when a loud voice was heard saying ‘Lebanon free and independent’ followed by a gunshot. There he was, down on the pavement in a pool of blood,” a waiter from a restaurant nearby told The National.

“He had covered his face with a towel to avoid being seen shooting himself … He left a suicide note beside him that read ‘I am not an atheist’.”

The line is believed to be a reference to a well known song by the Lebanese musician Ziad Rahabni that goes: “I am not an atheist … but hunger is an atheist’.

A small Lebanese flag and a certificate stating that the man had no criminal record were also found beside the body.

The certificate identified the man as Ali Al Huq, 61.

He had returned to the country two years ago after nearly five years in the UAE and was working as a manager in a shop on the outskirts of the capital, the state-run National News Agency reported.

Protesters gathered at the site before the body was removed by authorities and raised slogans blaming the government. In a video on social media, the man’s cousin is heard shouting “he killed himself because of hunger” as security forces carried the body away at 1pm.

Lebanon’s crisis has only grown worse since increasing hardship triggered popular protests against the political system and corruption last October.

The economy took another hit from the restrictions imposed earlier this year because of the pandemic.

The number of people estimated to be living below the poverty line has reached one million – about a fifth of the population – after redundancies, salary cuts and business closures.

Meanwhile, the value of the Lebanese pound has plummeted from its peg of 1,515 to the US dollar to almost 9,000 on the black market amid a foreign currency shortage, pushing the price of basic goods beyond the reach of many in the import-dependent country. 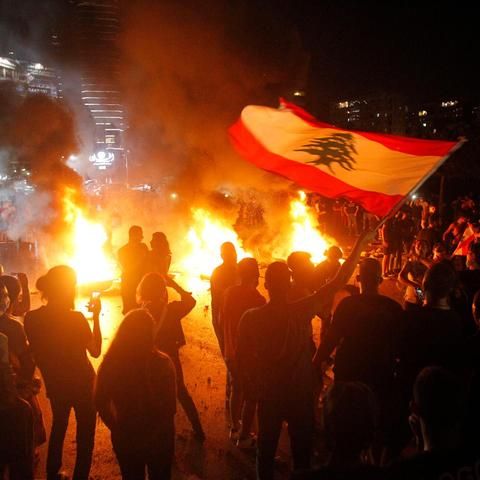 On Friday, news emerged of another death in the southern port city of Saida, where a man aged 32 was found hanged at his home Saida, leaving his wife and daughter behind.

A Lebanese Internal Security officer told The National of two other suicides, of a man in his eighties in Tyre yesterday, and another man, aged about 70, in Baabdat.

Local media reported that the suicide in Tyre was a result of financial problems.

The official attributed the death to a combination of mental illness and “economic pressure”. “Like many other countries, there has been a slight increase in suicide cases for many reasons that aren’t limited to deprivation. Covid-19 and other diseases could be a reason,” he said.

Sabah Mohammad, a retired teacher, said the crisis had left her feeling hopeless.

“I am barely surviving on my pension and what my daughter sends me from abroad,” she said.

“The dollar crisis is pulling us down.

“There have been waves of criticism over the cabinet’s mishandling and mismanaging the crisis. I survived the civil war but I am unsure if we could survive this economic war.”

Sami Nader, an economist and director of the Levant Institute for Strategic Affairs in Beirut, said he expected more suicides to occur because nothing had been done to help Lebanon out of the current crisis.

“The authorities and the government are totally paralysed … no decision has been taken so far to stop the collapse,” Mr Nader said.

“No reforms are on the horizon and that means no international help, because the only way to get out of the crisis is to get some funds from outside.

“Now the only available option is the International Monetary Fund. With all that’s happening, the division inside the government and being incapable of taking any measures to fix the problem, we’re heading for the worst.”

These were the details of the news Fury mounts after Lebanese men end lives amid deepening economic crisis for this day. We hope that we have succeeded by giving you the full details and information. To follow all our news, you can subscribe to the alerts system or to one of our different systems to provide you with all that is new.

PREV Nutrition experts warn of famous drinks that cause premature aging!
NEXT Abir Moussa: We reject dictatorship and autocracy in Tunisia (video)