Thank you for your reading and interest in the news Hagia Sophia: Turkey's mosque conversion may embolden extremists, say experts and now with details

Hind Al Soulia - Riyadh - Reverting Istanbul’s Hagia Sophia to a mosque risks inspiring religious extremists and threatens other cultural sites across the region, according to a leading expert on religious heritage.

Turkey’s top administrative court on Friday announced its decision to revoke the 1,500-year-old former cathedral’s status as a museum, paving the way for it to be opened as a mosque again.

Tugba Tanyeri Erdemir, a research associate at the University of Pittsburgh, said Turkish President Recep Tayyip Erdogan’s use of “a rhetoric of conquest” in justifying the change had set a dangerous precedent for religious minorities in Turkey and the Middle East.

“It can embolden extremists to intensify their campaign of forced conversion and destruction of minority heritage sites,” she told The National.

Dr Tanyeri Erdemir, a member of Turkey’s Association for the Protection of Cultural Heritage whose research focuses on managing minority religious sites, said the conversion would harm Turkey’s reputation.

“Turkey already has a problematic track record when it comes to minority rights and freedom of religion or belief,” she said.

“Hagia Sophia's conversion will further undermine the country’s global image. Senior officials from the United States, Russia and Greece have already expressed their concerns over Erdogan's proposed conversion plans and many others from around the world will without a doubt join them.” 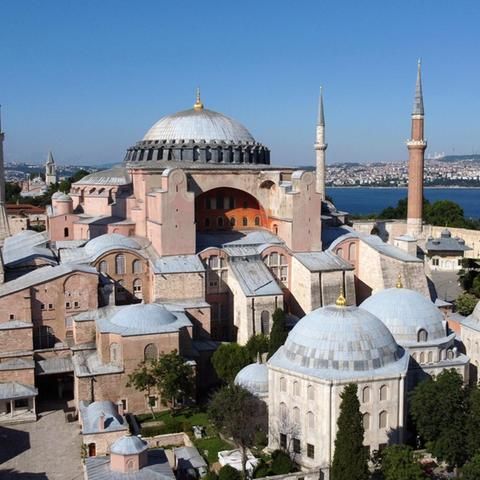 Built by the Byzantines in the 6th century, Hagia Sophia was for centuries the world’s largest building, a centrepiece for Christianity and an engineering marvel. After conquering Istanbul in 1453, Ottoman Sultan Mehmet II made it a place of worship for Muslims.

In 1934, Mustafa Kemal Ataturk’s secular regime turned it into a museum, a decree at the centre of Friday’s announcement by the Council of State. It was designated a Unesco World Heritage site in the 1980s.

The verdict has been highly anticipated since Mr Erdogan revived the debate in recent weeks.

Before last year, the president remained outwardly ambivalent about Hagia Sophia but in the run-up to local elections he outlined his support for its role as a mosque.

In May, he appeared on a giant screen as an imam recited the Quran from the iconic monument to mark the anniversary of the Ottoman conquest, an appearance that sparked an outpouring of support for re-designating the site.

The status of the building, which received 3.7 million visitors last year, has served as a rallying cry for Mr Erdogan’s conservative and nationalist base and some observers say the president has used the issue to distract voters.

Pro-government media has suggested the multi-domed structure could open as a mosque on July 15 – the fourth anniversary of a coup attempt against Mr Erdogan.

“Erdogan’s decision to convert Hagia Sophia into a mosque is a political ploy to boost his waning voter support while also a move to mark his legacy,” said Dr Tanyeri Erdemir.

Berk Esen, associate professor of international relations at Bilkent University in Ankara, said Hagia Sophia had been a significant issue for pious voters since it was made a museum.

“However, I don’t think today’s decision will change the situation very much for Erdogan and Turkish politics,” he said. “I don’t think many voters, in the middle of an economic crisis, have been waiting anxiously for this.”

Religious minorities in Turkey, Dr Esen added, had “no illusions about the current government, which has been proceeding in this direction for some time, so this will only solidify that image.”

Changing the building’s status was foreshadowed in several other cases since 2011 where museums that had been churches and later mosques were reverted to mosques.

The case led to foreign officials and church leaders calling on Turkey to back away from reclaiming the building, known as Aya Sofya in Turkish, for Islam.

However, Talha Kose, chair of political science and international relations at Istanbul’s Ibn Haldun University, said the monument could remain open to non-Muslims outside prayer times, as is the nearby Blue Mosque.

“I don’t think other nations or political actors should intervene in Turkey’s decisions in this issue, this is totally a domestic matter,” he said.

“Pressuring Turkey in this matter is counterproductive. There may be a dialogue with Unesco though. It is a cultural heritage site and should stay like that but it does not contradict the decision of opening as a mosque.”

On Friday, Unesco said governments “must ensure that no modification is made to the outstanding universal value” of World Heritage sites. In a statement, the agency called on Turkey to “engage in dialogue before taking any decision that might impact the universal value of the site”.

Hagia Sophia’s transformation has also raised fears about the preservation of the building and its historic treasures.

Dr Tanyeri Erdemir said the conversion of three other former churches-turned-museums had resulted in “substantial damage to the historical fabric of the edifices”.

These were the details of the news Hagia Sophia: Turkey's mosque conversion may embolden extremists, say experts for this day. We hope that we have succeeded by giving you the full details and information. To follow all our news, you can subscribe to the alerts system or to one of our different systems to provide you with all that is new.