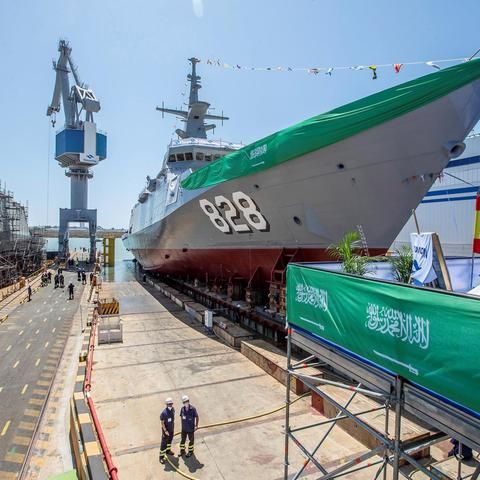 The Saudi Royal Navy is celebrating the launch of its first new Avante 2200 corvette warship in Spain.

Commander of the Saudi Navy, Lt Col Fahad Al Ghafili attended the launch of the Al Jubail made by Spanish shipbuilder Navantia. It is the first of five ordered by Riyadh at a cost of $2.1 billion.

Other Saudi officials, as well as executives from Navantia, joined the ceremony to launch the Al Jubail.

The 98.9-metre Avante 2200 is designed as a surveillance and protection vessel suited for ship-to-ship fighting as well as anti-air, electronic warfare, maritime protection, search and rescue, humanitarian aid, pollution control and anti-smuggling operations. It can carry a crew of 111 and can launch and recover helicopters from a rear flight deck.

The Al Jubail is expected to arrive in Saudi Arabia at the end of 2021 once the final fit-out and tests have been completed. The other four vessels are expected by 2024 – a year later than planned.

The ships are being built under a joint venture between Saudi Arabian Military Industries (SAMI) and Navantia that is expected to help develop the kingdom’s domestic defence industry, provide jobs and improve training.

These were the details of the news Saudi Arabia celebrates launch of new warship for this day. We hope that we have succeeded by giving you the full details and information. To follow all our news, you can subscribe to the alerts system or to one of our different systems to provide you with all that is new.