Thank you for your reading and interest in the news Hajj 2020: Everything you need to know and now with details

Hind Al Soulia - Riyadh - With the ongoing coronavirus pandemic, Hajj 2020 is going to be very different.

Whereas millions usually attend, this year just a few thousand have been given permits and all had to quarantined before arriving.

But what is Hajj, what happens and what will be different this year. The National explains.

This year, Hajj begins on Tuesday, July 28 and ends on Sunday, August 2.

All Muslims able to do so are required to make the Hajj pilgrimage to Makkah at least once in their lifetime. Hajj and the other four pillars of Islam form a foundation of life for Muslims.

The annual pilgrimage to the holiest city for Muslims takes place during Dhu Al Hijjah, the last month of the Islamic calendar.

The ritual literally translates as “to attend a journey”, and denotes both the outward act of physically travelling and the inward act of a person's contemplation of their faith.

Each year, millions of Muslims travel to Makkah to perform Hajj, with many also travelling farther north to the city of Madinah.

In 2019, 2.5 million pilgrims attended Hajj with the Saudi government allocating a set number of permits for each country to avoid overcrowding.

What happens at Hajj?

The world's largest annual pilgrimage, Hajj requires the faithful to repeat a set of rituals first performed by the Prophet Mohammed centuries ago.

The event is a deeply spiritual experience for Muslims, and one every believer aspires to take part in at some point in their life, if they are able.

Those who are unable to perform the pilgrimage for financial or health reasons are exempt. If they can afford it, Muslims can have someone perform Hajj on their behalf, with Sharia advising they fund someone who would otherwise be unable to attend. 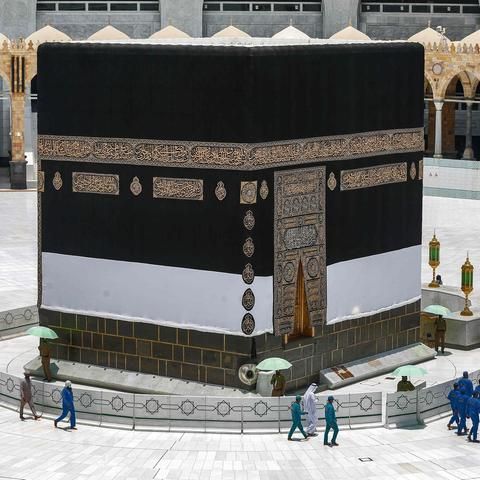 What will be different about Hajj 2020?

This year only around 1,000 people from 160 countries will attend Hajj but the big difference is that all those allowed to go are already residing in Saudi Arabia as the country’s borders remain closed due to Covid-19.

Around 70 per cent of attendees are foreign nationals residing in the kingdom and 30 per cent are locals.

All attendees began a seven-day quarantine last Sunday and will complete a second quarantine at the end of the pilgrimage.

The kingdom has given health workers, staff on the frontlines against Covid-19 and members of the military many of the permits.

But crucially, there will be hefty fines and even jail time for anyone trying to attend without a permit. The security services have erected a cordon around the main Hajj sites to ensure the safety of attendees. Those who are found to be transporting non-permit holders to the sites of Hajj will also be fined.

“Hajj this year is very different and exceptional,” Major-General Zayed Al-Tuyan, commander of Hajj Security, said on Sunday. “Hajj will be in very limited numbers under strict precautionary measures, and we will impose a complete security cordon around holy places and pilgrims during their movements.”

“In the context of Covid-19, pilgrims are advised to keep a safe distance between each other, to wear face masks and gloves and maintain a high degree of personal hygiene by washing hands frequently,” said Olivier Barles, Regional Medical Director at International SOS in Dubai. While Covid-19 is on everyone’s mind, Mr Barles also pointed out that pilgrims should also watch out for heatstroke, dehydration, food poisoning and exhaustion while undertaking Hajj as they would every year.

The measures are to ensure social distancing is possible.

How to prepare for Hajj

Before setting off for Hajj, Muslims must first purify and declare their Niyyah, or intention, to God. Their Niyyah for Hajj should be sincere and for the sake of Allah only, not other worldly matters.

Pilgrims must also enter what is known as a state of Ihram, whereby they prepare their bodies and mind for the rituals ahead. This requires them to recite an intention and adhere to a certain dress code. 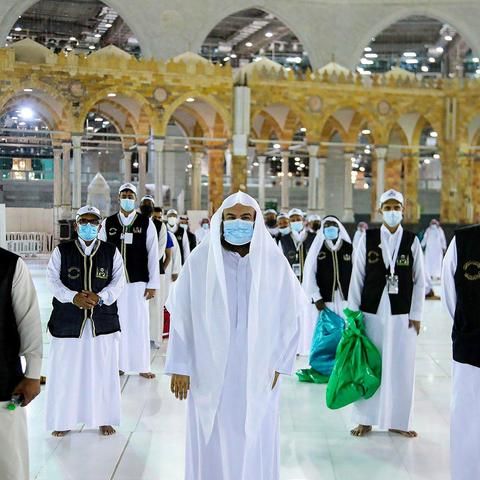 What are the rituals performed during Hajj?

On this day, pilgrims begin their Hajj at the Kaaba.

As they approach the Kaaba, pilgrims must circumambulate in a counterclockwise direction, meant to express the devotion of Muslims praying to one God.

They must then perform Sa’ey, whereby Muslims re-enact the journey by Hagar, the Prophet Ibrahim's wife, as she went between two small hills in Makkah, Al Safa and Al Marwa, looking for water for her son Ismail. Muslims pace between the two points.

Pilgrims then depart for Mina, five kilometres away, where they recite prayers and spend the night in the valley where the Prophet Ibrahim stoned the devil as he tried to lead him astray.

Known as the day of Arafah – a pivotal day of Hajj. After the Fajr prayer in Mina, pilgrims make the journey to Mount Arafat, a 70-metre hill believed to be where the Prophet Mohammed gave his final sermon. Standing and praying on Mount Arafat is considered the peak of the pilgrimage.

Descending from Mount Arafat, pilgrims make their way to Muzdalifah, to the south of Mina, to pray and collect pebbles to perform the last steps of Hajj. It is recommended to collect 70 pebbles. The stoning of Jamrat Al Aqabah typically takes place after midnight.

On this day, pilgrims must stone Jamrat Al Aqabah, the place where the devil is said to have appeared before the Prophet Ibrahim. Here, pilgrims must throw seven pebbles one after the other while saying Allahu Akbar (God is greatest) after each throw. Each pebble should be the size of a fava bean. The act mimics that of the Prophet Ibrahim, who was told by the angel Gabriel to pelt the devil with stones.

After the stoning, Eid Al Adha can be celebrated and the pilgrims' sacrificial animal should be slaughtered. Then, men should either shave their heads or cut their hair, and women should cut the length of a fingertip from their hair.

On these days, pilgrims tend to stay in Mina to stone the three sites of the devil each day to cement their intentions and in the hope that Allah will accept their Hajj.. The first two days, Dhu Al Hijjah 11 and 12, are mandatory while the 13th is not. After that is the final Tawaf Al Ifadha.

Before leaving Makkah, pilgrims, now referred to as Hajjis, shed their white or black robes and don their finest clothes. Makkah becomes a kaleidoscope of colour as pilgrims perform a final, farewell Tawaf known as Tawaf Al Ifadha where they circumambulate the Kaaba one last time. This step is mandatory but pilgrims have up until the end of Dhu Al Hijjah to perform it.

The history of Hajj

Though Hajj has been performed in its current form for more than 1,300 years, some of its elements go back to the time of the Prophet Ibrahim in 1813 BC.

It is said God ordered the Prophet Ibrahim to leave his wife, Hagar, and son, Ismail, alone in the desert of ancient Makkah.

Hagar, desperately searching for water for Ismail, ran between two small hills, Al Safa and Al Marwa, seven times. When she returned to her son, she saw him scratching at the ground and it is said a miracle from God caused a spring to well up beneath them. Today, pilgrims pace between these two mountains as part of the rituals of Hajj in remembrance of that miracle. The site is now the Well of Zamzam.

Even the Kaaba is tied to the Prophet Ibrahim, who built it with the help of his son under orders from God, who told him to invite people to make pilgrimage there. It is said the black stone used to build the Kaaba was supplied by the angel Gabriel, who brought it from heaven.

Some time before Islam was introduced in 610 AD, the Kaaba became a site for pagan worship. Twenty years later, the Prophet Mohammed led his followers from Makkah to Madinah where they destroyed the pagan idols. The Prophet Mohammed performed is first and only Hajj, with a large number of followers, in 632.

Those accompanying the Prophet Mohammed observed his every move and these steps are performed in the same sequence today.

The importance of Hajj

Hajj is a deeply spiritual experience for Muslims.

For many pilgrims, the journey to Makkah is the first time they will leave their countries or board planes. More than half of those performing Hajj visit from low-income countries, and 18 per cent come from conflict-ridden states.

According to Sunnah, or the way of the Prophet, Hajj Al Tamattu is the most preferred method of performing the pilgrimage. Along with Hajj Al Qiran, it differs from Hajj Al Ifrad in that the latter entails performing only Hajj, while the other two require performing Umrah, or minor pilgrimage, before.

In 2018, the Ministry of Hajj and Umrah launched the “Smart Hajj” initiative, providing pilgrims with smartphone apps to help them through the pilgrimage.

The app Asefny allows users to send health reports through their phones and request medical care in emergencies. The app tracks a pilgrim’s location in order to provide them with services or assistance to those with special needs.

The ministry also has the Manasikana app meant to guide pilgrims through every step of Hajj, from signing up for the pilgrimage to their return home. Available in eight different languages, it provides information that includes prayer times and flight schedules, the weather forecast for Makkah, Madinah and Jeddah, emergency numbers, the location of the nearest emergency centre and currency-exchange rates.

These were the details of the news Hajj 2020: Everything you need to know for this day. We hope that we have succeeded by giving you the full details and information. To follow all our news, you can subscribe to the alerts system or to one of our different systems to provide you with all that is new.

PREV Macron tells Europe to ‘stop being naive’ after France signs defense deal with Greece
NEXT FilGoal | News | A French talent coming into...

Expo 2020 Dubai is a new partner for Manchester City’s training...