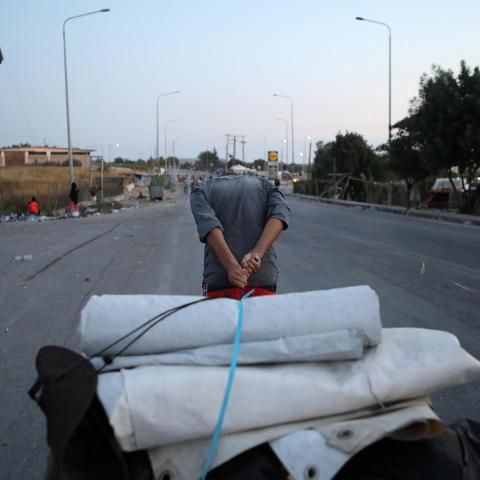 Police on the Greek island of Lesbos on Friday relocated over a thousand more migrants who had been homeless since fires ravaged the country’s largest refugee camp.

The number of people moved to the new army-built camp on the island reached 6,100, officials said, adding that a total of 187 so far have tested positive for coronavirus.

Some migrants carried infants on their backs or pulled plastic vegetable crates loaded with their belongings. Others used trash bins and strollers to transport their clothes and cooking equipment.

Government officials said they expected the operation to last through to Sunday.

More than 12,000 migrants and refugees fled the fires at the Moria camp two weeks ago. Thousands have slept outdoors on a nearby roadside in the nights since then.

Michalis Chrisochoidis, a minister in charge of public order, said that the fire-ravaged camp would be cleared “Moria is over,” he told private Thema radio.

“It will be bulldozed. It is something that should not be remembered. It should not remain in the mind or in the soul of anyone.”

Greece has long received a disproportionate share of MENA migrants. The European Union is preparing to issue proposals next week for a major overhaul of the 27-nation bloc’s migration policies.

These were the details of the news Thousands of Moria migrants moved into new camp for this day. We hope that we have succeeded by giving you the full details and information. To follow all our news, you can subscribe to the alerts system or to one of our different systems to provide you with all that is new.

PREV Does the gender of the fetus affect the mother’s infection with...
NEXT “Thursday’s protests” in Sudan… Fears of the “worst scenario”