Emirati beauty expert Bader Khalaf sparked widespread controversy on social media platforms recently, especially after he published a video showing his sexual transformation from a man to a female, and he wished to become “pregnant” after he surprised his fans with video clips in which he wore clothes similar to the outfits of Jasmine Disney, the heroine of “Aladdin”.

Bader Khalaf did not stop tweeting through his personal account on Twitter, as he touched on the menstrual cycle for men, and he tweeted: “Reassure me, my children, you are fine? How is the dud with you? -Will pregnancy, O Lord, say amen.” 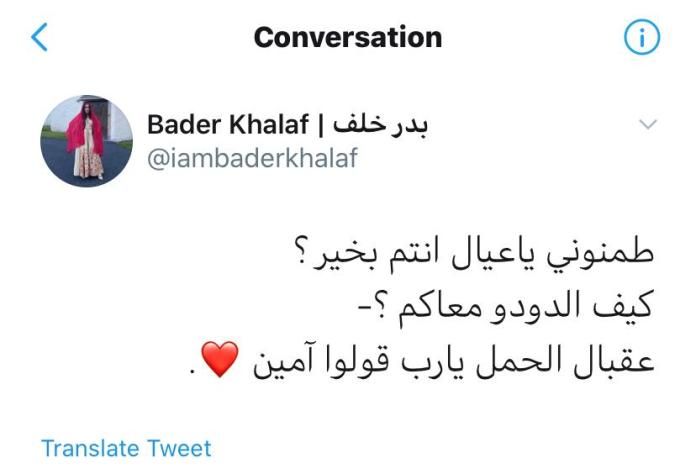 He wrote in another tweet: “In your life, do not see yourself in a way that is not sweet, because people will see you with the same way they do not see yourself, learn and strive for your aspirations and dreams, you will indoctrinate people who will help you for no reason. Life is very beautiful. We know that nothing is impossible. We all appreciate if a prophet did indeed. “ 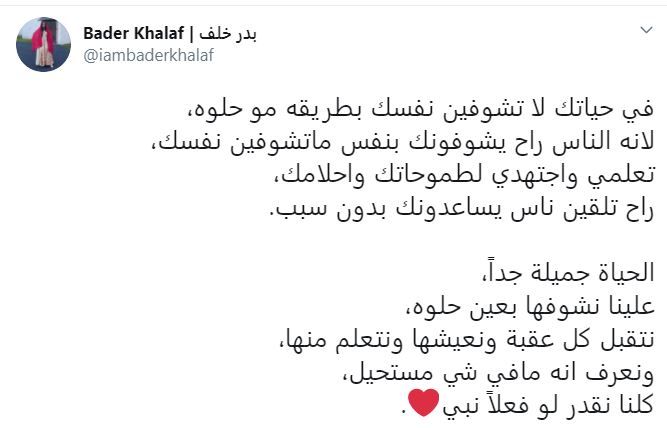 This comes after the Emirati beauty expert, Bader Khalaf, known as “Cake”, resolved the controversy surrounding his male-to-female gender transition. While Badr appeared during the past months in pictures and videos on social media platforms with long hair, he surprised his followers by posting a video clip via His personal account on the “Facebook” site, to show the details of his body, which turned into a female.

Badr Khalaf appeared in the video, which lasts for only 10 seconds, reviewing the details of his body after the transformation of male and female, and he wrote in his commentary on the video, “Behind the scenes before the young man was removed, excited about my shelf? .. How many days left and how many days to wait.” .

Several months ago he appeared on social networking sites “Cake”, a kinetic name for an Emirati beauty expert named Badr Khalaf, who provides videos to women on how to preserve the skin, but because of his style and method, he was called “cake”, until he himself used this name.

What is controversial is that Badr Khalaf sometimes speaks in female form, and recently, he used an application that transforms the male face into female and vice versa, to show his image as a female with long hair, as well as doing some videos in which he puts makeup in an exciting way.

Among the controversial tweets that he wrote recently, “I buy an island and make it special for girls, and her father has passed away for us without the children.” Good and spoiled … so that I do not come and say my own clothes. ”

Last January, he published his picture naturally wearing a T-shirt and shorts, without any feminine features, and commented on the photo, saying, “The day I was in the men’s team two years ago … your clothes are better with short or long hair.” Another popular name other than “cake”.

These were the details of the news Beauty expert, Bader Khalaf, after his body transformed into a female:... for this day. We hope that we have succeeded by giving you the full details and information. To follow all our news, you can subscribe to the alerts system or to one of our different systems to provide you with all that is new.

Facebook: The company employs 10,000 people in Europe to develop the...

Facebook hires an army of engineers to build its virtual world

Report: “Facebook” only removed 2% of hate speech posts on its...