Hind Al Soulia - Riyadh - International students in the UK are considering packing their bags and going home amid anger over how universities have handled the coronavirus crisis.

A massive rise in cases has left university cities such as Sheffield, Leeds and Oxford on the brink of local lockdown.

Manchester Metropolitan University - popular with international students - is among the worst affected with 1700 students asked to self-isolate.

Mohammed Eissa, who is studying material sciences and engineering at the University of Sheffield, told The National the sharp rise in coronavirus cases has left many international students weighing up an early return home.

A total of 474 students and five members of staff tested positive for coronavirus at the University of Sheffield yesterday.

Mr Eissa said: “The increasing number of cases among staff and students is indeed alarming and, as students, we’re constantly monitoring those numbers coming officially from the university website which is updated very frequently.

“Now we’re aware the cause of those infections is definitely not just university but as of now, we are convinced our attendance would only take place if it’s an absolute must which is not until semester 2.

“Some students who are currently in Sheffield are even considering a possibility of return.”

On Sunday, authorities revealed an IT error led to nearly 16,000 cases being accidentally left off the country’s official tally, causing several parts of the UK to be put on the coronavirus “watch list” and at risk of tighter restrictions.

Thousands of students across the UK had already been locked inside their dorms as the epidemic spiralled out of control in halls of residence, putting universities under huge pressure to refund student fees.

A petition demanding that universities refund tuition fees has so far gathered more than 200,000 signatures.

Mohammed Fakhri, president of Glasgow University’s Middle Eastern and North African Society, who is from Iraq, said international students were also facing other pressures such as the increasing difficulty of finding somewhere to live.

Glasgow is among 45 universities across the UK to be affected by coronavirus outbreaks.

He said some students were holed up in hotels for extended periods as they tried to secure suitable permanent accommodation.

“Even when there is no pandemic the logistics of moving to a new place is really hard, it’s now a whole lot harder,” he said.

“A lot of students are in hotels. Others are staying in their current residence even if they don’t like it.

“It's a really difficult time but we’re trying to salvage as much as we can.”

Appearing on BBC’s Radio 4 Today programme today, Universities UK president Professor Julia Buckingham was challenged over whether enough was being done to promote welfare, as students had previously complained over a lack of information, support and even food.

Prof Buckingham insisted: “Individual universities have very clear procedures that they are following to report their return to universities.

“Many universities are providing far more mental health support than they do normally.”

However, the majority of international students The National spoke to felt that was not a viable option.

'I won't see my family for a long time'

Mohammed Al Bastaki, an aeronautical engineering student at the University of Sheffield, said it would not be worth going home to the UAE given the need to quarantine.

“I hope we don't have to go into lockdown again, but it's starting to become more and more likely,” he said.

“I'm not planning to go home in the winter break, because it is only a month long and most of that would be spent in quarantine, but if we're locked down next summer that'll be a big blow for me.

“I won't be able to see my family for the longest time.”

Mr Al Bastaki said it felt like the “UK was a lot more relaxed than the UAE” when it came to controlling Covid-19.

He said: “The UAE's system seems to be a lot more thorough and comprehensive. We have temperature checks everywhere.

“Getting a test is a lot more accessible and easier for many people.

“Meanwhile, in the UK not many people wear masks, I've noticed, unless they are required to do so in like a store or a coffee shop, but walking on the street, even in the city centre even if it's really crowded, people seem to neglect wearing masks. And social distancing isn't followed as strictly as it is in the UAE, or so I've seen.”

Fatima Al Qannati, who is studying material science and engineering at Sheffield, added: “In the UAE, wherever you go there are regular temperature checks - that might not be the case in the UK.” 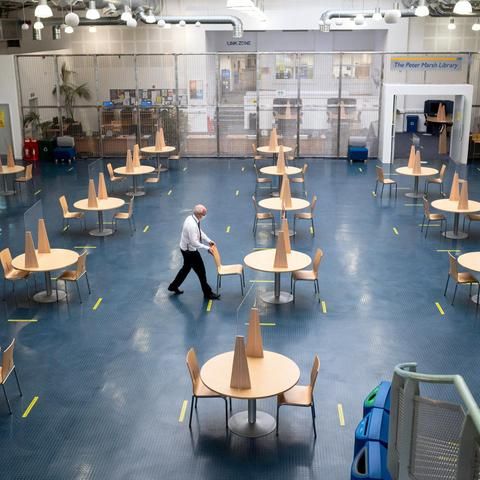 And engineering student Hood Al-Noamani, who is studying at the University of Strathclyde, also based in Glasgow, said the shift to online learning was difficult.

“Normally we’d be in labs,” he said. “You’d be working with other people and you’d have the opportunity to ask a lot of questions. It’s much better than doing it virtually.”

The second-year student is now preparing for the pandemic to last for the remainder of his degree but remains determined not to let it deter him from completing the course.

“Even if it stays like this I need to finish,” he said. “If I didn’t have this degree I wouldn’t have anything to do.”

Meanwhile, asked about the possibility of fees being refunded, the UK’s universities minister Michelle Donelan warned educational institutions they should be upfront about what students were getting for their money.

She told MPs: “We’ve sent a very clear message out that they need to be transparent about what students could expect.

“Students are in fact customers … institutions need to be transparent about what they can offer in terms of student experience.”

These were the details of the news New lockdown for university cities could force international students to leave Britain for this day. We hope that we have succeeded by giving you the full details and information. To follow all our news, you can subscribe to the alerts system or to one of our different systems to provide you with all that is new.

PREV Emirates News Agency – Dubai Digital concludes its participation in GITEX...
NEXT The first comment from the Tunisian Renaissance Movement on the appointment...