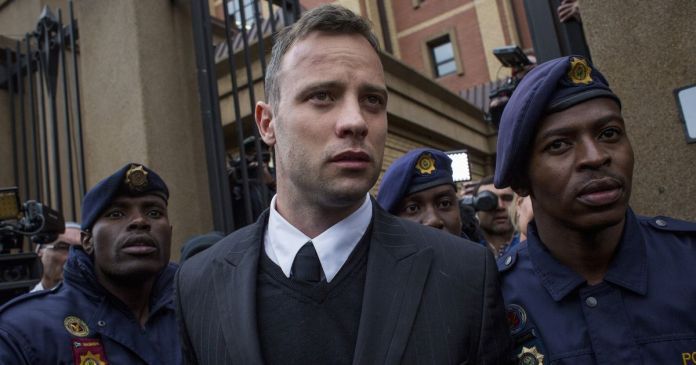 Oscar Pistorius has reportedly said he wished forgiveness to the family of his victim Reeva Steenkamp.

The murderous Paralympic athlete, who was jailed for 15 years for shooting his girlfriend Reeva, told a friend he was desperate for her family to accept his apology.

He reportedly said, “I want to tell you I’m sorry.”

Bill Schroder, 76, claimed that Pistorius turned to God and was more concerned about forgiveness than probation.

He told The Sun on Sunday, “What he really, really wants is forgiveness.

“I said to him that if he killed my daughter I doubt I would forgive him.

“He’s more concerned about forgiveness than parole. In fact, he’s genuinely afraid of parole, knowing they’ll be a backlash. ”

Mr Schroder said Pistorius continues to claim the murder was an accident.

Pistorius is currently in a prison north of Pretoria, South Africa, specially set up for inmates with disabilities.

Pistorius was initially imprisoned for six years after being convicted of the murder of Reeva on Valentine’s Day 2013, which attracted worldwide interest.

He claimed she went to the bathroom and he woke up believing she was a burglar when he opened fire.

These were the details of the news Oscar Pistorius desperate for forgiveness from the Steenkamp family – “I... for this day. We hope that we have succeeded by giving you the full details and information. To follow all our news, you can subscribe to the alerts system or to one of our different systems to provide you with all that is new.