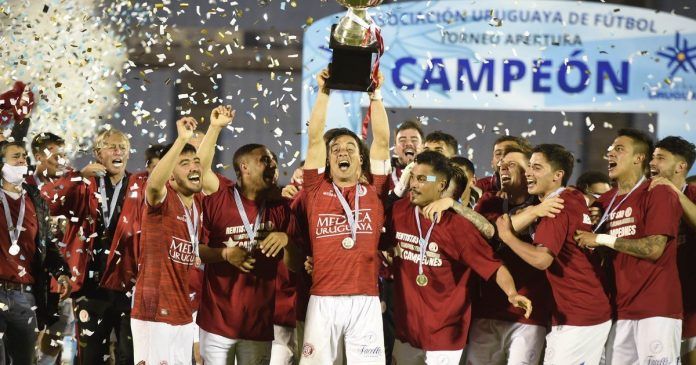 Rentistas made history by winning the Opening Tournament From Uruguay. The humble -despite its curious name- club from the Cerrito de la Victoria neighborhood showed great strength despite being a humble neighborhood club from its beginnings. It was his first title in the First Division and nothing less than against a great as National.

The history of the club began in 1933. It was founded by a group of young people whose sole motto was to play soccer. At first it was difficult for them to find a name, while the neighbors who saw them play felt annoyed due to the bullfights and games at all hours. They say in the neighborhood that one day the former referee Esteban Marino had the idea to ask them: “What is wrong with you who are here all day and don’t work? Are you rentiers?” And the occurrence of Emilio Pronzolino, one of those boys, arose, who decided to name the nascent club of the place: Rentistas.

With that, they also began a continuous struggle to give hierarchy to the institution they created. The first three years were dedicated to the dispute of friendlies, until in 1936 they joined the now defunct Centennial League, where they were champions for 3 consecutive years.

But not everything was rosy, in the 40s the club was on the verge of disappearing due to financial problems. The love of his fans, who took control, kept him afloat and in 1947 he was enrolled in the Uruguayan soccer association. In principle, they served in the Extra B division, after being champions in their second year they went on to Extra A and when they were crowned again in 1948 they achieved the expected promotion to the Intermediate Division.

After hard years, of playing 11 years in a row with the same set of shirts and back and forth between the extra and intermediate divisions, in what seemed something historic and unimaginable for that neighborhood club, in ’66 he was promoted to B and not only stayed there but in 1971 he got his first promotion to the first division.

Its last big change was in 2018, when the team was in the second division and an agreement was signed to become a SAD (Sports Limited Company), as has already happened with other Uruguayan soccer teams.

Boston River, Plaza Colonia, City Torque, Deportivo Maldonado Y Rentistas they are, with mixed luck, the SADs in the first division. And Rampla Juniors, Youth of Las Piedras, Albion and South America, in the second.

In 2019 the expected promotion to first came for Rentistas and in just one year he was crowned champion for the first time in its history and, as if that were not enough, winning a final against Nacional, one of the powers of Uruguay.

*The article has been translated based on the content of Source link by https://www.clarin.com/deportes/rentistas-humilde-campeon-marco-hito-uruguay-curiosa-historia-nombre_0_5jGas4wNB.html
. If there is any problem regarding the content, copyright, please leave a report below the article. We will try to process as quickly as possible to protect the rights of the author. Thank you very much!

These were the details of the news Rentistas: the humble champion who marked a milestone in Uruguay and... for this day. We hope that we have succeeded by giving you the full details and information. To follow all our news, you can subscribe to the alerts system or to one of our different systems to provide you with all that is new.

PREV Laschet is at the mercy of the elections.. 3 scenarios awaiting...
NEXT Young people in Britain pray more than the elderly