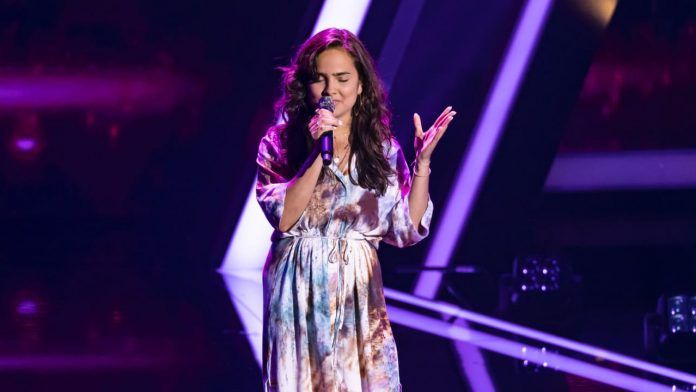 Upside down world with “The Voice of Germany” (ProSieben)!

Actually, it’s the talents who sing for a place in the battles – but on Thursday evening the jury fought a singing battle for mega talent Hannah (23)!

She almost didn’t end up on the TVOG stage at all. Because Hannah from Munich had actually already started studying politics and even moved to Asia for six months. But instead of studying, she performed there in the evening in beach bars.

The Munich resident: “I remember when I was on stage, saw the sunset on the beach and thought: There is no other way for me.” Music instead of politics – at the end of the trip it was clear: Hannah’s studies were over . Instead, she enrolled at the jazz school in Munich and relied fully on music. Much to the delight of the jury!

Because three buzzers later it was clear: Mark (37), Niko (27) and Team Catterfeld / Kloß absolutely want the 23-year-old in their team!

Big cheers from Hannah – especially about Niko Santos! The Munich resident in the direction of the pop star: “I actually only sang that for you.”

But the competition didn’t give in that quickly! Silbermond front woman Stefanie Kloß (35): “We can bring a bit of mood into the house, just so you can see how much energy there is in this women’s double chair.”

Stefanie Kloß started with “Lady Marmelade”! Even Niko Santos widened his eyes. However, the singer was not intimidated by this. On the contrary: he even went one better with a “Purple Rain” cover!

Mark Forster also came on stage for a serenade and, to the delight of juror Samu Haber (44), played the super hit “Hollywood Hills” by his band Sunrise Avenue. However, he couldn’t score points with Hannah. She decided on the “Lady Marmelade” team!

Cheers with Stefanie Kloß and Yvonne Catterfeld (40) – the ladies win the battle for talent Hannah!

Not the only reason for both of them to be happy! Because all star Juan Geck (28) is making a comeback in Yvonne Catterfeld’s team. She, of all people, kicked him out in the third round of the battles in 2017, but now describes that as a mistake – which she can now make up for.

*The article has been translated based on the content of Source link by https://www.bild.de/unterhaltung/tv/tv/the-voice-of-germany-um-dieses-talent-lieferte-sich-die-jury-ein-gesangs-battle-73431248.bild.html
. If there is any problem regarding the content, copyright, please leave a report below the article. We will try to process as quickly as possible to protect the rights of the author. Thank you very much!

These were the details of the news “The Voice of Germany” – The jury fought a vocal battle... for this day. We hope that we have succeeded by giving you the full details and information. To follow all our news, you can subscribe to the alerts system or to one of our different systems to provide you with all that is new.