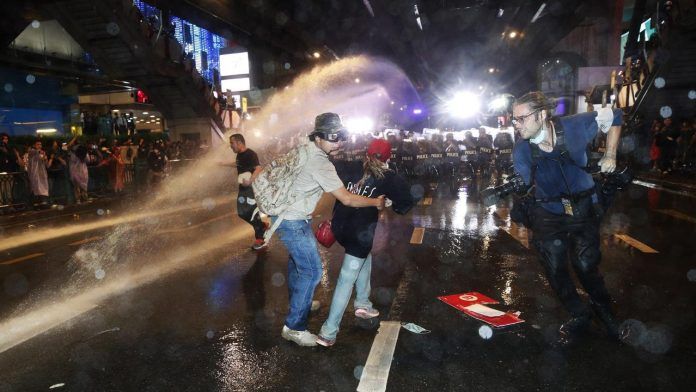 Thai police put an end to massive anti-government demonstrations on Friday with the use of water cannons. Tens of thousands of Thai people have been demonstrating against the government of Prime Minister Prayuth Chan-o-cha and the king for almost three months.

A day earlier, the Thai government imposed emergency regulations banning the demonstrations. That did not stop the protesters, mainly young people and students, from taking to the streets on Thursday and Friday.

When the protesters did not heed the call to leave, the officers deployed water cannons containing a chemical liquid. They also used clubs to disperse the crowd.

The organization then heralded the end of the protest. 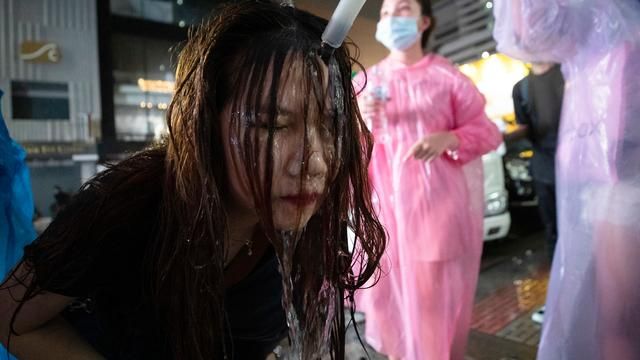 A protester washes her eyes after the demonstrations. According to international journalists, the water cannons contained a chemical liquid that irritated the eyes. (photo: ANP)

The protesters demand the prime minister’s resignation and want previously arrested activists to be released. They also want the monarchy to be reformed.

The government and the king have been grappling with the rallies for months, which are seen as the greatest challenge facing the Thai elite in years.

Friday can be seen as the biggest escalation of the protests to date. Previously, the riot police did not use much violence against the demonstrators. Over forty demonstrators, including some protest leaders, were arrested in recent weeks.

Criticism of Thai king is growing

A pre-recorded video of King Rama X was shown on Thai television after the protests. In it he called for patriotism and respect for the monarchy. He did not respond to the mass demonstrations.

That the protesters are critical of the power of the king is unique. In Thailand there are very high prison sentences for lese majesty. The royal family is generally respected by the Thai, but after a series of scandals with Rama X, who became king in 2016, criticism grew.

While the corona crisis has left millions of Thai unemployed, the king leads an exuberant and luxurious life in an expensive villa in Bavaria, Germany. This year he spent only a few weeks in Thailand.

*The article has been translated based on the content of Source link by https://www.nu.nl/buitenland/6084510/thaise-politie-zet-waterkanonnen-in-om-massale-protesten-te-beeindigen.html
. If there is any problem regarding the content, copyright, please leave a report below the article. We will try to process as quickly as possible to protect the rights of the author. Thank you very much!

These were the details of the news Thai Police Deploy Water Cannons to End Mass Protests | ... for this day. We hope that we have succeeded by giving you the full details and information. To follow all our news, you can subscribe to the alerts system or to one of our different systems to provide you with all that is new.

PREV Young people in Britain pray more than the elderly
NEXT FilGoal | News | A French talent coming into...