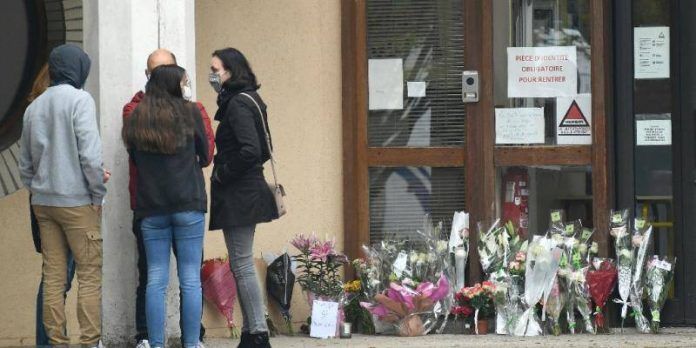 The message of demands posted on Twitter with the photo of the history professor beheaded on Friday near a college in Conflans-Sainte-Honorine was published on an account belonging to the assailant shot by the police, Abdoullakh Abouyezidovich A., said Saturday, October 17 the national anti-terrorism prosecutor.

“The investigations were able to confirm that it was indeed an account belonging to the author of the facts”, said Jean-François Ricard during a press conference at the Paris court.

The first exploitation of the attacker’s phone, found near his body, “made it possible to find in the notepad the text of the claim, recorded at 12:17 p.m. as well as the photograph of the deceased victim, time-stamped at 4:57 p.m.”, he added.

“Unknown to the intelligence services”

Abdoullakh A., “born March 12, 2002 in Moscow, Russia” and who enjoyed refugee status, was shot dead by police while “ran in their direction shooting five times with a handgun”, explained the prosecutor.

According to his account, three policemen retaliated, causing the assailant to fall. “As he tried to get up and stab the police officers, he was neutralized by the police”, he said, indicating that his body presented “nine impacts” ball.

The police found him “a dagger type knife, an Airsoft type handgun and five gas cartridges compatible with this weapon”.

Otherwise, “a second knife with a total length of 35 centimeters, bloodied, was discovered about thirty meters from the scene of the crime”, said Mr. Ricard.

The aggressor, who lived in Evreux (Eure) and had a residence permit issued on March 4 and valid until March 2030, “was unknown to the intelligence services on a judicial level”.

“He was never convicted although he was known for cases of degradation of public property and violence in meetings, while he was still a minor”, said the prosecutor.

In addition, according to Mr. Ricard, among the nine people currently in police custody is the father of a pupil of the decapitated professor, who had notably called on social networks for the mobilization against the latter and his dismissal from the establishment. after a class in which the teacher showed caricatures of Muhammad.

“The half-sister of this man had joined the Islamic State organization in 2014 in Syria and she is, as such, the subject of a search warrant by an anti-terrorism investigating judge”, said Mr. Ricard.

Another man, “known to intelligence services” and who notably participated in videos published by the student’s father, is also in police custody with his wife.

*The article has been translated based on the content of Source link by https://www.nicematin.com/faits-divers/professeur-decapite-le-message-de-revendication-publie-sur-twitter-emanait-bien-de-lagresseur-abattu-589218
. If there is any problem regarding the content, copyright, please leave a report below the article. We will try to process as quickly as possible to protect the rights of the author. Thank you very much!

These were the details of the news Decapitated professor: claim message posted on Twitter did indeed come from... for this day. We hope that we have succeeded by giving you the full details and information. To follow all our news, you can subscribe to the alerts system or to one of our different systems to provide you with all that is new.

PREV After mobilizing forces, the United Nations warns of “atrocities” in Myanmar
NEXT The first comment from the Tunisian Renaissance Movement on the appointment...