Tons of rockets, spacecraft, and instruments have been launched into space since the space age began in 1957. At first there was no plan what to do with them at the end of their life. Since then, the number has continued to rise, and space explosions and collisions have created hundreds of thousands of shards of dangerous debris.

Despite advances in technology and an understanding of the space environment, the largest European conference on space debris identified the need to significantly increase the pace of application of the proposed measures to reduce debris. Photo credits: ESA, CC BY-SA 3.0 IGO

“The biggest contributor to the current problem of space debris is orbit explosions caused by residual energy – fuel and batteries – on board spacecraft and rockets. Although steps have been taken to prevent this for years, we are not seeing any decline in the number of such events. The trends for disposal at the end of the mission are improving, but only slowly, ”explains Holger Krag, head of the space security program.

The number of debris objects, their total mass, and the total area they occupy have steadily increased since the beginning of the space age. This is further driven by a large number of orbital spacecraft and rocket stage separations.

The total area that space debris takes up is important as it is directly related to the number of collisions we expect in the future. From today’s perspective, it is predicted that collisions between debris and functioning satellites will overtake explosions as the dominant source of debris. 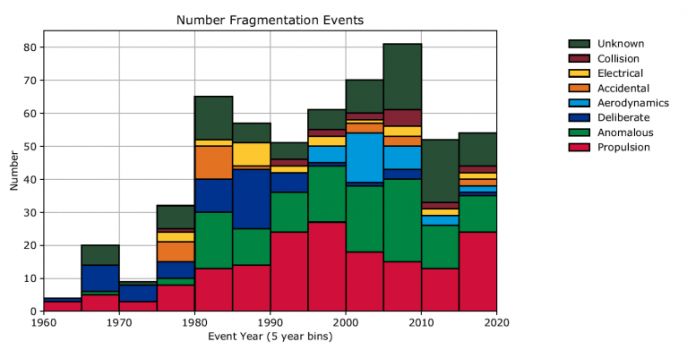 There are many ways that debris can form in space. For each “fragmentation event”, thousands of pieces of dangerous debris can be added to orbit. Image credit: ESA

On the bright side 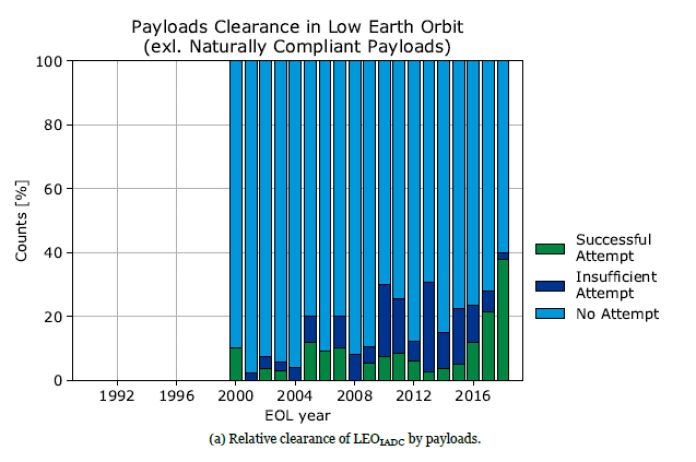 More satellites or “payloads” that are sent into low-earth orbit are trying to sustainably adhere to the measures to reduce debris than 20 years ago. However, progress is still too slow. Image credit: ESA

While not all satellites currently comply with international guidelines, more and more space actors are trying to abide by the rules. Over the past decade, 15-30% of objects or “payloads” launched into non-conforming orbits in the low-earth orbit region (excluding spacecraft related to human spaceflight) had attempted to comply with debris reduction measures . Between 5% and 20% were successful, peaking at 35% in 2018 due to active orbit from the Iridium constellation. 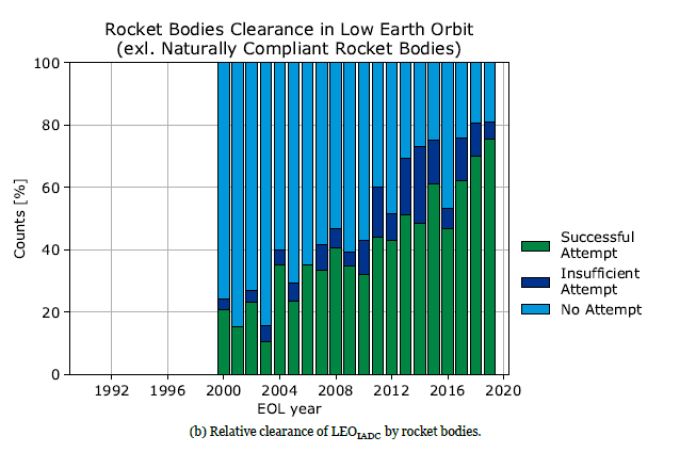 80% of the missiles fired are now attempting to “clear” low-earth orbit – the vast majority of them successfully – from a little over 20% at the beginning of the millennium. Image credit: ESA

More missiles will be safely disposed of

When it comes to missiles, more and more are being disposed of sustainably. During that decade, between 40 and 80% of people in non-compliant low-earth orbit attempted to comply with debris reduction measures. In total, 30-70% of the naturally non-compliant missiles have successfully completed low-earth orbit.

Of all missiles fired in the past decade, 60-80% (measured by mass) followed mitigation measures. Some rockets are in low-Earth orbits that cause them to naturally decay in the Earth’s atmosphere. However, a significant number of missiles are diverted back into the earth’s atmosphere, where they either burn up or return via uninhabited areas. Such practices are on the rise, and as of 2017, around 30% of missiles are returning safely in a controlled manner.

This is very good news. Missile bodies are among the largest objects we send into space and there is a high risk that they will be involved in catastrophic collisions. Celebrate all of the steps taken to ensure that they are in orbit no longer than 24 hours after takeoff. 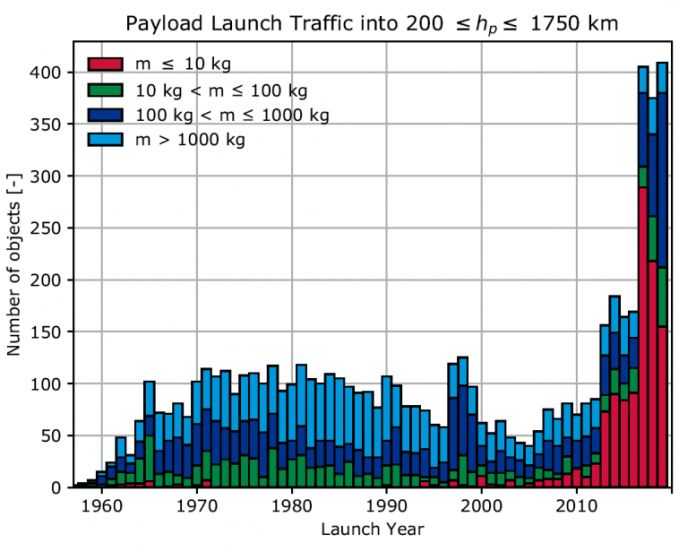 The number of small satellites put into near-earth orbit has increased dramatically over the past 10 years, partly due to the increase in satellite constellations. Image credit: ESA

Other satellites are in low-altitude orbits where they naturally burn

The volume of traffic in the near-earth protected region – up to 2000 km altitude – changes considerably, especially due to the spread of small satellites and constellations.

Around 88% of the small payloads brought into this region naturally adhere to space debris mitigation measures due to their low altitude, which means they will break up in Earth’s atmosphere.

It is estimated that 30-60% of total satellite mass (excluding human space travel) adhere to end-of-life guidelines for the same reason.

“The accelerated increase in the number of satellites being put into low-earth orbit is clearly visible in our latest report,” said Tim Florer, head of ESA’s space debris office.

“We have seen fundamental changes in the way we use space. In order to continue to benefit from the scientific knowledge, technology and data associated with operations in space, it is important that we better adhere to the existing guidelines for reducing space debris in the design and operation of spacecraft. It cannot be emphasized enough – this is essential for the sustainable use of space. ” 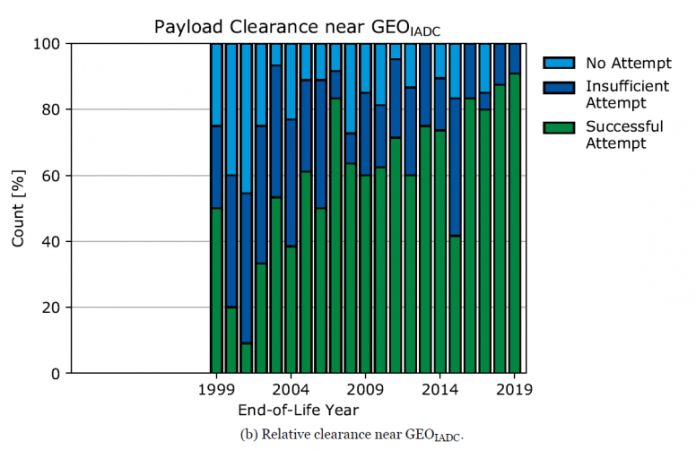 Over the past few years, all satellites in geostationary orbit have made several attempts to responsibly evade each other once they have reached the end of their mission. Image credit: ESA

Satellites launched into the geostationary protected region at an altitude of 35,586 to 35,986 km very often adhere to measures to reduce debris. Between 85% and 100% who reached the end of their life in that decade tried to adhere to these measures, of which 60-90% did so successfully.

In geostationary orbit, operators have a clear commercial interest in keeping their paths clear of defunct satellites and debris. Otherwise, the spaceship and the end result would be seriously jeopardized.

Systematic analysis of changing behavior in space with a view to introducing debris reduction measures gives rise to cautious optimism – this was not the case a decade ago.

If implemented quickly, sustained investment in new technology to passivate and dispose of missions will enable our environment to cope with the continued rise in space travel and increasingly complex operations. 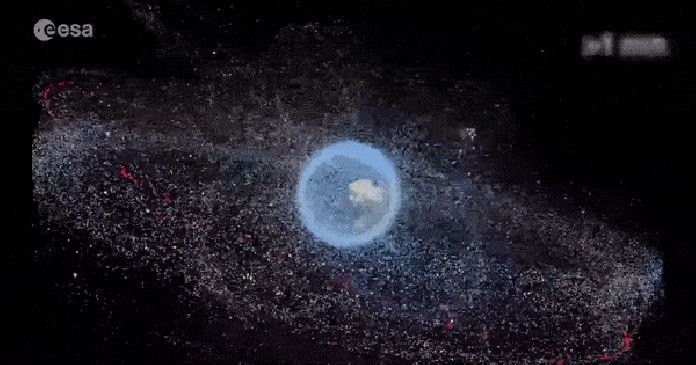 Distribution of space debris around the earth. Image credit: ESA

We need to think of the space environment as a common and finite natural resource. The continued formation of space debris leads to Kessler syndrome, when the density of objects in orbit is high enough that collisions between objects and debris create a cascading effect, with each crash creating debris which then increases the likelihood of further collisions. At this point, certain orbits around the earth become completely inhospitable.

ESA is actively working to endorse the guidelines for the long-term sustainability of space activities of the UN Committee on the Peaceful Uses of Outer Space, including funding the world’s first mission to remove a piece of debris from orbit and help create an international mission Assess the sustainability of space and develop technologies to automate collision avoidance and reduce the impact of space missions on our environment.

Learn about ESA’s Space Debris and Clean Space Offices, both part of the Space Security Program, and about the agency’s upcoming space debris conference – the world’s largest on the subject – in April 2021.

These were the details of the news Threatening our future in space for this day. We hope that we have succeeded by giving you the full details and information. To follow all our news, you can subscribe to the alerts system or to one of our different systems to provide you with all that is new.

PREV Foods that increase cholesterol
NEXT Surprise paper.. Learn about the formation of Egypt against Libya