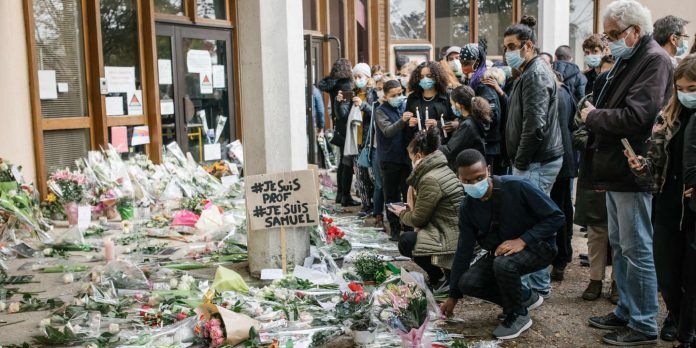 This is a question that has haunted the people of Conflan since the beheading of Samuel Paty: how a “Minor incident” could it lead to the murder of an incredible violence of a teacher ” kind “, “Funny” and “Passionate about his job” ?

In the aftermath of the tragedy, Saturday October 16, they were more than a thousand – teachers, students, parents, residents and elected officials – to gather in front of the doors of the college of Bois-d’Aulne, in Conflans-Sainte-Honorine (Yvelines ), to pay tribute to this history-geography teacher “Massacred”, in the words of a policeman, less than 300 meters away, in the middle of the street and in broad daylight, by a 19-year-old refugee of Chechen origin, killed by the police shortly after his action.

Read also Conflans attack: what we know from the investigation after the murder of a teacher

In “This small suburban town with provincial charm”, describes the humorist Yassine Belattar, born in Conflans-Sainte-Honorine, where part of his family still lives, there is of course sadness, anger too, astonishment, and questions, a lot of questions on the genesis of “This drama that should never have happened”, says Claire (the names have been changed), 14, a student of Mr. Paty for two years.

“Such an event? Here ? It was unthinkable ”, laments Brahim, who has been piloting a mosque project in Conflans for ten years, financed only by money from the faithful – the land has been bought, 300,000 euros are missing for construction. The project, he points out, never created tensions in the city.

Was it the lie of a teenage girl who hid from her father the real reasons for his temporary exclusion that started it all? A misunderstanding about the teacher’s teaching approach? The obsession of a father, persuaded to defend his daughter, who chose to settle accounts on social networks rather than having an explanation face to face with the teacher? The bad faith of a family which did everything to convince itself of the Islamophobia of a professor, and which ended up convincing others, including the young Chechen? Claire “Understands nothing”.

The course on freedom of expression that sparked the wrath of this father, “Mr. Paty gives it to his 4e ». And every year, she says, he uses the same photo to support his point: a caricature of the Prophet Muhammad. “And that had never been a problem, never until last week”, insists Sabrina, 14, a former student today in 3e which evokes a professor who “Liked slideshows a lot.”

You have 72.41% of this article to read. The rest is for subscribers only.

*The article has been translated based on the content of Source link by https://www.lemonde.fr/societe/article/2020/10/18/attentat-de-conflans-comment-un-incident-mineur-est-devenu-hors-de-controle_6056460_3224.html
. If there is any problem regarding the content, copyright, please leave a report below the article. We will try to process as quickly as possible to protect the rights of the author. Thank you very much!

These were the details of the news how a “minor incident” got “out of control” for this day. We hope that we have succeeded by giving you the full details and information. To follow all our news, you can subscribe to the alerts system or to one of our different systems to provide you with all that is new.

PREV A Lebanese engineer in Venezuela’s relations with Iran has become in...
NEXT Lebanese Minister of Justice: Judge Tariq Al-Bitar is the master of...