Madeleine Berger Bin Nasser, the advisor to the French ambassador to Tunisia, hinted that he would leave the country if the immunity of Parliament Rached El-Khayari was not lifted and he would be tried for “glorifying terrorism.”

The threat of the French diplomacy came following a post published by the Tunisian MP on the crime of beheading a professor near the capital Paris on Friday, in which Rashid Al-Khayari said, “Insulting the Messenger of God, may God bless him and grant him peace, is the greatest of crimes.

The French Chancellor said, on her Facebook page, that she “no longer knows Tunisia as a country of tolerance,” noting that Chapter Six of the Tunisian Constitution protects freedom of belief.

She commented, “By affirming that the Tunisian constitution guarantees the freedom to practice religious rites, and that the state is responsible for spreading the values ​​of tolerance and moderation.”

The French chancellor’s post sparked controversy in Tunisia, prompting her to withdraw it from her page. 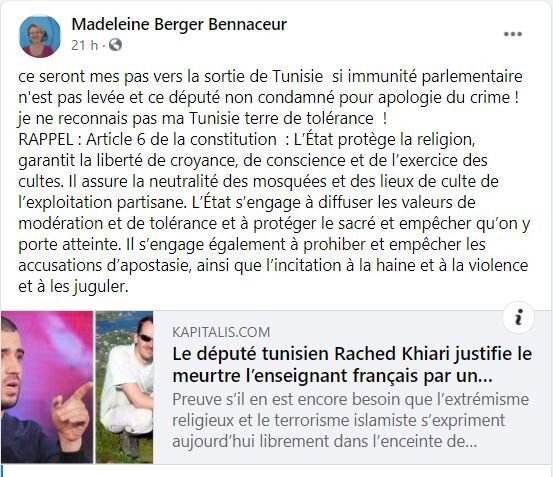 The Deputy Prosecutor and Head of the Media and Communication Unit at the Court of First Instance in Tunis, Mohsen El-Daly, stated that the Public Prosecutor at the Judicial Pole for Combating Terrorism pledged on Saturday to open an investigation into the post published by Rashid El-Khayari.

In a statement to the Tunis Africa News Agency, Daly said that this post “has been legally adapted as a terrorist crime, applying the Tunisian anti-terrorism law, as it may constitute glorification and praise of that terrorist operation.”

In response to the Public Prosecution’s move, El-Khayari posted a tweet in which he said, “It is possible for him to waive his parliamentary immunity.”

On Friday, the French police announced that they had shot dead a young man who had slaughtered a teacher in a preparatory school on the outskirts of the capital, Paris, after the latter offered drawings of the Prophet Muhammad in a class on “freedom of expression.”

These were the details of the news The advisor to the French ambassador to Tunisia calls for the... for this day. We hope that we have succeeded by giving you the full details and information. To follow all our news, you can subscribe to the alerts system or to one of our different systems to provide you with all that is new.

NEXT The crisis in Tunisia: Kais Saied dismisses two ministers