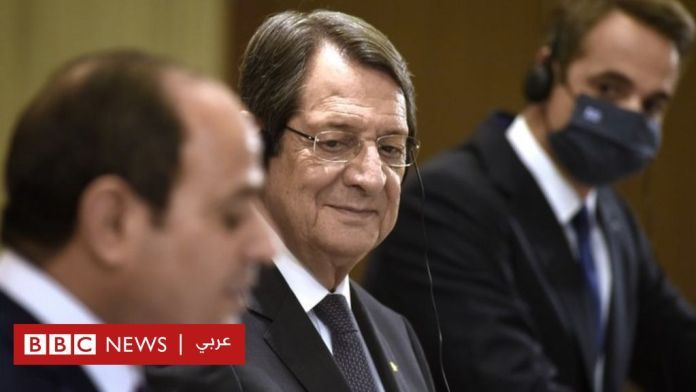 Egyptian President Abdel Fattah El-Sisi welcomed the maritime agreement between Egypt, Greece and Cyprus, and said that he had agreed with the leaders of the two countries to confront “provocative and escalatory policies” in the eastern Mediterranean region, in a clear reference to Turkey.

Al-Sisi accused Turkey indirectly of destabilizing the region and sending mercenaries to neighboring countries, and said that “the three countries reject any foreign military presence in Syria.”

The eastern Mediterranean region experienced tensions last August when Ankara sent a research ship to a disputed region to search for oil and gas reserves.

Greece described this step as a “new dangerous escalation,” and the European Union supports Cyprus and Greece against Turkey.

‘The spirit of international law’

“The cooperation between the three countries in the issue of extracting gas from the eastern Mediterranean is not only an example of international cooperation and preserving the stability of the region, but rather an agreement on joint gas projects to benefit from huge sources of gas in the eastern Mediterranean region for the benefit of all parties,” Al-Sisi said. A country with its sovereign rights. “

Al-Sisi praised the two agreements to demarcate the maritime borders with Cyprus and Greece, describing them as two agreements reached in the spirit of international law and the United Nations charters that govern the laws of the sea.

“Our meeting today witnessed constructive discussions that reflected consensus on a common regional vision and regarding international developments, especially in the eastern Mediterranean region in light of the provocative policies represented by violations of international law, and the threat to use the armed forces in violation of the sovereign rights of neighboring countries, support for terrorism and extremism,” Sisi said. Foreign fighters to conflict zones. “

These were the details of the news Sisi: We have agreed with Cyprus and Greece to confront “provocative... for this day. We hope that we have succeeded by giving you the full details and information. To follow all our news, you can subscribe to the alerts system or to one of our different systems to provide you with all that is new.

NEXT Fully vaccinated expats can return to Kuwait as of Sunday

Zamalek sets the age of the new foreign striker at 22...

What does ‘view once’ mean for photos on WhatsApp?

A year after the explosion of Beirut Port.. Families of victims:...