Sweden has advised residents in the south of the country to severely limit their social interactions after a surge in case numbers over the past week and warnings that the situation is likely to get worse.

The Swedish Health Department advised residents of the northern Uppsala region last week to avoid public transport and not meet anyone outside their household for two weeks.

The same advice has now been given in Scania’s southernmost region, but for a period of three weeks.

Health officials also said people should avoid gatherings and cultural events and stay away from indoor spaces such as shops, museums, libraries and gyms.

While other countries struggling to contain a second wave of the coronavirus pandemic are introducing binding restrictions, the measures in Sweden are recommendations only and not legally binding.

“This is a tough autumn and it will likely get worse before this is over,” said state epidemiologist Anders Tegnell at a press conference.

“Last week the number of new cases increased by 70% compared to the previous week, one of the largest increases we have ever seen,” said Tegnell.

Talks are ongoing with other local authorities about a possible extension of the advice to other parts of the country, he added.

Sweden is known to have opposed the type of mandatory lockdown in other parts of Europe, preferring to address people’s sense of responsibility instead.

The Swedish royal family attended the inauguration of Slussbron’s new “golden bridge” in Stockholm earlier this week and no one in attendance wore face coverings.

Face covering is also not mandatory in Sweden on public transport or indoors.

We need your consent to load this Rte player contentWe use rte-player to manage additional content that can set cookies on your device and collect data about your activities. Please check their details and accept them to load the content.Manage settings

French officials said tighter restrictions are looming to counter an alarming surge in Covid-19 cases. Doctors warned that many hospitals were only a few days away from overloading patients.

“At some point we will have to make difficult decisions … like our neighbors,” he said, referring to tough new measures announced for Italy, Spain and elsewhere in Europe.

Authorities imposed a curfew this month that currently requires around 46 million people – two-thirds of the population – to be home by 9 p.m. as the number of virus cases has increased every day.

According to media reports, President Emmanuel Macron, who has held a crisis meeting with ministers, could extend the curfew, possibly with a full lockdown on weekends, or order targeted lockdowns for the hardest-hit regions.

Another option could be to postpone the return of students from the fall break that ends this weekend, especially in high schools and universities.

Prime Minister Jean Castex will meet with party and union leaders ahead of another crisis meeting with Mr Macron tomorrow.

“I would rather have local bans than a nationwide block for Christmas,” said Damien Abad, head of parliament for the right-wing Republican opposition party, on France Info Radio.

France recorded a record 52,010 coronavirus infections in 24 hours on Sunday.

The number of patients in intensive care units is 2,761, nearly half the country’s total capacity of 5,800, and some hospitals have been forced to move patients to less crowded facilities.

“The outbreak has gotten out of hand,” said infectious disease specialist Gilles Pialoux from Tenon Hospital in Paris on BFM television.

He called on the government to “take drastic action, calling it a lockdown” across the country, despite the economic toll.

“The economy can recover, but you won’t recover if intensive care is down,” he said.

Thousands of protesters angry at new restrictions announced to control the spread of Covid-19 in Italy have clashed with police as European governments tightened their responses to the pandemic. 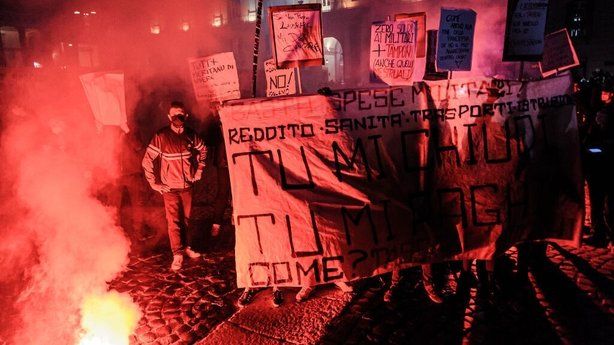 The scenes of the riot came after Italian Prime Minister Giuseppe Conte ordered restaurants and bars to close from 6 p.m. while theaters, cinemas and gyms had to close for a month, much to the annoyance of business owners, opposition politicians and even some academics.

The violence in Italy, which imposed one of the toughest lockdowns in the first wave of infections in March and April, is likely to have repercussions across Europe, where governments are weighing the need for tougher measures against the fatigue and frustration of many.

“There is no question that the European region is currently an epicenter for disease,” said Michael Ryan, chief of the World Health Organization for emergencies.

Maria Van Kerkhove, WHO technical expert on the pandemic, also expressed concern about the situation in Europe and in particular about the increase in hospital stays and the rapid occupation of intensive care units.

“In many cities, beds fill up too quickly and there are many predictions that ICU beds will reach capacity in the coming days and weeks,” she said.

The Czech Republic announced it would be imposing a night curfew, similar to the measures already in place in France and Spain. Slovenia imposed border closings while Norway, with one of the lowest infection rates in Europe, tightened its rules on social gatherings.

Federal minister warns of 20,000 new virus cases per day within a few days

The number of new coronavirus infections in Germany is expected to reach 20,000 a day by the end of the week, said Minister of Economic Affairs Peter Altmaier as authorities prepared new curbs to break the second wave of the pandemic.

“We are dealing with exponential growth,” said Altmaier at a German-French economic conference in Berlin. “In Germany the number of new infections increases by 70-75% compared to the previous week.”

The number of confirmed coronavirus cases rose by 11,409 today. Compared to 6,868 cases last Tuesday and the record of 14,714 reported on Saturday.

Finance Minister Olaf Scholz said the increase in new infections is “very worrying” and that the authorities must quickly take decisive steps to stop the second wave.

Chancellor Angela Merkel and the heads of state and government of the 16 German federal states will hold talks tomorrow to decide on additional measures.

Bild-Zeitung reported that Ms. Merkel was planning a “lockdown light” that would mainly focus on closing bars and restaurants and restricting public events.

The federal government assumes that Europe’s largest economy will shrink by 5.5% this year, a source told Reuters yesterday. This is a slightly more optimistic forecast than their previous projections for a 5.8% decline in gross domestic product.

Senators in the Netherlands today passed a new law to ease the country’s fight against rising coronavirus infections and to open the door to make wearing face masks mandatory.

They voted overwhelmingly in favor of temporary legislation that would give parliament more scrutiny in the fight against Covid-19, which has so far been done through emergency ordinances from Prime Minister Mark Rutte’s government.

The Dutch cabinet ministers met in The Hague today to discuss the growing coronavirus crisis.

The new law provides a legal basis for the enforcement of the wearing of face masks. The ministers said they wanted to do this as soon as possible.

Covering with a face mask has not previously been mandatory in the Netherlands, except in public transport and in public indoor spaces such as city buildings, schools and hospitals.

The law, which was first discussed in early summer, is due to come into force on December 1st.

The Netherlands was partially locked up two weeks ago when the country was hit by a second wave of the pandemic.

This included closing all pubs, restaurants and cannabis cafes for at least four weeks and banning alcohol sales after 8 p.m.

The country has reported a total of 311,889 cases of coronavirus infections, with 7,142 deaths.

These were the details of the news Sweden tightens local measures as virus cases rise for this day. We hope that we have succeeded by giving you the full details and information. To follow all our news, you can subscribe to the alerts system or to one of our different systems to provide you with all that is new.

PREV The looks of art stars at Red Carpet El Gouna Film...
NEXT The first comment from the Tunisian Renaissance Movement on the appointment...