For critics of US President Donald Trump, escalating tensions between two longtime allies of the United States, Egypt and Ethiopia, over a huge dam on a tributary of the Nile, represent the biggest diplomatic failure of his administration in Africa.

Trump said last week that Egypt might “explode” the dam built by Ethiopia, despite his bragging in January that he deserved the Nobel Peace Prize because he “concluded an agreement.”

“I prevented a major war, but rather two wars,” he said shortly after the Ethiopian Prime Minister Abiy Ahmed was awarded the prize.

Trump’s comments were vague, but appeared to be an indication of his intervention, at the request of Egyptian President Abdel Fattah El-Sisi, who once described him as his “favorite dictator”, to resolve the dispute over the Grand Ethiopian Renaissance Dam (GERD).

Egypt sees the dam as an “existential threat” to its survival, a concern that Sudan shares, albeit to a lesser extent. On the other hand, Ethiopia considers the dam vital to its energy needs.

Trump is hated by Ethiopians

The security analyst specializing in the Horn of Africa region, residing in Kenya, Rashid Abdi, said that the US mediation on the dam had exacerbated tensions between Egypt and Ethiopia.

Abdi added, “Ethiopia is enhancing security around the dam.”

He added, “Its defensive measures include declaring the Bani Shengul-Gumuz area, where the dam is located, a restricted airspace, and there are also reports that Ethiopia has placed anti-aircraft batteries around the dam, and it may fear reconnaissance flights by Egypt.”

“He has a misconception that you can strike a deal just like in a business, so he left the US Treasury to play the leading role in negotiations when the State Department was supposed to manage foreign policy, and the consequences were to exacerbate an already bad situation,” he said .

Washington accused Ethiopia of negotiating in bad faith after its decision to proceed with filling the dam before addressing Egypt’s and Sudan’s concerns about the flow of water to their countries.

The United States decided to cut $ 100 million in aid to Ethiopia, the second most populous country in Africa and a key ally of the United States in the war against Islamist militants in the troubled Horn of Africa.

Abdi said, “Ethiopia feels that America has betrayed it, and Trump is now a hated figure for many Ethiopians,” adding that they hope Joe Biden will win the presidential elections on 3 November.

W. Geode Moore, a senior policy researcher at the US-based Center for Global Development, said the Trump administration’s decision to stand by Egypt was not surprising because its most valuable international goal was to bring Israel closer to the Arab League’s member states.

Change levels of the Nile River in northwestern Ethiopia 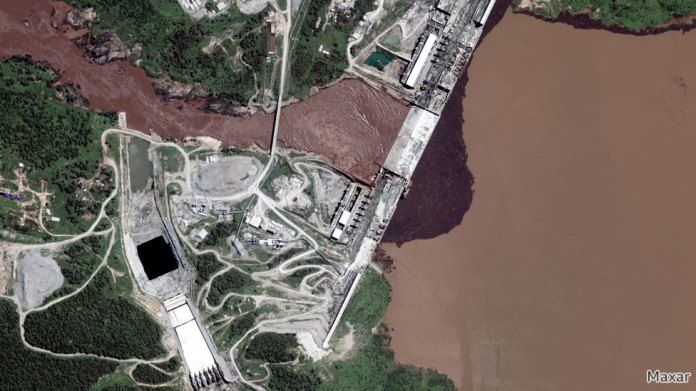 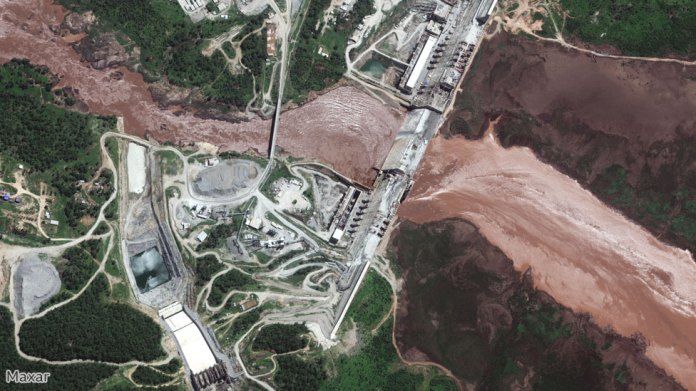 Moore said that given Egypt has long-standing diplomatic relations with Israel, the Trump administration will not provoke it at a time when it needs Sisi’s help to pressure other Arab countries to recognize Israel.

He added, “Thus, the administration became a party to the dispute over the dam alongside Egypt.”

The focus of the administration of US President Donald Trump on achieving Arab-Israeli rapprochement also shaped its policy towards Sudan, which gave Trump a major diplomatic coup by agreeing less than two weeks before the US elections, to normalize relations with Israel.

Although the Acting Foreign Minister of Sudan later said that the decision is subject to ratification by a legislative body that has not yet been formed, the declaration was of special importance as Sudan hosted a famous meeting of the Arab League in 1967 in which he declared that “there is no peace with Israel.” There is no recognition of Israel, and no negotiations with it. “

In return, Trump, if he wins a second term, is expected to continue to pressure Ethiopia to address Egypt’s and Sudan’s concerns about the dam, while ensuring that Sudan is removed from the US list of “sponsors of terrorism”, thus opening the way for the country to obtain much-needed economic assistance.

Moore said that while the Trump administration deserves praise if the US Congress removed Sudan from the terrorism list, its decision to link that to recognition of Israel was too risky for Prime Minister Abdullah Hamdok’s government, which took office last year after the overthrow of Omar al-Bashir’s regime.

“The issue of relations with Israel has deeply divided Sudanese society, and it could be a destabilizing factor at a time when the government is already facing its own security challenges, and the peace is fragile,” Moore added.

For Abdi, an additional concern about the effects of Trump’s policies on Africa has been the “new cold war” between the United States and China.

An example is the fact that China has set up its first foreign military base in Djibouti, near the US base used in air strikes against militant Islamists in Somalia, and is the focal point of counterterrorism operations in Africa and Yemen. Abdi said, “American combat aircraft were coming for landing recently, and the Chinese launched experimental laser weapons that temporarily blinded the American pilots. This is what you expect in the James Bond movie.”

Abdi added, “In the Trump era, the United States pursued an aggressive anti-China policy while China became an increasingly assertive force, creating a dangerous situation in the Horn of Africa.”

As part of its efforts to counter Chinas growing economic influence on the continent, the Trump administration unveiled the African Prosperity Program in 2018 as a cornerstone of its policy toward the continent.

“They want to double the volume of trade between the United States and Africa in both directions,” Moore said. “So it’s a very prominent goal and it could be of great benefit to Africa, more than any other administration has done, but they’re still trying among themselves to figure out how things will go.”

Moore added that US investments in Africa were previously in the oil and gas sector, but this declined sharply due to the growth of the hydraulic fracturing process (to produce what is known as shale oil) in America.

The Trump administration created the state-funded Development Finance Corporation in 2019 to help American companies gain a foothold in Africa.

“They want to provide funding to American companies that have been complaining about their inability to compete because Chinese companies are coming in with financing, and if you just look at the IT sector, nearly 70 percent of the IT backbone in Africa is built on Chinese components,” Moore said. .

Undermining the efforts of the African Union

The Trump administration also decided to abolish the Africa Growth and Opportunity Act (AGOA) when it expires in 2025. The law represented the distinctive African policy of US Democratic President Bill Clinton, which gives African countries preferential access to the US market.

Moore said the administration’s focus has been on bilateral trade deals, and it is already in talks with Kenya, the economic powerhouse in East Africa that is part of Chinas Belt and Road Initiative that the United States believes aims to build a series of trade routes that will connect the Asian giant with Africa, boosting it. Chinas global dominance.

“The Trump administration wants to conclude an agreement with Kenya, which will then be used as a model for a large number of agreements with other African countries,” Moore said. “Kenya agreed to this because it used AGO to its advantage, and it does not want to lose trade with the United States,” Moore added.

This came despite the fact that the Commissioner for Trade and Industry of the African Union Albert Mushanga had expressed his preference for negotiating with “one voice” “an agreement between the whole of Africa and the United States.”

Moore said the US decision could undermine efforts by the African Union to integrate the economies of African countries with the goal of turning the continent into the largest free trade area in the world.

“This step is an extension of the Trump administration’s policy of not working within the framework of multilateral framework agreements,” Moore said.

Moore said that Kenya’s decision to enter into bilateral talks was also not surprising, adding: “The United States is keeping the cards here because it is the market that African countries want to access, regardless of who is in power (after the November 3 elections), and will pay Kenya from Postponed a bilateral agreement unless its current access to the US market is guaranteed. “

He added that Biden, who served as vice president under former President Barack Obama, has not yet declared his Africa policy if he wins.

“The Biden administration may go back to what existed in the Obama era, but compared to China, whose Secretary of State has been visiting Africa annually since 2000, there are few high-level exchanges between the United States and Africa,” Moore said.

“The Trump administration is not new to giving Africa a low priority. It was worse,” Moore said.

These were the details of the news The Renaissance Dam: Why do Ethiopians feel that Trump has “betrayed”... for this day. We hope that we have succeeded by giving you the full details and information. To follow all our news, you can subscribe to the alerts system or to one of our different systems to provide you with all that is new.