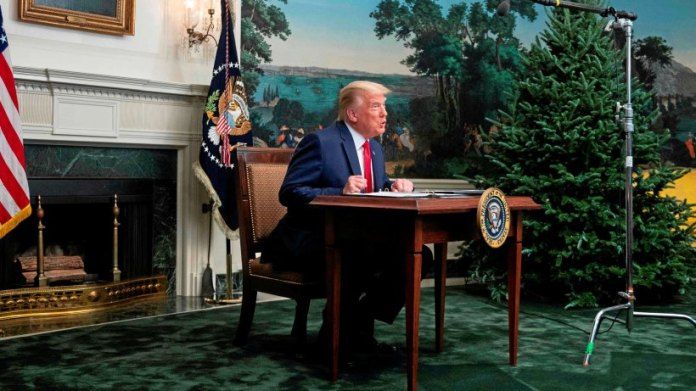 America laughs at photo of Trump at mini desk

Washington.
A photo of US President Donald Trump at a desk in the White House that is much too small caused a lot of amusement on social networks. Numerous Twitter users posted the photo under the hashtag on Friday
#tinydesk
(Eng. “mini desk”) and
#DiaperDon
(“Diaper-Don”), provided with mocking comments.

Some users wrote that the picture symbolized the shrunken political size and childish behavior of Trump. Others asked if the picture was photosopped. Most of them just enjoyed themselves, however. Many users took the original image and changed it.

A selection of the funniest tweets:

The scene with Trump at his desk was shot at one
Video switch
on Thursday evening (local time) with foreign US soldiers on the occasion of the Thanksgiving holiday. It was the first time since the November 3 election that the incumbent US president asked questions from reporters.

Donald Trump – More on the US President

At the meeting, Trump said he would vacate his office for the first time, subject to the electoral college appointing Democrat Joe Biden as the new president in mid-December. At the same time, Trump repeated his unproven claim that he was around the
Cheated election victory
turn into.

The activist group “MeidasTouch”, which is close to the US Democrats, went even further and posted a photo on Twitter that shows Trump unfavorably from the side – with the hashtag #DiaperDon. The hashtag was one of the on Friday
most used search terms
on Twitter. in the USA.

Donald Trump himself reacted angrily on Friday night. Under his Twitter account, the US President complained that Twitter was deliberately promoting false “trends” that had nothing to do with what was really of interest in the world. Twitter will happen the same as
Fox News
. “Also, a great conservative discrimination”.

Trump last fell out with Fox News after being
former favorite station
and mouthpiece in the US presidential election early on had chosen his challenger Joe Biden as the winner in individual states.

US election 2020 – everything about the duel Trump vs. Biden

In another tweet, Trump again demanded that “Section 230” must be abolished for reasons of “national security”. Trump has been shooting against the ”
Section 230
“- this is a legal regulation from the 1990s. It protects online platforms from persecution for content that their users upload – and at the same time gives them extensive leeway to take action against individual contributions.

These were the details of the news Donald Trump: Photo on the mini desk causes laughter for this day. We hope that we have succeeded by giving you the full details and information. To follow all our news, you can subscribe to the alerts system or to one of our different systems to provide you with all that is new.

PREV US shipping 2.58 million more Covid-19 vaccine doses to Philippines
NEXT Signing a partnership between Mubadala and International Trade worth 10 billion...