Donald Trump was humiliated by a photo of him on a small desk inside the White House, which went viral after being tweeted by a reporter working for his nemesis, CNN.

The photo was taken by Kaitlan Collins, White House correspondent for the network and longtime partner of the Trump team, who was on duty at Thanksgiving when Trump telephoned the troops.

The President spoke from a small table pictured inside the Diplomatic Reception Hall – a room on the ground floor that leads to the South Lawn.

It was the president’s first Thanksgiving at the White House: in 2017 and 2018 he was in Mar-a-Lago, and last year he took a trip to Afghanistan to celebrate with the troops. 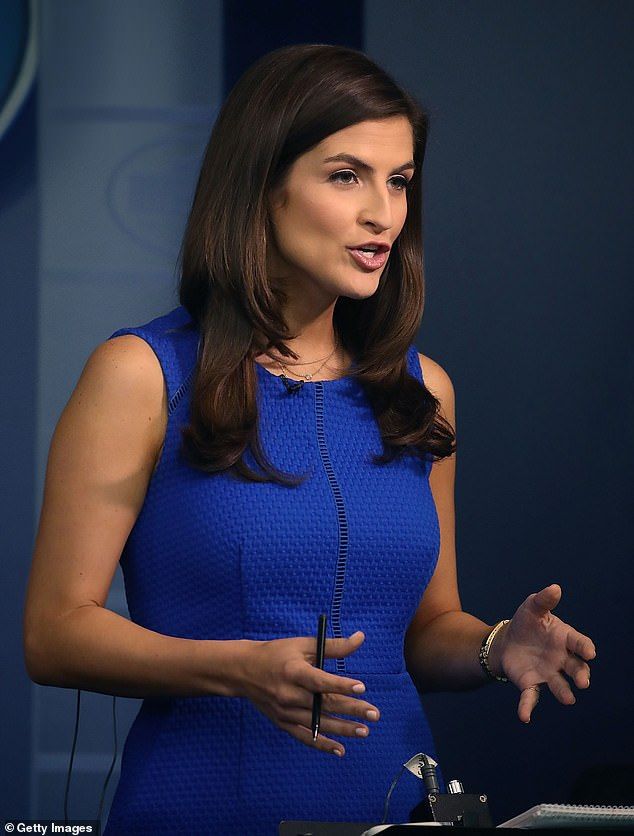 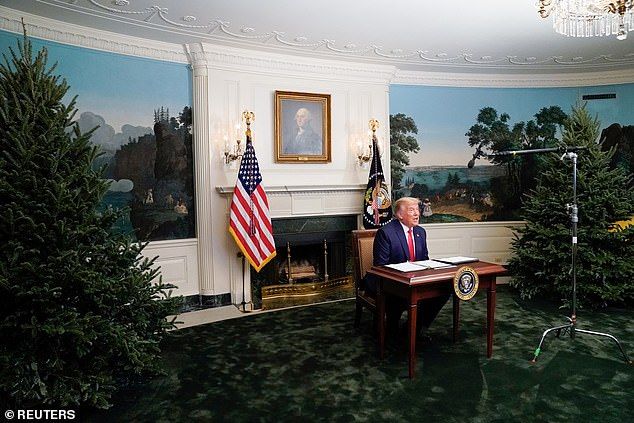 Collins’ photo wasn’t the only take from the small office, but hers had the most impact 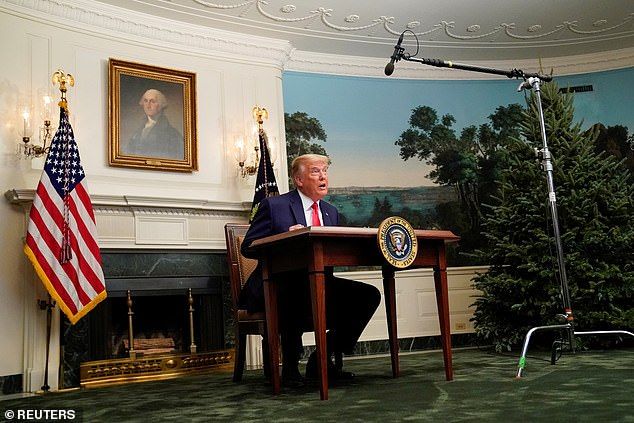 Collins’ photo wasn’t the only shot of Trump at the table – a Getty photographer also captured the moment, as did Reuters correspondent Jeff Mason, who posted the images to Twitter.

But it was Collins’ image that went viral, with 2,300 likes.

President Trump hosts a video teleconference with members of the military from around the world. He’s calling from the diplomatic reception hall, ”she captioned her photo.

Some noted that he was sitting next to an undecorated Christmas tree – mockingly suggesting that the First Lady had decided not to decorate this year.

In July 2018, Melania was recorded in a phone conversation complaining about having to decorate the White House, saying, “Who’s *** about Christmas? “

Others, however, were amused by the sight of the president at what they called “the children’s table.”

“He’s at the children’s table,” said one of them.

“Awww, he looks so cute at this little desk,” another laughed.

Another commented, “When I first saw this I thought it was a political caricature of him being at a children’s table and then I realized it was real. “

Memes of the president with colored pencils at the small table began to circulate and spoofed images of him playing with children’s toys.

“Looks like he’s using a grade 4 desk and borrowed the Presidential Seal from his golf cart!” said a man.

The fact that the mockery came from Collins’ tweet probably angered the president even more. 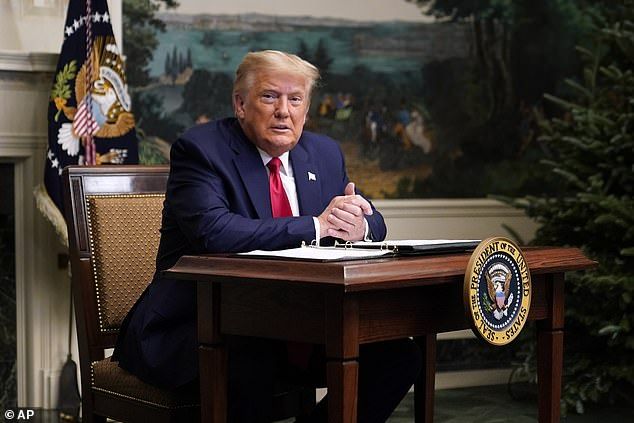 Trump’s desk, placed between two bare Christmas trees, has been the source of much mockery

Collins was in a fight with the president again on Thursday after the Thanksgiving call.

In his first response to questions from reporters, Trump’s fierce accusations of fraud were met with interruptions from Collins and other reporters – which led the president to yell at Reuters’ Jeff Mason that he lacked respect.

When Collins tried to ask a question, he closed it.

“Listen, excuse me. Excuse me, he said.

“If I can,” Collins replied.

“When they don’t allow a poll observer, who is a sacred person in our country. People don’t know what a poll watcher is, ”he continued.

“A poll observer is – it’s considered sacred in our country. When they throw them out of the rooms –

Collins interrupted him saying, “But that’s not true. They did not do it.

“Your attorneys admitted they were in the room,” Collins said.

Trump replied, “Excuse me. No, they didn’t. My lawyers didn’t admit anything. And these are all different places. 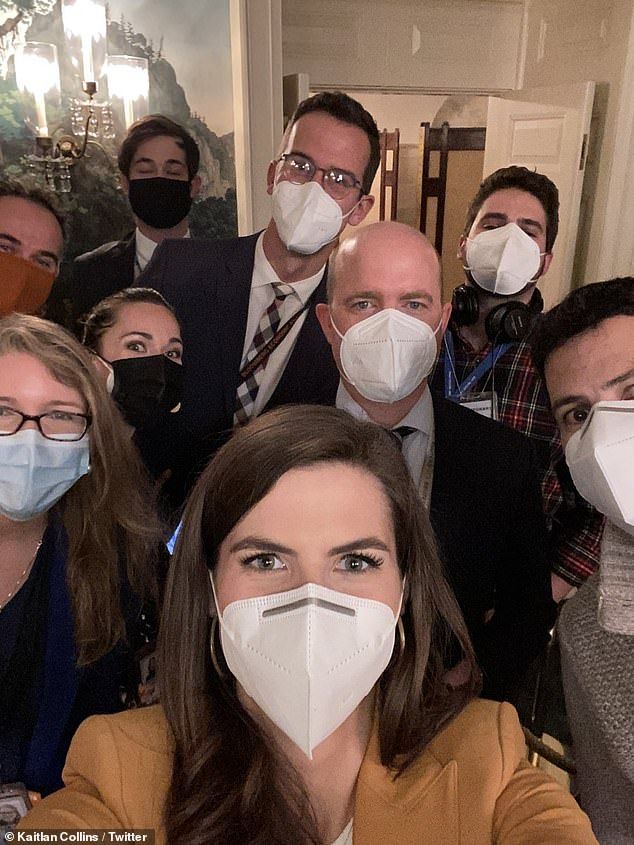 Collins captioned the photo: “The crew that got President Trump to answer his first questions in over three weeks.” Proud to be part of it. Happy Thanksgiving! ‘

Collins then took a selfie with the rest of the White House reporting team, gloating that he was finally asked about the election and his attempts to quash the appeal to Biden.

The 28-year-old reporter from Alabama started working at the White House in January 2017 – at the same time as Trump.

She was first employed by The Daily Caller before moving to CNN, becoming one of their youngest White House correspondents.

Collins has long upset the White House with his tough questions.

In her freshman year, she was temporarily banned from the Oval Office for asking questions of the president whom her press team deemed rude.

Collins asked about Vladimir Putin and former Trump attorney Michael Cohen and said senior White House officials told him the questions were “inappropriate for this place.”

Press secretary Sarah Sanders said Collins “shouted questions and refused to leave,” while Kellyanne Conway said Collins was banned for not being “polite.”

The White House Correspondents Association opposed her ban and she was reinstated. 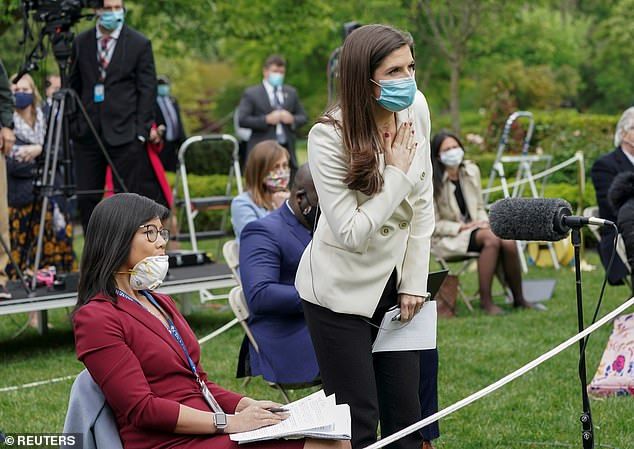 Collins has worked at the White House since 2017, first with the Daily Caller and then CNN

Collins also clashed with the president this year over his refusal to order the wearing of face masks during the pandemic.

He spotted a clip of her momentarily removing her face mask and tweeted it with the caption, “A fake CNN! “

She replied: “Nearly 90,000 Americans have been killed by coronavirus, and the president tweeted that I took my mask down for six seconds on Friday. “

With Collins begging to answer a question, McEnany replied, “I don’t call activists,” then left the lectern.

“I’m not an activist and you haven’t answered the questions since October 1 and you just took about five, Kayleigh,” Collins replied, as McEnany walked out of the room.

“It doesn’t do your job, your taxpayer funded job,” she added.

These were the details of the news CNN reporter repeatedly berated by Trump took humiliating photo of president... for this day. We hope that we have succeeded by giving you the full details and information. To follow all our news, you can subscribe to the alerts system or to one of our different systems to provide you with all that is new.

PREV After the arrest of the last two Palestinian prisoners who escaped...
NEXT Lebanon… a diesel tanker “saves” the confidence session in Mikati’s government