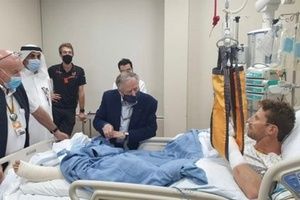 The driver Romain Grosjean is doing well and remains conscious after a strong crash in which his car went up in flames and was split in two at the Formula 1 Bahrain GP. According to information from the Bahrain Military Hospital, where the driver went sent after the crash on the first lap of the GP, the initial suspected rib fracture has not been confirmed and the Frenchman is out of danger.

“He’s out of danger. His lungs are being monitored, but the situation is under control. Burns on his hands are the main injuries. There are no fractures. He’s fully conscious.” According to his team, Haas, the pilot will remain in the hospital to treat the burns.

Grosjean even recorded a video of the hospital, with both hands bandaged, and acknowledged that his life was saved by a security device that he himself criticized in the past. “Hi guys, I just wanted to say that I’m fine, I mean, more or less well [mostrando os dedos]. Thank you very much for all the messages. I didn’t support the halo in a few years, but I think it was the best thing we implemented in F1. Without it, I couldn’t speak to you today. I thank all the doctors on the circuit and at the hospital and I hope that soon I can write some messages for you and tell you how things are going. “

The team also reported that the impact of the accident was 221km / h. The crash happened right on the opening lap, when Grosjean threw the car to the right and apparently did not see that Daniil Kvyat was on his side. The impact of the crash with the Russian threw him directly against the guard rail and the violence of the impact caused the protective barrier to split in half and also split the car in two, exposing the fuel tank and causing a huge explosion.

Grosjean’s car was broken in half after the crash

Grosjean was directed to the medical center and could walk, but with difficulties

Commissioners put out fire after Romain Grosjean accident in Bahrain

Grosjean managed to get out of the car still on fire, having been saved by the halo, protection is just above the pilot’s head and that prevented the shock with the guard rail from going directly against his helmet. F1 doctor Ian Roberts arrived on the scene in a few seconds and helped the driver to jump over the guard rail and escape the flames.

The race was stopped for over an hour for the barrier to be repaired. And the race ended up being won by Lewis Hamilton.

There are two races to go before the end of the season, already in the coming weekends, so this accident probably means the end of Grosjean’s F1 career, since Haas has already announced that he will not renew his contract. In the past few days, he has been stressing how he wants to return to winning victories in other categories, after bittering the bottom of the pack in recent years with Haas. One of the reserve drivers of the American team is the Brazilian Pietro Fittipaldi, who accompanies the team every weekend and has tested the car on the track on some occasions, but no announcement has been made so far.

*The article has been translated based on the content of Source link by https://www.uol.com.br/esporte/colunas/pole-position/2020/11/29/grosjean-tem-queimaduras-nas-maos-e-esta-fora-de-perigo-apos-acidente.htm
. If there is any problem regarding the content, copyright, please leave a report below the article. We will try to process as quickly as possible to protect the rights of the author. Thank you very much!

These were the details of the news Grosjean has burns on his hands and is out of danger... for this day. We hope that we have succeeded by giving you the full details and information. To follow all our news, you can subscribe to the alerts system or to one of our different systems to provide you with all that is new.

PREV Ahmed Schubert: Hossam Al-Badri was subjected to injustice .. and the...
NEXT Electricity: The card counters are fully secured and it is difficult...