A moving Mike Pence gave a farewell speech upon his return to his hometown of Indiana on Wednesday after breaking up once again with Donald Trump to attend President Biden’s inauguration.

His voice cracking as he thanked his family for their support, Pence told a small crowd of supporters in Columbus that he would “always be grateful” to Trump but also publicly congratulated Biden by name – this that Trump never did.

Pence, whose refusal to reject the results of the congressional election ruined his close alliance with Trump and was part of the chain of events that led to the January 6 violence on Capitol Hill, did not attend the departure ceremony from Trump on Wednesday.

Instead, with Trump boycotting the inauguration, Pence played the more traditional role of applauding the new president and saluting his successor as vice president, Kamala Harris. 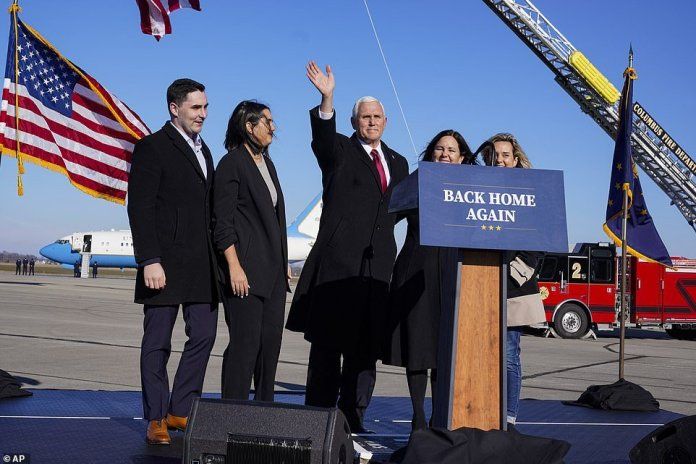 Farewell: Pence spoke to supporters and said he was ‘proud’ to have worked on the Trump administration’s pandemic response, but also offered his congratulations to President Biden 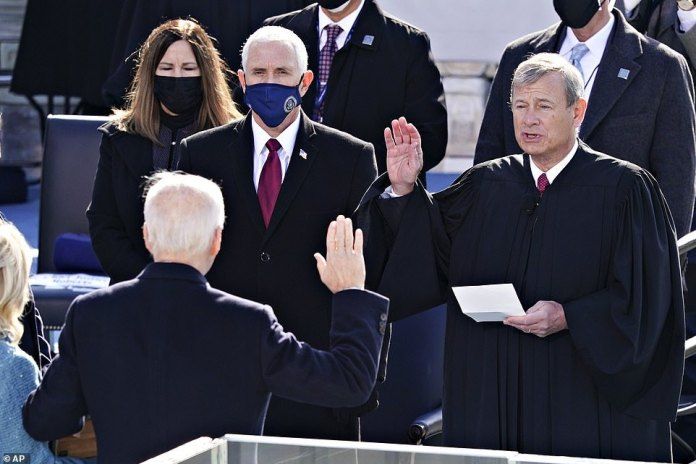 Transfer of power: Pence, at the back, watches Biden recite the oath with Chief Justice John Roberts on the steps of the Capitol on Wednesday, after Trump boycotted the inauguration 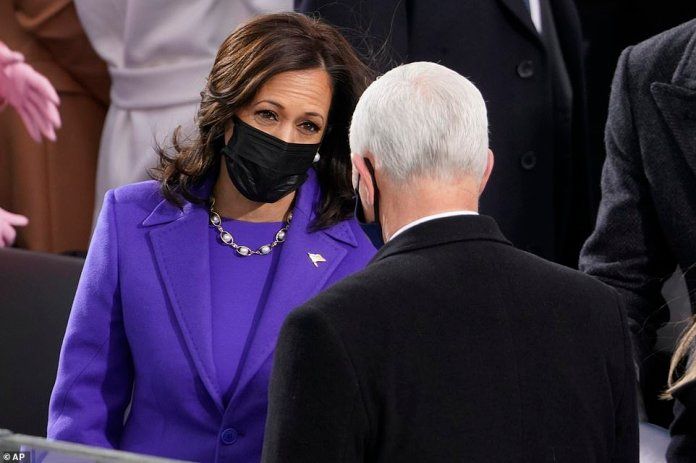 Moment of unity: Mike Pence and Kamala Harris spoke on the Capitol platform – which Trump refused to do with Biden

Harris and her husband Doug Emhoff escorted Pence and his wife Karen out of the Capitol after Biden’s inauguration, a gesture typically performed by incoming and outgoing presidents.

Pence then flew to Columbus, Indiana on a government plane, addressing a small audience as he was flanked by the former second lady and her daughters Charlotte and Aubrey at a municipal airport.

Speaking from a lectern saying “Back home,” Pence did not respond to speculations he would run for president in 2024, but said he would return to live in Indiana now that his tenure. is finished.

The former congressman and governor praised Trump for his economic policies and the appointment of conservative judges, adding that he was “proud” of the administration’s response to the coronavirus pandemic.

“I will always be proud to have served in an administration that joined with doctors, nurses and first responders and organized a whole-of-government response at the federal, state and local levels to respond to this moment,” said Pence. 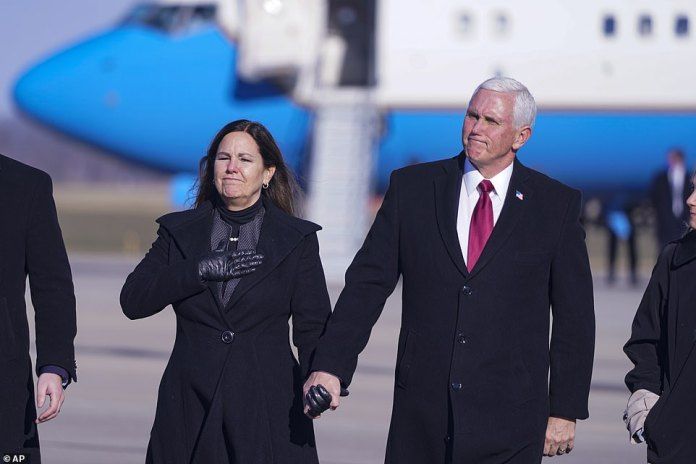 Return: Pence plans to live in the state where he was previously governor – but after returning with his wife Karen (pictured) he did not respond to speculation about a run in 2024 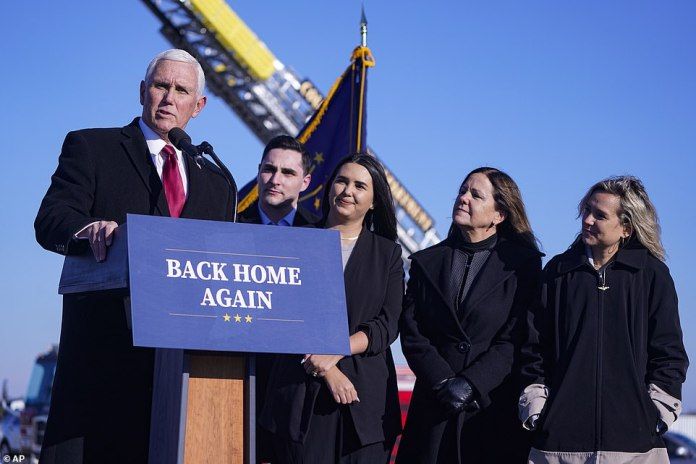 “Being your Vice President has been the greatest honor of my life. But now that this season of service is over, we just had to go home, ”Pence said.

“Upon returning home, thank you for giving us the privilege of serving the United States of America as Vice President.

“Today we inaugurated a new president and a new vice president, and allow me to extend my congratulations to President Joe Biden and Vice President Kamala Harris.

But let me also take a moment to thank President Donald Trump and Melania for all they have done to make America great again.

“We will always be grateful for the opportunity they have given us to serve, for how they have allowed us to make a difference in the life of this nation.

Pence did not address the riot on Capitol Hill two weeks ago that tore his relationship with Trump apart and marked the administration’s legacy forever.

After four years as a loyal lieutenant, Pence came under Trump’s crosshairs after announcing he would not use his role as Senate speaker to reject Biden’s electoral victory in Congress.

Failed to persuade state courts or lawmakers to defy the will of voters, Trump had turned desperately to Pence – mistakenly claiming the VP had the power to reject electoral votes when certifying the 6 January by Congress.

“If Mike Pence does the right thing, we win the election,” Trump mistakenly told his supporters shortly before they rampaged down the halls of Capitol Hill. 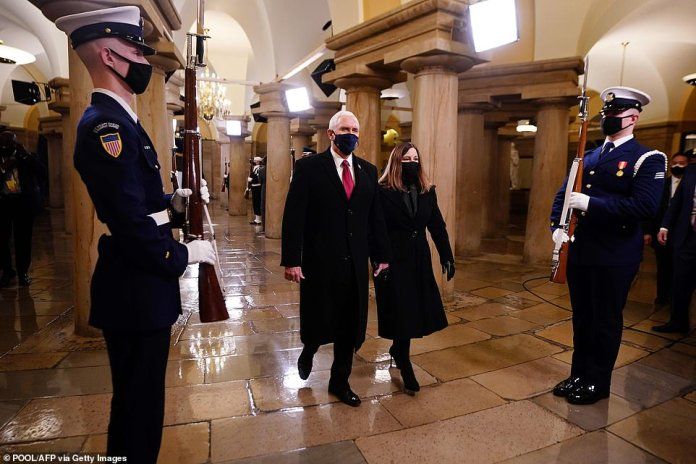 Pence, in his final moments as vice president, crosses the Capitol with his wife Karen as they arrive at the opening on Wednesday 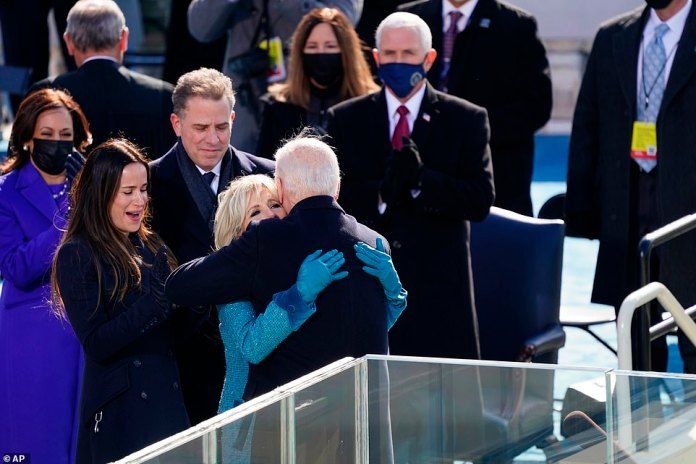 As Trump boycotted the ceremony, Pence applauded when Biden embraced his family after taking the oath of office as the 46th U.S. president. 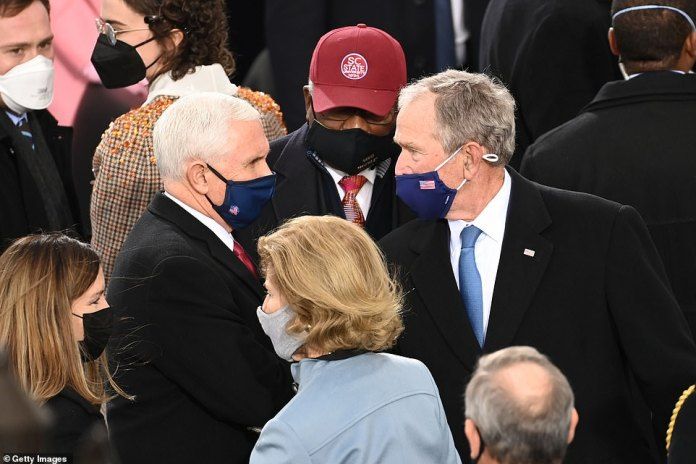 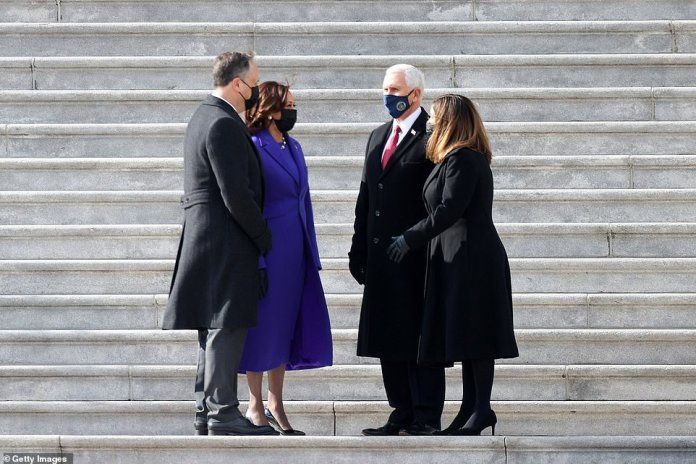 The Pence continued the tradition by descending the Capitol steps with their successors, second Mr. Doug Emhoff (left) and Vice President Kamala Harris

Some of the rioters were so enraged at Pence’s refusal to comply that they threatened to hang him for not remaining loyal to Trump.

After the hours-long assault that left America’s place as a beacon of democracy in tatters, Pence finally dropped the hammer on the 2020 election and certified Biden’s victory.

Pence’s allies were outraged at how Trump had made his stalwart MP a scapegoat for his defeat.

The public split even led to demands that Pence use the 25th Amendment to remove Trump from office in the final days, but the vice president rejected the Democratic offer.

House Speaker Nancy Pelosi told CBS that Pence refused to come on the phone when she and his Senate counterpart Chuck Schumer called him to urge him to initiate 25th Amendment proceedings.

Days later, Trump and Pence had a “good chat” in the Oval Office in an effort to relax, and Trump thanked Pence by name in his farewell address in Washington.

But Pence chose not to be part of Trump’s dispatch, instead watching the steps of the Capitol as Biden and Harris were sworn in at noon on Wednesday.

Pence, 61, was pictured speaking to his successor and other guests, including George W. Bush, before returning to Indiana after the ceremonies ended.

On Tuesday evening, Pence sent out a farewell tweet, including four photos of his tenure – none including Trump.

The dramatic end of his term as vice president has called into question whether Pence could run for president in 2024, as his credentials as a Trump loyalist are badly damaged.

Neither Trump nor Pence have said in public whether they intend to run in 2024, although Trump said in cryptic form on Wednesday that “we’ll be back in one form or another.”

Trump still has a historic second impeachment trial looming against him, which could theoretically lead to his disqualification from future office, even if it would require significant Republican support.

The betting markets have Pence as one of the GOP’s most likely prospects, along with former UN Ambassador Nikki Haley and Texas Senator Ted Cruz. 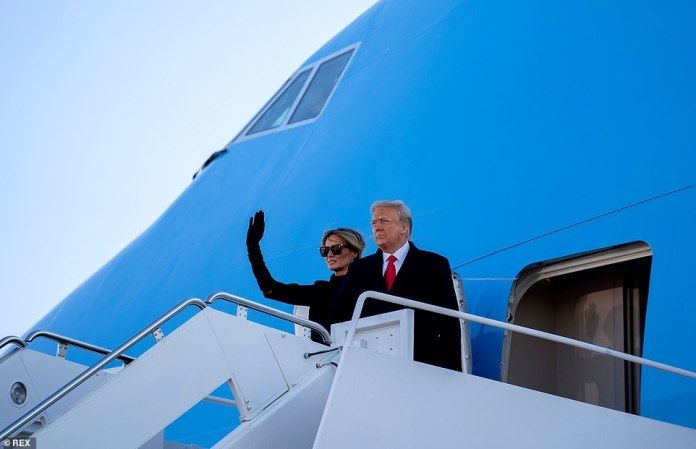 Donald and Melania Trump left Washington, DC on Wednesday morning and landed in Palm Beach around the same time Biden’s dedication ceremony began. Pence was not present during remarks where Trump thanked his No.2 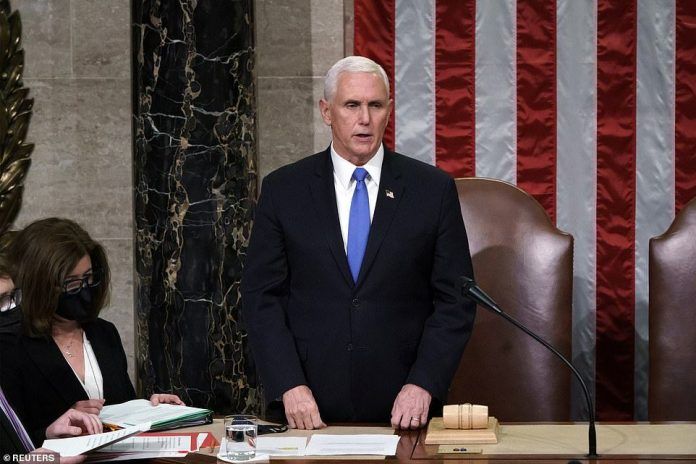 Pence presides over the Jan. 6 joint session of Congress in which his refusal to reverse Trump’s electoral defeat ended any hope that Trump would remain in power by constitutional means – leading his supporters to attempt a violent insurgency at the square.

These were the details of the news Mike Pence’s emotional voice cracks as he gives a farewell speech for this day. We hope that we have succeeded by giving you the full details and information. To follow all our news, you can subscribe to the alerts system or to one of our different systems to provide you with all that is new.