Hind Al Soulia - Riyadh - The meeting point is a secluded spot where Chris sits on a bench overlooking the water, away from the busy hubbub of central Hong Kong. The quiet setting and sea breeze are a welcome reprieve from a city that has suffered ongoing chaos since last June, when mass protests erupted.

The catalyst was the proposed 2019 Hong Kong Extradition Bill, which would have allowed suspected criminals to be sent to mainland China for trial, which critics argued would give the Chinese government greater control over Hong Kong and could be used to target activists and journalists.

Chris is a civil servant in his late 20s who works in one of Hong Kong’s police stations. His situation gives him a unique insight into what goes on behind the heavily guarded constabulary walls, where the city’s police force is battling fierce criticism for its aggressive policing of the pro-democracy movement.

The specifics of Chris’s role cannot be revealed for fear of exposing his identify, which is why he is using a pseudonym. He has purposely chosen this out-of-the-way location to ensure maximum privacy – if caught talking to The National, he would not only lose his job, but also face arrest for admitting to taking part in the protests. 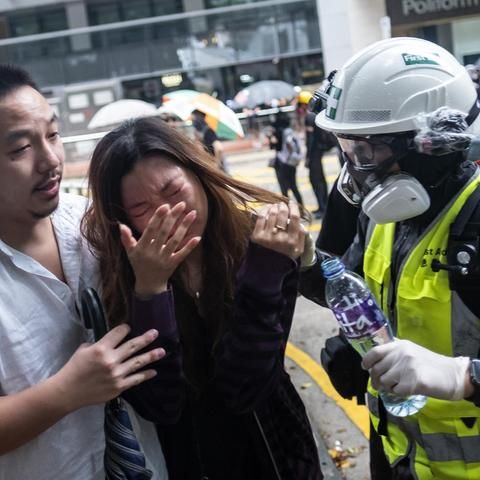 “Everyone deserves to know the truth and I observe things the general public doesn’t. I love Hong Kong and if the city’s values are lost then I and many other people will lose everything,” he says, as he proudly offers us Chinese dumplings, fish balls and steamed vermicelli rolls to try.

“I want the international community to know the situation here so it can put pressure on Beijing to release its tyrannical grip on Hong Kong.”

It attributes the escalating violence from both police and protesters to the “heavy-handed police response” and accuses the force of “laying siege to the Hong Kong Polytechnic University campus” in November, deploying teargas and water cannons to prevent protesters, volunteer medics, social workers, journalists and other observers from leaving the scene.

The 7,019 arrests made until January 16 are “extraordinarily high”, according to the report, which states that at least 40 per cent were students and more than 13 per cent aged under 18. Amnesty International is now urging the Hong Kong government to establish a special commission of inquiry into police conduct during the Extradition Bill protests.

Chris underwent a year-long application process to secure his job – the norm for a fiercely sought-after government position offering a good salary in a society where jobs with this level of stability are hard to come by. It was a big deal when he was offered the position, but now, he says, his job has left him feeling increasingly conflicted.

“These officers, who smile at me and say ‘good morning’, they could have been hurting or humiliating protesters the day before,” says Chris.

“There are good officers but it’s clear the majority of the force hate the protesters – I witness systemic prejudice towards them on a daily basis.

"Some officers believe the protesters are brainwashed kids, others think they receive money. I’ve overheard conversations between officers where they’ve said how nice it would be to beat up protesters and I once saw a handwritten sign stuck on an office wall saying ‘defeat the cockroaches’, meaning the protesters.”

He says incidents like this leave him feeling very frustrated and disappointed. “These officers, who are supposed to protect our society, are in violation of their oath – to serve without malice or ill-will towards anyone.”

June 9 is considered to be the crucial starting point of the pro-democracy movement, when more than one million people took to the streets in response to the proposed extradition law.

Critics argued that the bill – which was officially withdrawn on September 4 – would be used as a way to target political dissidents. Since then, demands have broadened – including a call for an independent investigation into the use of force by police.

What began as peaceful rallies descended into months-long violent clashes with police. The turning point of the movement came on July 21 when triads – known as the Chinese mafia – attacked protesters and bystanders, which led to accusations of police collusion due to a slow response by officers.

The number of participants at the rallies peaked at nearly two million in August. In the last couple of months, the coronavirus has prompted a drop in demonstrations but violence erupted between protesters and police once again at the end of February as frustrations bubbled over.

Chris has been a regular attendee at the demonstrations, along with his parents – a common sight at rallies, where families often turn out together. However, he says he does not participate in the destructive rampages that shatter the windows of shops deemed pro-government and hurl Molotov cocktails at police stations.

In Chris’s opinion, this damage is nothing compared to the brutality inflicted on protesters, members of the press, first aiders and innocent bystanders that police officers stand accused of. He feels particularly disturbed by allegations of sexual violence against members of the police from protesters.

“We always considered the police to be good, respectable people and we were taught whatever happens you call the police and they respond quickly,” he says.

Chris says he no longer feels safe in Hong Kong and finds it an “emotional struggle” knowing he is participating in the running of a government that is inflicting “political suppression”.

“The government is endorsing police violence, making officers fearless of consequences, by continuing to publicly support them verbally, by condemning protesters’ violence but ignoring police officers’ incomparable violence, and by passing unfair injunctions that are protective of police while punishing the public,” he says.

In October, a temporary injunction banning people from publishing police officers’ personal details and photographs online – known as doxxing – was implemented in an attempt to stop harassment of officers and their families. Face masks were also banned from being worn at public assemblies in a bid to deter people from taking part in the protest action.

Asked if he ever feels concerned about being targeted by protesters who might assume he is an officer, Chris replies: “No, the dangerous people are inside the police station. My fear is officers from my station finding out that I support the protests, which would be the end of my career.

“I, along with many others, want justice to prevail. There are still many who still have hope this situation can be changed. We won't stop fighting because this is a battle for our basic human rights, for freedom, for democracy.”

These were the details of the news Hong Kong police vs protesters – an insider’s story for this day. We hope that we have succeeded by giving you the full details and information. To follow all our news, you can subscribe to the alerts system or to one of our different systems to provide you with all that is new.

PREV Al-Akhbar: Investigation from the Information Branch to the Intelligence: Who is...
NEXT Speech and singing for the stars of the Korean band BTS...