Jeddah - Yasmine El Tohamy - NEW YORK: For Jamilah Shakir, the first week of Ramadan has been an adjustment. She typically spends every night of the month at the Atlanta Masjid of Al-Islam or another mosque nearby. Now Ramadan has come, and mosques are closed to worshippers to prevent spread of the coronavirus. So Shakir and her family have had to improvise.
“It feels a little weird,” she says. “Not praying in community has been very, very different.”

For Muslims in the United States, there is no other time more centered around gathering in congregation than the holy month of Ramadan. In every corner of the country, believers attend community iftar meals to break the fast and then pack neatly into tight rows for nightly prayers at the mosque. On weekends, especially, some may linger longer as they catch up, share in the pre-dawn suhoor meal and line up again for the fajr, dawn, prayers.
“The mosque plays a more significant role in being also a community center for American Muslims,” says Feryal Salem, associate professor of Arabic and Islamic studies at American Islamic College. “Because Muslims are a minority, they have to go the extra mile to create that unique communal experience that’s unique to Ramadan.”
But this year, Ramadan falls during a global pandemic. In the U.S., with the world's highest COVID-19 death toll, that means being forced to mark the month in different, more virtual and sometimes solitary ways.
As they re-imagine some of the spiritual and social rituals, many are relying on a mix of at-home worship and a myriad of online religious programming. Virtual iftar options have sprung up so the devout don’t have to break their fast alone. But not all moments can be recreated on a screen. There will be dishes not shared, prayers not performed together, hugs not given.
Hugs and congregational prayers are the two things Shakir misses the most.
But she looks for the blessings. She lives in a close-knit community in South Atlanta with dozens of other Muslim families. She still plans to catch her neighbors — at a distance — on the days she and her sons might be grilling meat for iftar outside.
“Although it’s very different from how we normally gather, I’m still so grateful that Allah put us in this Islamic community during this time.”
Around the country, Muslims are adapting to the unprecedented challenges. From a recent convert observing his first Ramadan to a respiratory therapist balancing her faith with a job on the frontline of the battle, The Associated Press follows a few of their journeys.
Houston: Ricardo Ramirez, 28

Ricardo Ramirez converted to Islam before a crowd of Muslims.
He was told that day that “all of these brothers and sisters are your brothers and sisters.” There were handshakes, pats on the back and hugs. So many hugs.
Since then, he says, the community has been there for him. But Ramirez is experiencing a milestone in his faith journey — his first Ramadan as a Muslim — as the virus disrupts worship and mosques close.
“It’s going to be really difficult,” he said before Ramadan started. “I do have a lot of questions, and there’s a lot I want to observe and ask about.”
It was a conversation about Ramadan that sparked Ramirez’s interest in Islam. In 2017, he noticed a co-worker wouldn’t eat during the day. She told him she was fasting. Something resonated.
“I’ve never seen anybody speak about their religion the way she did,” he says. “Even with everything going on in the world negatively toward Muslims, she was still very excited to tell me.”
Born in Texas to parents of Mexican descent, Ramirez was baptized Catholic. But growing up, he experienced Catholicism as largely confined to culture and celebrations.
His mom was upset when he told her he was considering Islam. “A lot of people seem to have that same conversation with their parents,” he says. Eventually, she came around. While on work trips to Saudi Arabia, she got him a prayer mat, a copy of the Quran, prayer beads and some dates. He has been saving the dates for breaking his fast during Ramadan.
The first day of the Islamic holy month left him feeling “accomplished.” But he also missed being around others observing it. Attending virtual iftars — “being able to share that moment with other people” — has helped.
And in the compulsory solitude, he’s determined to find strength. “The more I think about it, I think this is the path that Allah has set for me as a challenge ... to know that this religion is for me.”
Chicago: Jumana Azam, 33 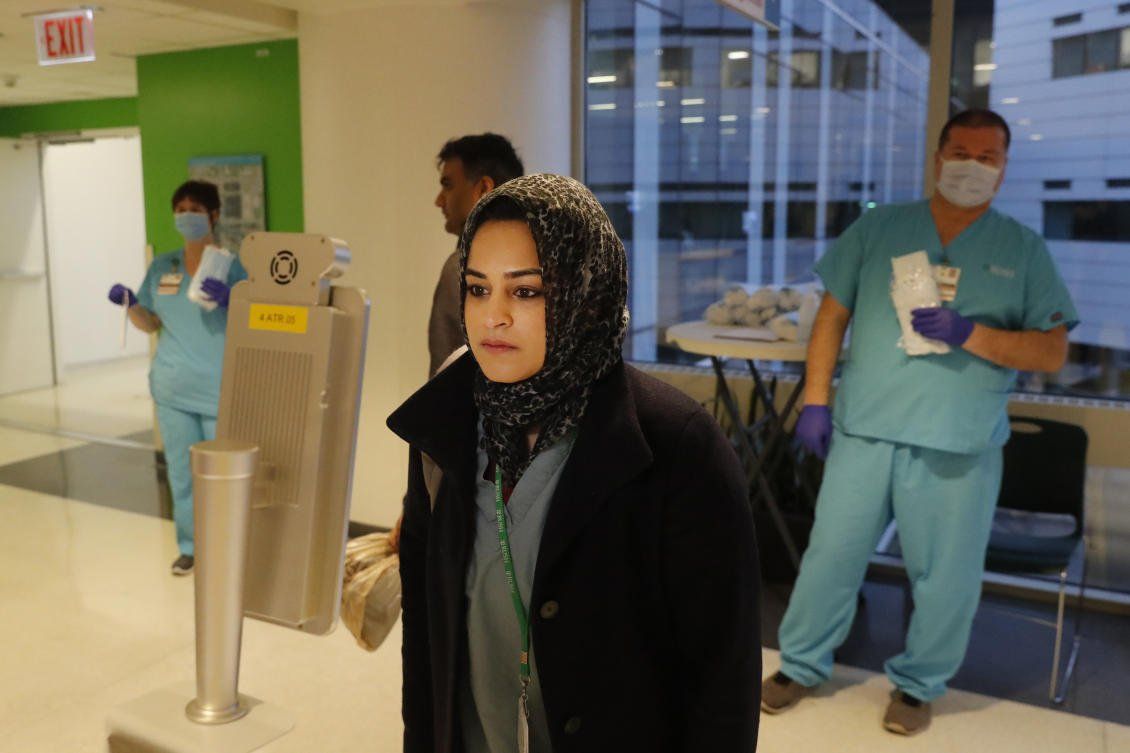 On the first night of Ramadan, respiratory therapist Jumana Azam stayed up through suhoor and only slept after making the prayer at dawn. She had come home at 2 a.m. from an odd shift in the ICU of Rush University Medical Center.
Just weeks ago, Azam's own mortality weighed heavy. She worried that while caring for dying patients, she could contract the new coronavirus herself and end up on the very ventilators she was operating nonstop.
“I was upset and confused, and I didn’t know if I was physically or mentally strong enough to be a frontliner,” she says. At times, she says, her faith wavered.
As Chicago experienced a surge of COVID-19 patients in early April, Azam’s days quickly turned into 16-hour shifts, with barely a break to eat or make one of the five daily prayers.
The physical demands of the job have taken a toll on her, and while abstaining from any food or drink for 15-hour Ramadan fasts, Azam worries she won’t be able to keep up. She started observing the holy month at about age 10, she recalls. For the first time since then, she considered not fasting as the month approached.
“Emotionally and spiritually, this was really hard for me to even reflect on,” she says.
Azam looks forward to this month every year, saying her struggle with hunger, especially while at work, gives her day meaning and purpose.
Last year, Azam, like many other professional Muslims observing the month, decreased her working hours slightly to make the days more manageable. This year, she knows that won’t be possible. Still, Azam is planning to wake up each morning to eat before dawn and try.
“I’m going to take it in stages and try to fast while I’m at work,” she says. “But if I feel like I’m getting light-headed, I’m going to have to break it.”
New York City: Imam Mufti Mohammed Ismail, 38
The An-Noor Cultural Center and masjid is located blocks from Elmhurst Hospital Center in Queens, where patients have been dying from COVID-19 at an alarming rate.
The immigrant-rich neighborhood has been deemed one of New York City's hardest-hit areas. Imam Mufti Mohammed Ismail is the principal of the religious school at An-Noor. Most who are part of the center are Bangladeshi.
“We have lost a lot of Muslim brothers and sisters in my community,” Imam Ismail says.
He says the Bangladeshi community has lost “close to 150 people” to COVID-19 across New York City, many from this neighborhood.
As deaths rise, Imam Ismail is trying to serve community members suffering in other ways. With mosques shuttered as the city reels, volunteers from An-Noor Cultural Center are preparing food boxes for those who would have relied on the center for iftar every evening. With so many from this immigrant community losing jobs, the demand has increased.
“I’m receiving so many phone calls from families who are saying, ‘We are not poor, but the situation has (made) it so hard, so we need a food box,’” Imam Ismail says.
On this day, volunteers, including the imam's son, help him sort food in the prayer area. When the time for afternoon prayer arrives, the men break and pray amid half-assembled food boxes filled with dates, cooking oil, vermicelli and potatoes, standing with a little extra room between them.
They load the items into a car and head off to begin deliveries. Imam Ismail says this gives the center the opportunity to fulfill one of Ramadan's tenets — to serve those less fortunate, regardless of religion. “Once we receive a call asking for help, we never question about the caller’s faith. It’s just a family,” he says. “A human being. We are ready to serve them.”
Minneapolis: Imam Sharif Mohamed
For all the things Muslims are doing without this year, one community in Minneapolis has gained a new voice during the holy month: the call to prayer.
Throughout Ramadan, the adhan — which summons the faithful for prayers five times a day — will be broadcast over loudspeakers for the first time at the Dar Al-Hijrah Mosque.
Mayor Jacob Frey facilitated the noise permit after community leaders requested the service. For Muslims feeling isolated at home, the sound of the adhan will offer connection, says Imam Sharif Mohamed. It will also alert observant Muslims when it’s time to break fast or start abstaining from eating and drinking.
“It’s calming and soothing for them,” he says. “The emotional and spiritual connection, I think, is beyond our imagination.”
Mohamed walked around the neighborhood as the adhan blared out from the mosque and into the streets and buildings surrounding it. Hearing that, he says, took him back to when he was in Somalia.
For non-Muslims, the imam says, this can be an educational experience. And for Muslims, it can be deeply moving.
“I am happy. I am going to cry,” Mohamed Salah, who lives near the mosque, said about hearing the adhan from home. “Something is better than nothing.”

These were the details of the news Bangladesh goes beyond duty to treat coronavirus-infected police officials for this day. We hope that we have succeeded by giving you the full details and information. To follow all our news, you can subscribe to the alerts system or to one of our different systems to provide you with all that is new.

PREV India removes Brazil from the top food exporters to the Arab...
NEXT Pope visits divided Cyprus, eyes on migrants