Thank you for reading the news about Saudi Arabia decked out in red, white & blue for holy month and now with the details

LONDON: Until now few have been privileged to visit the ancient city of Hegra, hewn from the rocks of the Hijaz in northwestern Saudi Arabia over two millennia ago and lost for centuries in the mists of time.

Like its famous twin Petra, some 460 km north in modern-day Jordan, Hegra was created by the Nabataeans, a mysterious people whose Arabian empire of trade flared briefly but brightly more than 2,000 years ago.

But now, as Saudi Arabia increasingly opens its doors to the outside world, the Kingdom is poised to share with that world one of the great forgotten treasures of antiquity.

After more than a decade of one of the most intensive archaeological investigations ever undertaken, Hegra is to be the jewel in the crown of a plan to transform the dramatic landscape and heritage of the AlUla region into a natural and cultural oasis that will once again see visitors from around the world drawn to this important ancient crossroads.

On Wednesday, Crown Prince Mohammed bin Salman, chairman of the Royal Commission for AlUla (RCU), unveils The Journey Through Time, the latest development rooted in Saudi Arabia’s Vision 2030 blueprint for the nation’s future.

Today, we embark on a journey to preserve the world’s largest cultural oasis and advance our understanding of 200,000 years of heritage. The Journey Through Time master plan is a leap forward to sustainably and responsibly develop AlUla, and share our cultural legacy with the world.

Over the next 15 years, AlUla valley, home to Hegra and a multitude of other historical sites, will be transformed into a living museum designed to immerse visitors in 200,000 years of natural and human history.

The Journey Through Time master plan was developed under the leadership of the crown prince and the guidance of Prince Badr, the Saudi minister of culture and governor of the RCU. Amr Al-Madani, CEO of the RCU, told Arab News the master plan has been envisioned “as a way to capture the deep-rooted essence of what AlUla already is — an oasis of unique culture, heritage, nature and community — while curating a timeless legacy with stories of the past to inform the future and open new chapters in AlUla’s unfolding history.”

Five districts, each focused on a particular heritage site and strung out along the spectacular AlUla valley, will together tell the story of the past two millennia.

The districts will be connected by a 20 km Wadi of Hospitality, a “green pedestrian spine” which, together with a 46 km low-carbon tramline that will connect the five sites to AlUla International Airport, will follow part of the route used for centuries by pilgrims and, in the early part of the 20th century, by the historic Hijaz Railway.

A network of trails snaking through the green valley will also allow visitors to explore on foot, or by bicycle or horse.

The Journey Through Time begins in the south of the valley at the Old Town district, the site of an abandoned mudbrick settlement 17 km south of Hegra. The Old Town was occupied until the 1980s, when the occupants abandoned it for the comforts of the newly built modern-day AlUla, a few kilometers to the south. Today it is an intriguing and haunting labyrinthine ghost town.

From AlUla Old Town, visitors will journey north toward District 2, site of the ancient city of Dadan, a predecessor to Hegra. Between 600 and 200 B.C. it flourished as the capital of the mysterious Dadanite and Lihyanite kingdoms, whose fortunes rested on their control of the incense trade routes that passed through the valley.

District 3, Jabal Ikmah, an “open-air library” of petroglyphs, will give visitors a first glimpse of the thousands of ancient rock-art sites and inscriptions to be found throughout the valley and beyond.

The next stop on the Journey Through Time will be District 4, The Nabataean Horizon, a cluster of cultural assets mirroring Nabataean architecture and the perfect curtain-raiser for the last and most spectacular of the five districts: The ancient city of Hegra, which in 2007 became Saudi Arabia’s first UNESCO World Heritage site.

Hegra is situated on a large plain southeast of the Hijaz Mountains, studded with hills of sandstone, isolated or grouped together to form massifs that have been dramatically sculpted by the northwesterly winds that have blown through the region every spring and early summer since the dawn of time.

The winds have also created strange and evocative shapes, such as the three-storey rock 10 km northeast of the modern town of AlUla, sculpted over millions of years to resemble an elephant.

In the center of the site, once served by the 130 wells driven into the rock that made possible the sprawling oasis that supported the ancient city, is the former residential area. Although very little remains above the surface of buildings that were made in antiquity largely from mud bricks, geophysical surveys have revealed tantalizing evidence of underground structures, while parts of the city wall can still be seen with the naked eye.

But without doubt the stars of Hegra are the necropolises that surround the residential area — cities of the dead, featuring more than 90 monumental tombs carved out of the rocks surrounding and overlooking the former city of the living, and dating from about 1 B.C. to A.D. 75.

Of the four main necropolises, Qasr Al-Bint, home to 31 tombs dated from the year nought to A.D. 58, is the most visually dramatic — both from a distance and up close. The exterior facades of many of the tombs here feature carved monsters, eagles, other small sculpted animals and human faces.

As at Petra, which was also created by the Nabataeans, many of the tombs at Hegra feature spectacular carved facades. However, unlike at Petra, many of the facades also carry dated Nabataean inscriptions, in many cases naming the dead and offering unique insights into the lives of the people who once called Hegra home.

The master plan envisages 15 “cultural assets” that will act as landmarks throughout the five districts. These will include galleries, museums, an oasis living garden and, in a salute to AlUla’s role as a crossroads of ancient trade routes, an incense road market.

Education and the acquisition of knowledge will play a key part in the development. In addition to research centers focused on the ancient sites of Dadan and Jabal Ikmah, a flagship component of the plan is The Kingdoms Institute, a global hub for archaeological knowledge and research dedicated to the cultures and civilizations that have inhabited the area for more than 7,000 years. 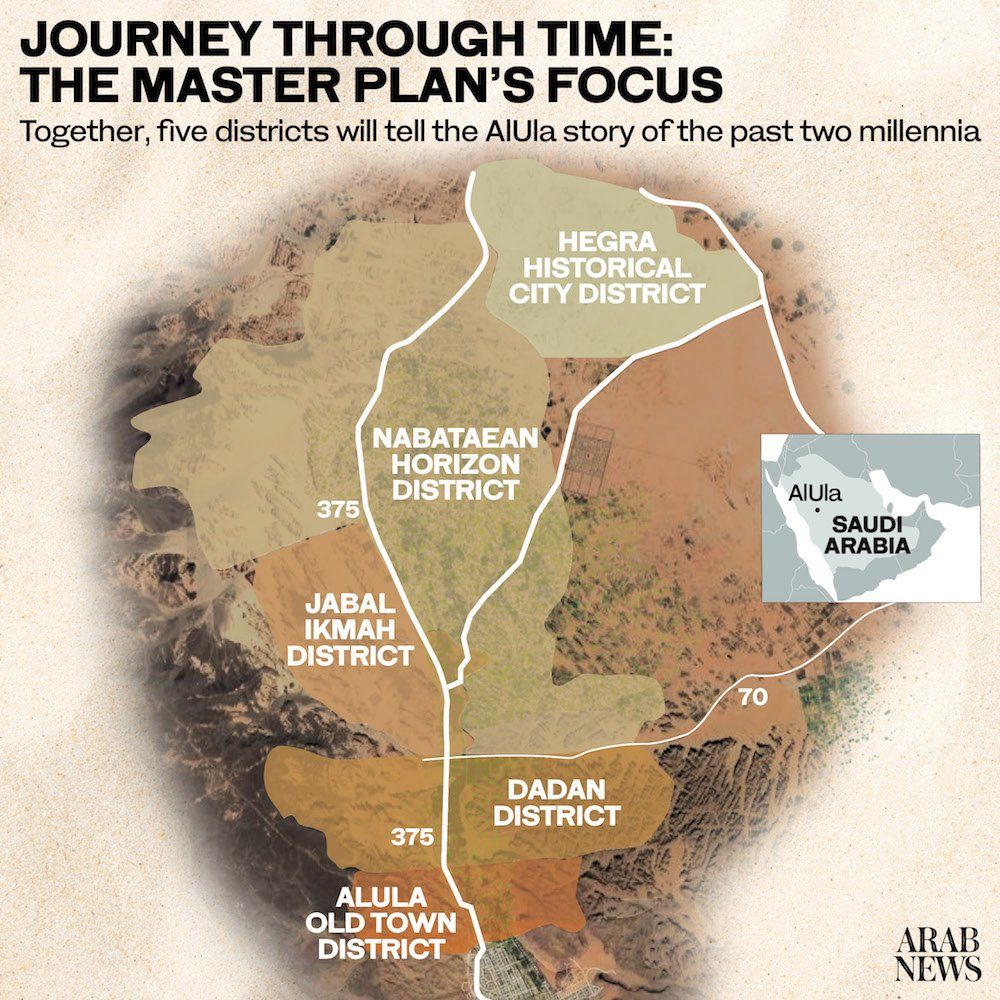 Another key part of the development will be the revival of the Cultural Oasis at the heart of the AlUla valley.

“Through research and innovative solutions from water management to irrigation and land use, the replenishment of the cultural oasis will be a key element of the Journey Through Time master plan,” Al-Madani told Arab News.

“The most intense regeneration efforts will focus on the 9 km heart of the ancient oasis — the ‘green lung’ of AlUla connecting Old Town, Dadan, and Jabal Ikmah — and will trigger a major expansion of AlUla’s green and open spaces.”

With the revival of up to 10 million square meters planned, as “a direct response to the challenges of sustainably and responsibly developing a fragile desert environment,” the Journey Through Time master plan will be the world’s largest cultural oasis regeneration project, creating an enchanting haven for visitors and a unique opportunity for sustainable agricultural production.

In addition, 80 percent of AlUla county will be designated as nature reserves, with key flora and fauna to be reintroduced.

Once complete, the RCU expects AlUla to attract two million visitors every year, boosting its goal of contributing SR 120 billion ($32 billion) to the national GDP and creating 38,000 new jobs in the area by 2035.

With a total of 5,000 “hospitality keys” planned as part of an overall target of 9,400 by 2035, many of those jobs will be in tourism and hospitality.

In each of the five districts visitors will be able to choose from a “tailored blend of living and hospitality options,” ranging from hotels and eco-tourism resorts to luxury lodges and “canyon farms” — carved out of the sandstone rocks that once tempted the Nabataeans to settle here. 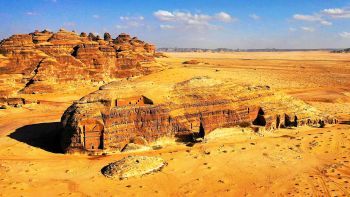 These were the details of the news Saudi Arabia decked out in red, white & blue for holy month for this day. We hope that we have succeeded by giving you the full details and information. To follow all our news, you can subscribe to the alerts system or to one of our different systems to provide you with all that is new.

NEXT Yemen.. “Coalition” announces the destruction of a “secret site” of the...

Merkel: Virus death toll ‘so bitter because it is avoidable’