Jeddah - Yasmine El Tohamy - RIYADH: Saleh Kamel, the Saudi billionaire who rose from humble beginnings to achieve great success as a businessman, media tycoon and philanthropist, died on Monday and has been buried in Makkah — but his legacy is sure to endure.
Even at the age of 79, despite suffering from age-related health issues, Kamel remained active and busy. Turki Al-Dakhil, the Saudi ambassador to the UAE, said in a message posted on Twitter that Kamel, also known as Sheikh Saleh, had called him to share Ramadan greetings.
“He then contacted me throughout the first two weeks (of Ramadan) to facilitate the evacuation of two (Saudi) men who were suffering from chronic diseases,” Al-Dakhil added. “He sponsored their travel through a private jet.”
Kamel was born in Makkah in 1941 to a middle-class family. His father worked in the government sector and was appointed general manager of the Saudi cabinet office.
Abdul Aziz Khoja, a former minister of media and Saudi ambassador to Lebanon and Morocco, met Kamel in high school and their friendship endured for more than 60 years.

Saleh Kamel was a thinker and a Samaritan, who devoted his time and energy to the greater good. We lost a good man.

“He was my childhood friend,” said Khoja. “He served the Arab and Islamic community throughout his life. He made huge efforts to establish Islamic banks and financing.
“He was a thinker and a Samaritan, who devoted his time and energy to the greater good. We lost a good man.”
Kamel’s professional career began early in life, at the age of eight.
“One of the first businesses I launched was when I asked my mother to make me balela (a traditional chickpea soup), and I sold it to my friends in the street,” Kamel said during an interview with the Success Makers TV show.

After attending elementary and middle school in Makkah and Taif, and high school in Jeddah, he graduated from King Saud University in Riyadh in 1963 with a bachelor’s degree in business administration.
While in college, he started a small business called “Dar and Maktab Al-Kashaf Al-Saudi” that sold printed copies of his notes to fellow students. After graduating, he worked at the Saudi Ministry of Finance.
“I joined the ministry to learn and gain knowledge,” Kamel said. “I never dreamed of getting a higher position at the ministry. I used to work as a financial representative at the ministry and had to work with all the ministries in Riyadh, Taif, Jeddah and Madinah. In this job, I gained experience in all sectors and fields.”
After 10 years with the ministry, Kamel moved to the private sector. He founded his flagship Dallah Al-Baraka Holding Company in 1969 in Riyadh, and expanded its activities through Dallah Al-Baraka Group to include financial and banking services, health care, manufacturing, real estate, tourism, trading and more. Dallah Al-Baraka Group also has the honor of being chosen to clean and sterilize the Two Holy Mosques.
Kamel said that the Dallah in the company name came from the nickname for Abdullah that is common in the Saudi western region.
“My grandmother used to call my father Dallah, so I used the name for my big company,” he said.
Kamel was also a well-known investor in the media and satellite television production. He established Arab Radio and Television and formed a partnership with the Arab MBC channel.
Dubbed “the father of contemporary Islamic finance,” he received Malaysia’s Royal Award for Islamic Finance in November 2010. The tycoon’s wealth was estimated to be about $2.3 billion. The businessman’s life and career was based on change, he once said in an interview.
“If I start a business and it becomes a routine, I lose interest in it,” he said. “I am not a daily manager. So after the work settles, I lose my interest in it and I make a new project.”
Kamel believed that all people should have dignity and that all lives are precious and deserve to be honored. He said that he aspired to creating jobs.
“My ambition is to have a strong Saudi economy and a strong foundation, and secondly to create jobs for the unemployed,” he said. 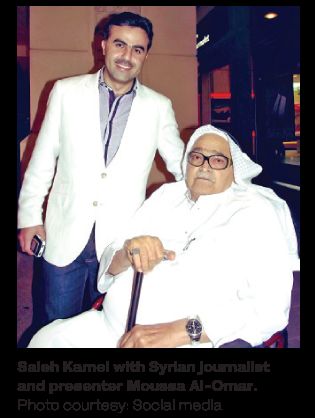 As the chairman of the Jeddah Chamber of Commerce and Industry, it was his hope that every chamber in the Kingdom would focus on reducing unemployment, saying: “If we eliminate unemployment, we eliminate terrorism.”
Mowafaq Al-Nowaiser, the editor-in-chief of Makkah newspaper, said that he will remember Kamel fondly.
“The first time I met him was in his home in 2013, at the meeting that was the birth of Makkah newspaper,” he said.
Al-Nowaiser said that when Kamel founded Makkah newspaper, he wanted in particular to highlight the obituary section, to give the families of the deceased a platform to mourn their loved ones.
“He told me: (The deceased) might not be known around the world; however, they mean the world to their family and loved ones,” said Al-Nowaiser.
Although he ran several successful companies, Kamel still made time for culture. He was an avid reader and culturally engaged on an international scale.
For all his success and accomplishments, Kamel never forgot his roots and one place meant more to him than any other.
“The city of Makkah was very dear to him. He wanted to serve it and everything that has to do with it. It had a very special place in his heart,” said Al-Nowaiser. “He was an intellect. Whether in economy or finance, he spoke in numbers and conversations with him were deep.”

These were the details of the news Saudi Supreme Court to announce start of Eid Friday night for this day. We hope that we have succeeded by giving you the full details and information. To follow all our news, you can subscribe to the alerts system or to one of our different systems to provide you with all that is new.

PREV Saudi Arabia condemns seizure of closed US Embassy in Sanaa by Yemen’s Houthis
NEXT Saudi Arabia announces the provision of a deposit of $3 billion...