Thank you for your reading and interest in the news Mesut Ozil, David Luiz and Arsenal stars take a knee and display 'I can't breathe', 'Black Lives Matter' shirts at the Emirates - in pictures and now with details 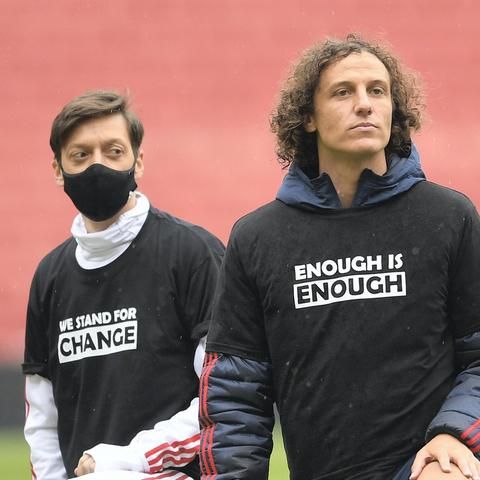 Arsenal players warmed up with 'I can't breathe', 'Black Lives Matter', and 'Colour is not a crime' shirts ahead of a friendly match in preparation for the return of the Premier League next week.

The Gunners players showed their support for the worldwide protests and campaigning sparked by the death of George Floyd in Minneapolis.

Mesut Ozil, David Luiz and Alexandre Lacazette were among the players to take a knee and carry the slogans at the Emirates Stadium, before Arsenal were beaten 3-2 by Championship side Brentford.

Arsenal travel to Manchester City on Wednesday June 17, the first day football resumes in England, and if they claim three points it could mean Liverpool win the title just four days later.

Jurgen Klopp's side hold a 25-point lead and need two wins to guarantee the silverware. However an Arsenal victory at the Etihad Stadium would mean the Reds becoming champions for the first time in 30 years if they beat Everton at Goodison on Sunday, June 21.

To see the pictures of Arsenal players and their slogans, check out the photo gallery above.

Simply click on the arrows or swipe to view the next image.

These were the details of the news Mesut Ozil, David Luiz and Arsenal stars take a knee and display 'I can't breathe', 'Black Lives Matter' shirts at the Emirates - in pictures for this day. We hope that we have succeeded by giving you the full details and information. To follow all our news, you can subscribe to the alerts system or to one of our different systems to provide you with all that is new.