Thank you for your reading and interest in the news Kante, Loftus-Cheek, Giroud and Willian star as Chelsea go goal crazy at Stamford Bridge and now with details 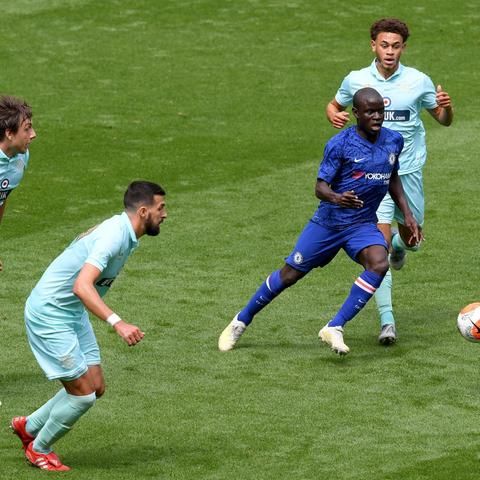 N'Golo Kante was back in action for Chelsea at Stamford Bridge after returning to training later than his teammates because of safety fears amid the coronavirus pandemic.

Chelsea go to Aston Villa on Sunday as the top flight resumes after being halted by the pandemic in March, and French World Cup winner Kante was among the stars on show who relished the friendly against Queens Park Rangers with a 7-1 victory on Monday.

The Blues sit in fourth place and will be looking for a strong finish to the season to seal a place in next season's Champions League.

They have a three-point lead over nearest rivals Manchester United, but could have slipped to fifth on goal difference before that clash at Villa Park if Ole Gunnar Solskjaer's side - unbeaten in 11 in the League - win at Tottenham on Friday.

Ruben Loftus-Cheek scored twice as Chelsea routed the Championship side.

The midfielder has been out for more than a year after rupturing his Achilles during a friendly at New England Revolution at the end of last season.

To move on to the next slide, click on the arrows or if using a mobile device, simply swipe.

These were the details of the news Kante, Loftus-Cheek, Giroud and Willian star as Chelsea go goal crazy at Stamford Bridge for this day. We hope that we have succeeded by giving you the full details and information. To follow all our news, you can subscribe to the alerts system or to one of our different systems to provide you with all that is new.