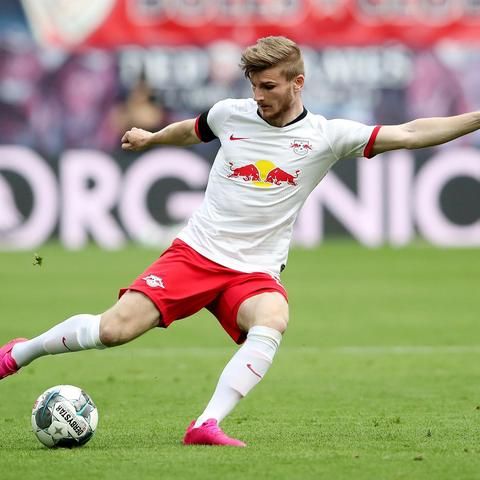 RB Leipzig gave Chelsea-bound striker Timo Werner a farewell gift ahead of the club's final Bundesliga home game of the season on Saturday.

Prior to the match against Borussia Dortmund, which Leipzig lost 2-0, Werner was presented with a special mosaic by sports director Markus Kroesche and managing director Oliver Mintzlaff.

Werner, 24, sealed a €55 million (Dh226m) transfer to Chelsea last week and has signed a five-year contract with the Premier League club. The Germany international will complete his move at the end of the season, subject to a medical.

Werner has been in prolific form for Leipzig this season, scoring 32 goals and registering 13 assists in 43 appearances in all competitions.

After being heavily linked with a move to Premier League champions-in-waiting Liverpool, it was Chelsea who swooped in to complete the deal before Werner's buyout clause expired.

"I am delighted to be signing for Chelsea, it is a very proud moment for me to be joining this great club," Werner said. "I of course want to thank RB Leipzig, the club and the fans, for four fantastic years. You will forever be in my heart.

"I look forward to next season with my new teammates, my new manager and of course the Chelsea fans. Together we have a very successful future ahead of us."

Werner is Chelsea's second high-profile signing of 2020. The German striker will be joined at Stamford Bridge by Morocco international winger Hakim Ziyech, who in February signed a five-year contract after the Blues agreed a £40 million (Dh181.8m) fee with Dutch champions Ajax.

While Werner still has one more match in Leipzig colours - away at Augsburg on Saturday - Ziyech has already played his final game for Ajax after the Dutch season was cancelled due to the coronavirus pandemic - a decision Ziyech slammed as "nonsense".

These were the details of the news Chelsea-bound Timo Werner handed farewell gift from RB Leipzig for this day. We hope that we have succeeded by giving you the full details and information. To follow all our news, you can subscribe to the alerts system or to one of our different systems to provide you with all that is new.

PREV Basketball .. Al-Ahly is the champion of the Arab Club Championship...
NEXT Lebanon guarantees its qualification to the semi-finals