It's becoming customary to see Mohamed Salah gleefully joined on the Anfield pitch by his family as another successful season draws to a close.

Only this time it has been slightly different - for he and his wife and children have been able to clutch the Premier League trophy.

Liverpool celebrated their first Premier League success since 1990 last week following a thrilling victory over Chelsea, although the title was wrapped up long before that.

Fireworks exploded from the roofs at Anfield and the players partied inside the stadium, while thousands of fans gathered outside. Salah was pictured wrapped in the Egyptian flag as he shared the trophy with the likes of Jordan Henderson and Virgil van Dijk.

Once the celebrations had calmed, Salah was able to return to Anfield to enjoy a few quiet moments with his family.

His daughter Makka starred on the pitch at the end of the 2018/19 season when she entertained the crowd by dribbling the ball across the grass and scoring in an empty net in front of the crowd. 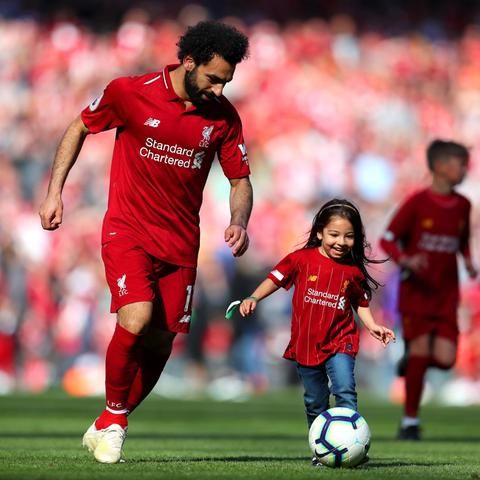 That time around, Liverpool had just been pipped to the league title by Manchester City.

She then made another appearance on the turf at the 2019 Champions League final after Liverpool defeated Tottenham Hotspur.

Liverpool conclude their season with a trip to Newcastle United on Sunday. Their lead over second-placed Manchester City is currently 18 points, having lost just three matches.

Salah sits fourth in the race tp finish as the Premier League's top scorer with 19 - four behind leader Jamie Vardy.

These were the details of the news Mohamed Salah introduces his family to the Premier League trophy after Liverpool triumph for this day. We hope that we have succeeded by giving you the full details and information. To follow all our news, you can subscribe to the alerts system or to one of our different systems to provide you with all that is new.