Thank you for your reading and interest in the news Ranked: Real Madrid lead Barcelona as football's most valuable brand, Liverpool see biggest increase – top 10 in pictures and now with details 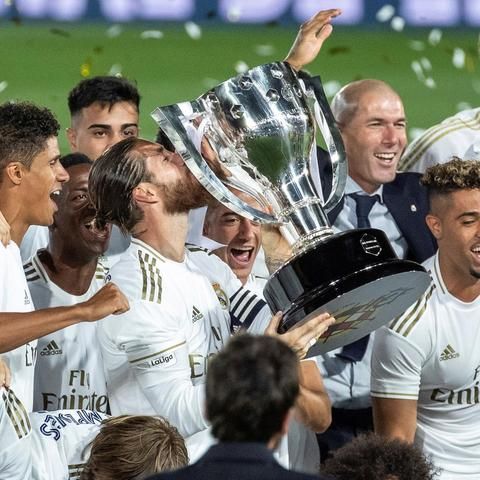 Real Madrid have once again been named the most valuable brand in football, although rivals Barcelona have narrowed the gap, according to the Brand Finance Football Annual report.

Based on the findings in the report, the newly-crowned La Liga champions retained the top position despite seeing their brand value drop by around 14 per cent – a consequence of the effects of coronavirus disruption and their 2018/19 results that saw the club exit the Champions League in the Round of 16.

Barcelona, meanwhile, saw a minor increase in their brand value of around 1.4 per cent, reducing the gap to €6 million (Dh25.9m).

Led by the two giants of Spanish football, the rest of the top 10 is dominated by English Premier League clubs with the exception of Bayern Munich and Paris Saint-Germain, champions of Germany and France respectively.

Perhaps unsurprisingly, Liverpool saw the biggest percentage increase of clubs ranked in the top 10, with the reigning European, world, and Premier League champions experiencing a six per cent boost.

Italian league winners Juventus, spearheaded by Cristiano Ronaldo, are placed just outside the top 10, followed by Borussia Dortmund in 12th.

Browse through the photo gallery above to view the top 10 most valuable football brands. Each slide contains the current value and its percentage change from 2019.

These were the details of the news Ranked: Real Madrid lead Barcelona as football's most valuable brand, Liverpool see biggest increase – top 10 in pictures for this day. We hope that we have succeeded by giving you the full details and information. To follow all our news, you can subscribe to the alerts system or to one of our different systems to provide you with all that is new.

PREV Al-Ittihad of Alexandria supports Talaat Youssef after he was infected with...
NEXT Musimani to his wife after the Al-Ahly session: Thank you, Director.....