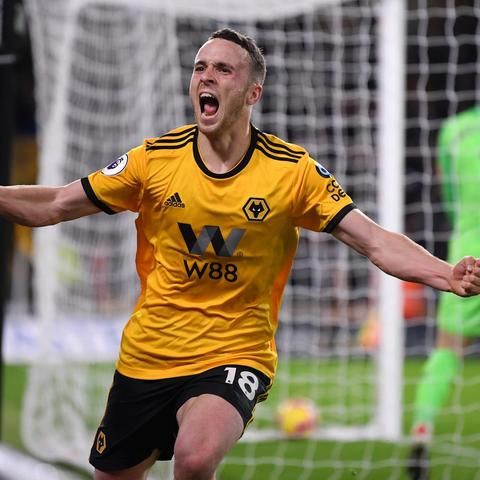 Liverpool pulled off a second transfer coup in the space of two days after agreeing a deal to sign Diogo Jota from Wolves, according to reports.

Just hours after Thiago Alcantara's move from Bayern Munich was confirmed, the Reds tied up a £41million (Dh195m) transfer – potentially rising to £45m – for the 23-year-old who has spent the last three years at Molineux.

It took Liverpool's spending in just over 24 hours to £70m – although £9m will be recouped with the sale of teenage defender Ki-Jana Hoever to Wolves with the prospect of the whole deal being worth £13.5m plus a 15 per cent sell-on clause.

Jota, who was left out of Wolves' first two matches of the season, is set to sign a five-year contract on Saturday, the Press Association reported.

It is understood Wolves have agreed to flexible payment terms which will see Liverpool pay as little as 10 per cent of the initial £41m fee over the next 12 months.

Liverpool turned their attention to the Portuguese after Watford quoted them in excess of £40m for Ismaila Sarr.

Jota, who can play across the forward line, will provide important back-up for Mohamed Salah, Roberto Firmino and Sadio Mane.

These were the details of the news £70m spent in 24 hours – Liverpool agree deal for Diogo Jota as well as signing Thiago for this day. We hope that we have succeeded by giving you the full details and information. To follow all our news, you can subscribe to the alerts system or to one of our different systems to provide you with all that is new.

PREV Salah .. the greatest African scorer in the history of the...
NEXT Clasico analysis .. Give me Vinicius and a counter-attack and I...