The player, Sergio Ramos, captain of Real Madrid and the Spanish national team, shared his fans and followers through his official Instagram account, a new photo he collects with Portuguese soccer star Cristiano Ronaldo in the locker room, after the end of the friendly match between Spain and Portugal that was held on Wednesday, at the stadium “Jose Alfaladi.” They were accompanied by the player Bebo.

The captain of Real Madrid and the Spanish national team expressed his great happiness at his meeting with Pepo and Cristiano Ronaldo, commenting on the photo he posted on Instagram, saying: “We are still around … and there is more to come.!Happy to see you, my friends. “ 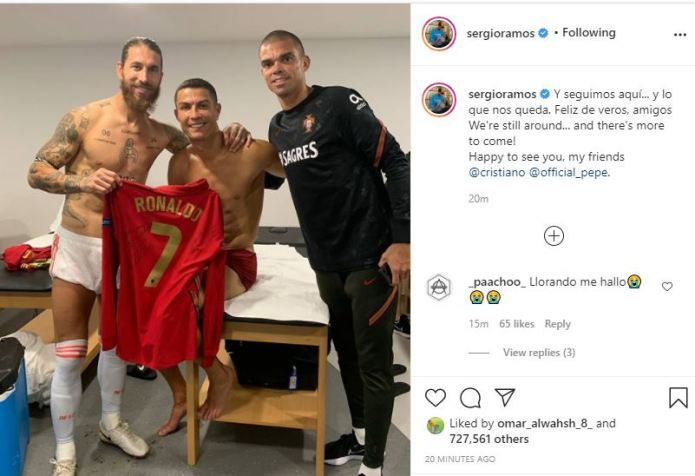 The Spain-Portugal friendly match ended in a goalless draw, with the participation of Portuguese soccer star Cristiano Ronaldo, and the two teams tried to score any ball into the net, but they failed. 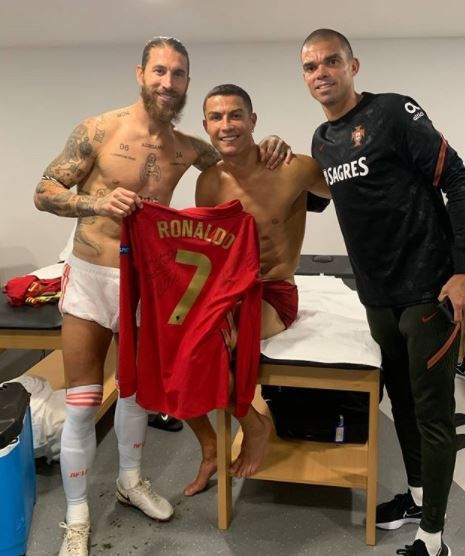 Sergio Ramos, captain of Real Madrid and the Spanish national team, scored a record with his country after his participation in the goalless draw of Aroja against his Portuguese counterpart, in the match held at the “Jose Al Valadi” stadium, as part of the teams’ preparations for the third and fourth rounds of the group stage of the Nations League competition European.

Ramos participated as a substitute in the 75th minute of the match, raising his tally of minutes with the Spanish national team to 13,340 minutes, becoming the most player with his country in terms of minutes in history, surpassing the previous record holder, legendary goalkeeper Iker Casillas by only 4 minutes.

The Spanish national team is preparing to face Switzerland and Ukraine in the European Nations League Championship on October 10 and 13, respectively.

Spain is at the top of its group in the European Nations League with 4 points from a draw with Germany and a victory over Ukraine.

Enrique has called up 25 players in the La Roja list for the three matches, and the list of the Spain national team witnessed the summoning of a number of young faces, such as Danny Olmo of Leipzig, Germany, and Eric Garcia, Manchester City defender, and Arsenal’s Danny Ceballos has returned on loan from Real Madrid, while Thiago Alcantara, the new Liverpool player, is absent from the injury Coronavirus.

These were the details of the news Watch .. Ramos with Cristiano Ronaldo in the locker room after... for this day. We hope that we have succeeded by giving you the full details and information. To follow all our news, you can subscribe to the alerts system or to one of our different systems to provide you with all that is new.

Al-Ahly reveals the developments of Mohamed El-Shennawy’s injury before the start...

A medical recommendation raises doubts about the presence of Talaat Youssef...