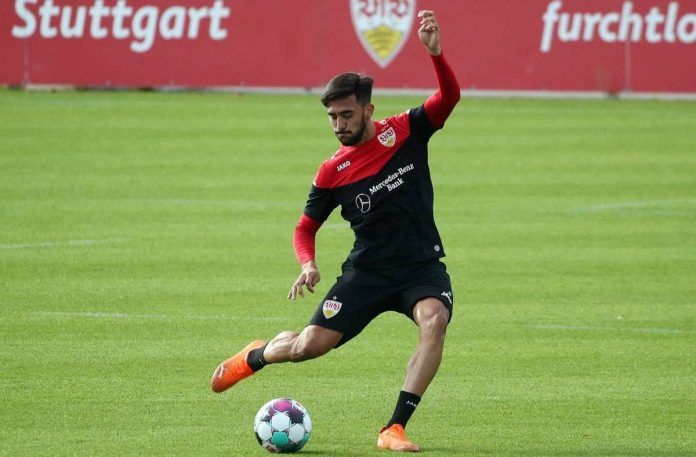 Due to the failures of Waldemar Anton and Konstantinos Mavropanos, VfB coach Pellegrino Matarazzo has to rebuild his defense in the game at Hertha BSC. Nicolas Gonzalez is initially expected on the bench.

Stuttgart – Fourth Bundesliga game, fourth defense formation: Due to the failures of his two injured central defenders Waldemar Anton (ankle) and Konstantinos Mavropanos (meniscus tear), VfB coach Pellegrino Matarazzo has to play in the away game this Saturday (3:30 p.m.) at the Berlin Olympic Stadium at Hertha BSC rearrange his defense again.

“During the international break, we worked on developing the mistakes we made in previous games,” said Matarazzo, commenting that his team has already conceded five goals with four points after the three opening games despite the passable start to the season. Many of them according to standards. Nevertheless, the Stuttgart head coach wants to hold on to his back three. Thanks to the large squad, the 42-year-old still has various personnel options despite the failures. It is quite possible that Atakan Karazor will take on the role of the middle man in the back three, as in parts of the previous second half of the season.

Gonzalez is not in the starting XI

“Hertha is an opponent that is difficult to calculate,” says Matarazzo, who with his team also wants to set offensive accents on the opponent’s place. Nicolas Gonzalez, who is fully in training again, should sit on the bench at the beginning. Meanwhile, Sasa Kalajdzic is in the starting line-up and hopes to score a goal in the fourth Bundesliga game of his career as in the previous three.

Click through our picture gallery: This is the expected line-up of VfB Stuttgart in the game at Hertha BSC.

*The article has been translated based on the content of Source link by https://www.stuttgarter-nachrichten.de/inhalt.aufstellung-des-vfb-stuttgart-nicolas-gonzalez-uebernimmt-die-joker-rolle.501db00f-ef4b-4173-aa6f-34750a2f691f.html
. If there is any problem regarding the content, copyright, please leave a report below the article. We will try to process as quickly as possible to protect the rights of the author. Thank you very much!

These were the details of the news Line-up of VfB Stuttgart: Nicolas Gonzalez takes on the role of... for this day. We hope that we have succeeded by giving you the full details and information. To follow all our news, you can subscribe to the alerts system or to one of our different systems to provide you with all that is new.

PREV Nour after the “caliphate” of Abdul Ghani in victory: deals from...
NEXT Farouk Jaafar: Mohamed Sharif is “not an international player”