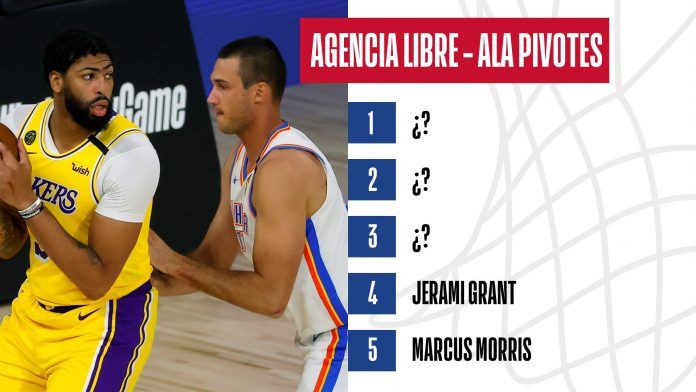 The players who will (or could be) free agents in one of the inside positions are a mix of shooters and defenders, led by seven-time All-Star and recent champion Anthony Davis, although their future doesn’t seem far from Los Angeles.

The Free Agency 2020 begins to take shape after the completion of the recent season, which saw Los Angeles Lakers crowned champions after defeating Miami Heat in Finals. Although we still do not have a defined date, the reports point to the beginning of December for the start of the market.

We continue with our ranking of the best players available by position with power forwards, a list headed by the seven-time All-Star and recent champion Anthony Davis, although the most fair is to look behind him since his future seems clear. With that in mind, here are the top 4 in Free Agency 2020, plus some honorable mentions.

Note: Montrezl Harrell, Serge Ibaka, Derrick Favors and Christian Wood were taken as pivots, so they are not included in this list.

Has a $ 28.8 million player option expected not to take to become an unrestricted free agent. Although of course, the plan is to then sign a maximum contract with the Lakers. After he was part of the purple and gold championship, the NBA.com Staff ranked him the third best player in the league for the 2019-2020 season. A now consecrated star who, as several say (including LeBron James), it is just scratching the surface of its potential.

Gallinari is coming off one of the best seasons of his career. His greatest quality is his ability to open the court and score 3-pointers with consistency. According to NBA.com, almost half of his field goal attempts this season were catch-and-shoot triples, and he scored 41.8% of those chances, one of the best numbers in the league. Injuries have been a concern in his career, but he was in 62 of 72 games for the Thunder in the Regular Season. A key fact: He warned that his priority is to sign for a team with aspirations to the ring over a contract of great value.

Speaking of shooters, Bertans was relentless this season. Not only was he among the players who shot the most 3-pointers at 8.7 per game, but he made 42.4% of them. The only players in NBA history who have had similar numbers in a single season are Stephen Curry (four times), Klay Thompson and Duncan Robinson. Bertans also has no distance limit and is capable of doing this:

With the triple at its highest peak in today’s NBA, Bertans could make a lot of money as an unrestricted free agent. There should be plenty of candidates to search for it.

Grant has a $ 9.3 million player option on his contract for the following season. he plans to turn down to become an unrestricted free agent. Jerami proved to be one of the league’s most versatile defenders in the 2020 Playoffs.He spent time covering Donovan Mitchell and Rudy Gobert in the First Round, with Kawhi Leonard and Paul George in the Second Round, followed by LeBron James and Anthony Davis in the Conference Finals. Offensively he is an athletic finisher around the rim, and his outside shooting is on the rise (38.9% in Regular Phase in 2019-2020, with 3.5 attempts per game).

Morris spent the 2019-2020 season between the New York Knicks and the LA Clippers. He got off to a slow start with the Angels, but gave them an efficient scoring input in the Playoffs, with 11.8 points per game on 50.5% from the field and 47.5% on triples. Marcus is a solid defender who can defend multiple positions. At its best, it can be one of the top 3 & D’s.

The opinions expressed herein do not necessarily reflect those of the NBA or its organizations.

*The article has been translated based on the content of Source link by https://ar.nba.com/news/nba-agencia-libre-2020-mejores-ala-pivotes-mercado/arrel0ur35871x4eqlhg3me4n
. If there is any problem regarding the content, copyright, please leave a report below the article. We will try to process as quickly as possible to protect the rights of the author. Thank you very much!

These were the details of the news Free Agency 2020: Who are the best power forwards available on... for this day. We hope that we have succeeded by giving you the full details and information. To follow all our news, you can subscribe to the alerts system or to one of our different systems to provide you with all that is new.

PREV Al-Ahly competes with Mallorca, Spain, to include the talent of the...
NEXT The date of the match between Egypt and Libya and the...

Gold prices are down 5 pounds in evening trading for the...

Gold prices are down 5 pounds in evening trading for the...