The Vuelta a España has one of the few opportunities for the sprinters on Thursday. The route of the short transitional ride to Aguilar de Campoo has relatively few vertical meters. Will this be the second bunch sprint of this Vuelta? Cycling Flash previews the course and the favorites.

After a number of days full of tough climbing, the fast men seem to be on the move again during the ninth stage. Sprint opportunities are scarce in the Vuelta a España, but this stage through the region of Castile and Leon offers one. The ride between Castrillo del Val and Aguilar de Campoo is the flatest to date, with only a good thousand vertical meters. Anti-climbers don’t turn their hands around that either. 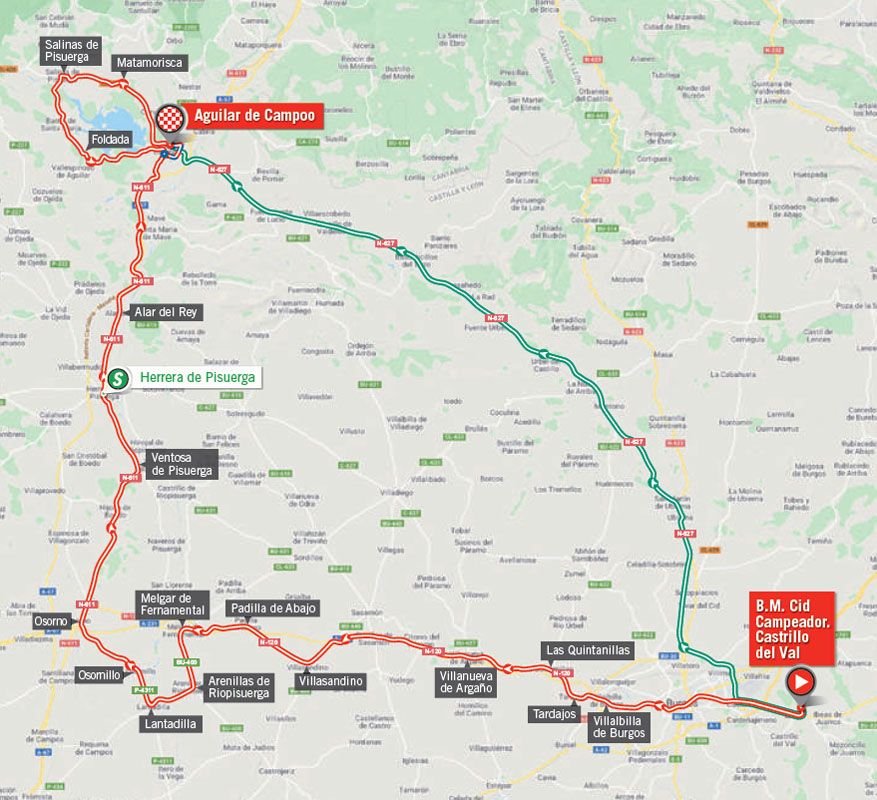 Castrillo del Val is a town of less than eight hundred inhabitants, a stone’s throw from Burgos. In Castrillo del Val you will find the monastery of San Pedro de Cardeña. The Spanish folk hero Rodrigo Diáz de Vivar, better known as El Cid Campeador, was buried there for a long time. Just north of the town is a military center that bears his name and that is where the ninth stage of the Vuelta will start. We don’t seem to be expecting a clash of weapons from the classification men in this stage.

The race starts with a trip of about seventy kilometers in a westerly direction. The caravan soon passes through Burgos, followed by the A-231 to Osorno la Mayor. From there the crowd heads north, towards the finish town of Aguilar de Campoo. After 122 kilometers of race, the race crosses the finish line for the first time. Riders already have the chance to take in the ultimate final. Aguilar de Campoo is where the Tour of Castile and Léon started in 2017. This round was won by Jonathan Hivert, but in this stage the Frenchman from Total-Direct Energie has less chance of success: the final is anything but suitable for him. 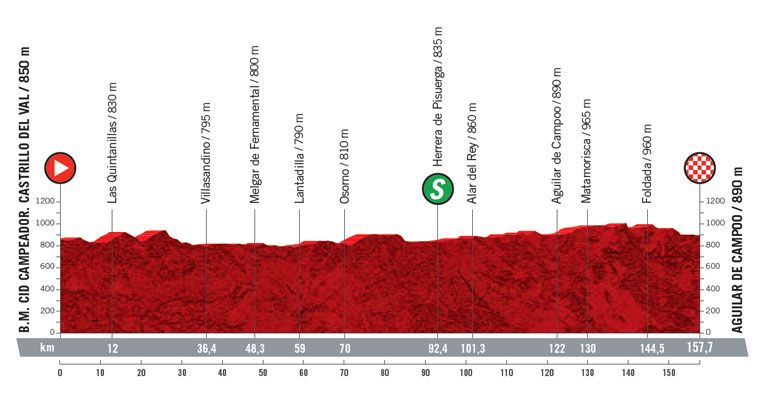 After the first finish passage it is still 35 kilometers to the final finish. The stage will end with a round trip around the reservoir of Aguilar, anti-clockwise. This 247 million cubic meter basin has been supplying many households with electricity since 1963. The reservoir is also very suitable for water sports enthusiasts. The riders don’t have to worry about getting wet; they drive around the lake in a wide arc. Sometimes it goes up for a little while, but it doesn’t amount to much.

Can the term ‘chronicle of an announced bunch sprint’ be used in this stage? It seems like that, although it is still necessary to pay attention in the final phase. At four and a half kilometers from the end there is a sharp bend and five hundred meters later the riders turn into the main road via a similar kind of turning back bend. With approximately 1,300 meters to go, there is still a turning back to be had. And the danger has not yet passed: at five hundred meters the road narrows and there is a roundabout. It’s not perilous, but GC riders will nevertheless breathe a sigh of relief as they get through this safely.

Thursday’s ride is one of the few opportunities for daytime success for sprinters during this Vuelta. In theory it is always possible that a breakaway group will make it to the end, but the sprinter teams will not give attackers too much space. In addition, the course does not offer many obstacles that make a hunt difficult. 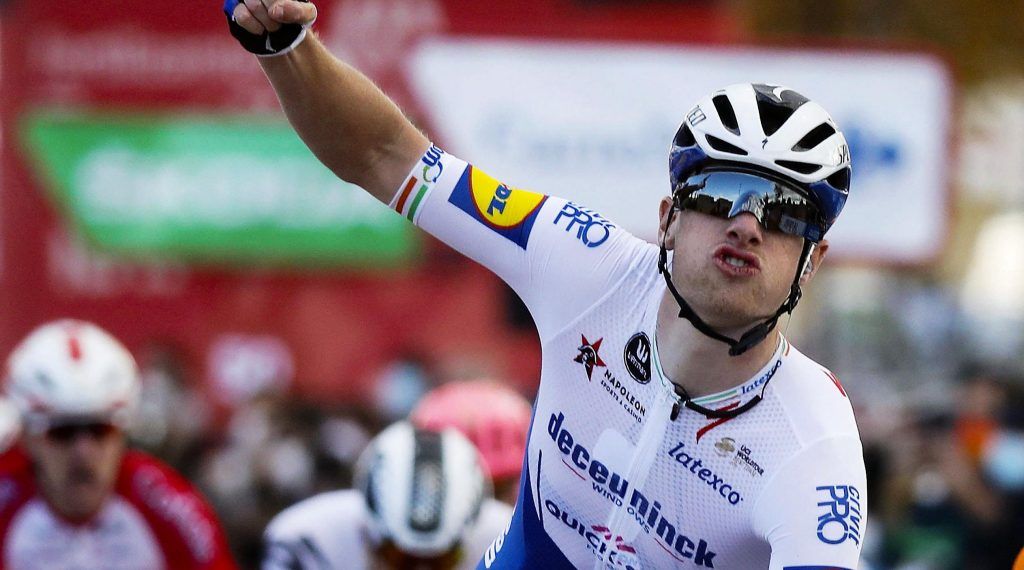 Sam Bennett is the top favorite for this stage for several reasons. The Irishman won by force majeure last Friday and can therefore rightly call himself the fastest sprinter in this peloton. Moreover, he can count on the full support of a very strong team. In the final of the stage to Ejea de los Caballeros, he was dropped in a seat by his teammates from Deceuninck-Quick Step, where he has an experienced lead-out in the person of Michael Mørkøv.

Jasper Philipsen is his main challenger. The young Belgian of UAE-Emirates tried last Friday with a surprise attack to prevent a victory from Bennett, but was still beaten by the faster Irishman in extremis. Should Bennett not be in an ideal position to sprint for whatever reason, Philipsen is one of the main contenders. The same can be said of Pascal Ackermann. The German from BORA-hansgrohe will probably have to go up to speed in a direct duel with Bennett, but has already proven more than once that he knows how to make a final sprint to his will.

At Lotto Soudal they count on the young Gerben Thijssen. The 22-year-old Vuelta debutant impressed with a handsome fifth place in the first bunch sprint. It is up to him to match or improve this performance at the next opportunity. Team Sunweb Max Kanter played out in the sprints. The 23-year-old German should normally be able to have a new top 10 listing written down.

The number of Italian contenders can be counted on the fingers of one hand. Especially after Matteo Moschetti did not arrive in time on Tuesday in the ride to Villanueva de Valdegovia. Actually there is only one: Jakub Mareczko. The CCC sprint leader has no contract for next season yet and will therefore be motivated to put himself in the spotlight. The Spanish hope is pinned on Jon Aberasturi. The Basque of Caja Rural-Seguros RGA sprinted in Ejea de los Caballeros with an eleventh place just outside the top ten and will undoubtedly want to improve.

The peloton also houses a handful of names of fast men who will compete for a place of honor. The French Emmanuel Morin and Lorrenzo Manzin are the spearheads of Cofidis and Total Direct Energie. At EF Pro Cycling we find the Dane Magnus Cort back, while at Mitchelton-Scott Dion Smith may show himself in the sprints. Mihkel Räim is the sprinter of service at Israel Start-Up Nation. Reinardt Janse van Rensburg defends the honor of NTT Pro Cycling. Will one of them provide a thunderous surprise?

The weather conditions on Thursday lend themselves to a pleasant course. With sixteen degrees Celsius it is not particularly warm, but it will at least remain dry. The wind comes from the southwest and has only force 2.

The Vuelta a España is broadcast on weekdays by Sporza and Eurosport. Both Eurosport (commentary by Sander Kleikers and Karsten Kroon) and Sporza (with Renaat Schotte and José de Cauwer) will start live at 2.35 pm.

These were the details of the news Vuelta 2020: Preview of the ninth stage to Aguilar de Campoo for this day. We hope that we have succeeded by giving you the full details and information. To follow all our news, you can subscribe to the alerts system or to one of our different systems to provide you with all that is new.