History is only 21 years old, yet this climb already has a mythical status. The Alto de El Angliru is more than twelve kilometers long, but especially the strip about three kilometers before the end with a gradient of 23.6% is terrifying for the riders. On Sunday, this climb is the big challenge for Wout Poels, who has already finished second twice on this monster of Asturias. “Fortunately, I am conditionally ready again,” Poels looks ahead.

The current Dutch national coach Koos Moerenhout once said: “The Angliru is an artist’s work. You almost have to get into your bike to get to the top. ” Alberto Contador, the last winner on the climb in the Vuelta a España in 2017, judged: “You can hardly place an attack on this goat path, you just have to stay in your rhythm.”

Yet especially the name of David Millar is associated with the Angliru. While the weather gods beat the riders in the fifteenth stage of the Vuelta 2002 with hail, rain and gusts of wind, the Briton fell three times on the climb. One meter before the finish he squeezed the brakes demonstratively. He took off his number and then let it flutter to the ground with a sense of drama. Despite his ninth place in the standings, he refused to continue the race.

Wout Poels laughs at the incident. The Limburger is eagerly looking ahead to Angliru. Last year in the Dauphiné he was told that he was still the winner of the Angliru stage in the Vuelta in 2011. Because all results of Juan José Cobo from 2009 to 2011 were retroactively deleted on the basis of abnormal blood values ​​in his biological passport, Poels is now suddenly on the honor roll of this epic mountain.

Paper win
“A paper victory, which to be honest, I don’t value that much”, he is honest. “Of course it is nice that my name is now on this list, but you would prefer to cross the line with your hands in the air and be honored on top of that mountain. Now I have never felt the real euphoria. ”

According to many, Poels was also the best man on the Angliru in 2017. He then had to follow the stable orders within Team Sky and stay with leader Chris Froome to defend his red jersey. As a result, he was not allowed to react to an attack by Alberto Contador and he crossed the finish line seventeen seconds later than the Madrid.

“The Dutch cycling supporters quickly shout in their euphoria that I could have won there. I find it too easy to say that I could have gone up a notch to follow Contador. In the end I didn’t have that much surplus on that climb either. If, if … we don’t buy anything for that. ”

It is the sobriety that characterizes Poels. Big talk is not for him. Humor, on the other hand, typifies him all the more. Especially now that he is back in the forefront of the rankings and can compete with the better climbers in this Vuelta a España, the smile curls around the corners of his mouth again.

“Of course I am very relieved that things are going well now. In 2020 I have only been able to show my level in Valencia in February. This year I am playing for Bahrain-McLaren for the first time and you want to prove yourself in a new team. Due to the corona lockdown and the crash in the first stage in the Tour de France, I hardly rode any good races anymore. Especially the fall in the Tour hit hard. In the training sessions leading up to the start in Nice, I felt very strong uphill. ”

Ripped rib
In a crash three kilometers before the finish of the first stage to Nice, Poels tore a rib and bruised his lung. His Tour de France was torture. For two weeks he battled the pain and the time limits. “In the last week I got through it and I was able to show myself two more stages in front.”

“Have I considered stopping in the Tour to fully focus on another Grand Tour? Not really. In a normal year I probably would have. Due to the pandemic, we riders did not know where we stood. Would the Tour make it to Paris? Could the Giro get to Milan? And would the Vuelta still start? With all those uncertainties I could be happy that I was in the race with a jersey number. That is why I continued cycling. ” 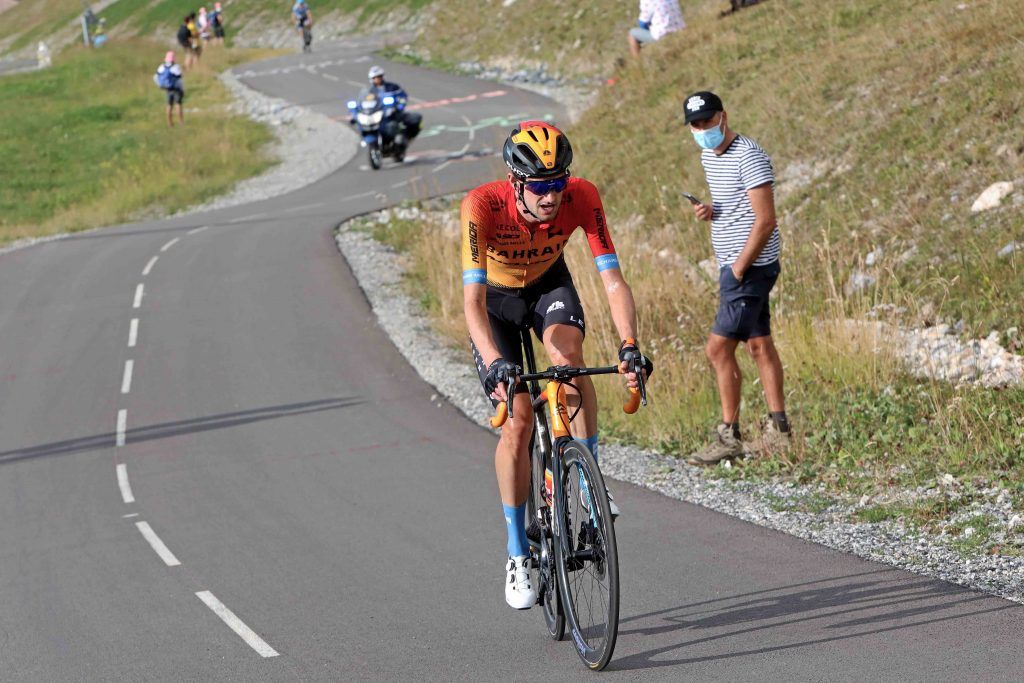 Poels secretly hoped for good results in the Ardennes classics. As the former winner of Liège-Bastogne-Liège (2016), he has an honor to uphold in the Walloon country. “I don’t know why, but I didn’t advance in that classic (Poels finished 87th, ed.). That was mentally a blow. That’s why I was eager to ride the Vuelta. I would like to rectify something. ”

Coronabubbels
Life in the corona bubbles hardly disturbs him. During the grand tours, the teams nowadays live completely isolated from the outside world. “But in other years you are actually alone with your team in a grand tour. It is cycling, massaging, eating and sleeping. Your focus is completely on the game, so you don’t look for distraction. “

In his last training blocks towards the Tour of Spain, Poels felt that his form was increasing. Although he did lose some ground in the first two tough stages. “I probably needed that hardness of those two rides.”

In the third stage to La Laguna Negra de Vinuesa he arrived uphill just behind Dan Martin, Primož Roglič and Richard Carapaz in fourth place. An incredible boost. Just when Poels has confidence on his side again, he can rise above himself. He is now ninth in the rankings. “Maybe I can move up to sixth place this weekend. The difference with the three riders in front of me is only nineteen seconds. There are certainly possibilities with these two tough rides. ”

And of course he is looking forward to Sunday’s stage with the finish on the Alto de El Angliru. After two second places, it is time to get real shinen. “I hope to ride from the front as usual”, the now 33-year-old North Limburg rider looks ahead.

Steep climbing
“I can’t answer the question why this climb suits me. Somehow I digest the extremely steep parts well. I already feel in my element on the Wall of Huy. But I certainly do well in the longer climbs with strips with gradients of more than twenty percent. For example, in the Giro d’Italia I also drove well up the Monte Zoncolan twice. Fortunately, I found my good legs again just in time for the Angliru. ”

These were the details of the news Wout Poels ready in time for the Angliru for this day. We hope that we have succeeded by giving you the full details and information. To follow all our news, you can subscribe to the alerts system or to one of our different systems to provide you with all that is new.