Thank you for reading the news about REVIEW: Honor 9X Pro and now with the details

Aden - Yasmine El Tohamy - When you put that 'Pro' tag on your device, expectations will be high, but alongside that you could balk at the potential price. Honor - a brand that knows how to play the low-price game - aims to change this notion.

For this run, we're going to take a look at one of its newest devices, the Honor 9X Pro. And don't let its name fool you; that 'Pro' tag doesn't mean you'll have to pony up a lot for it. 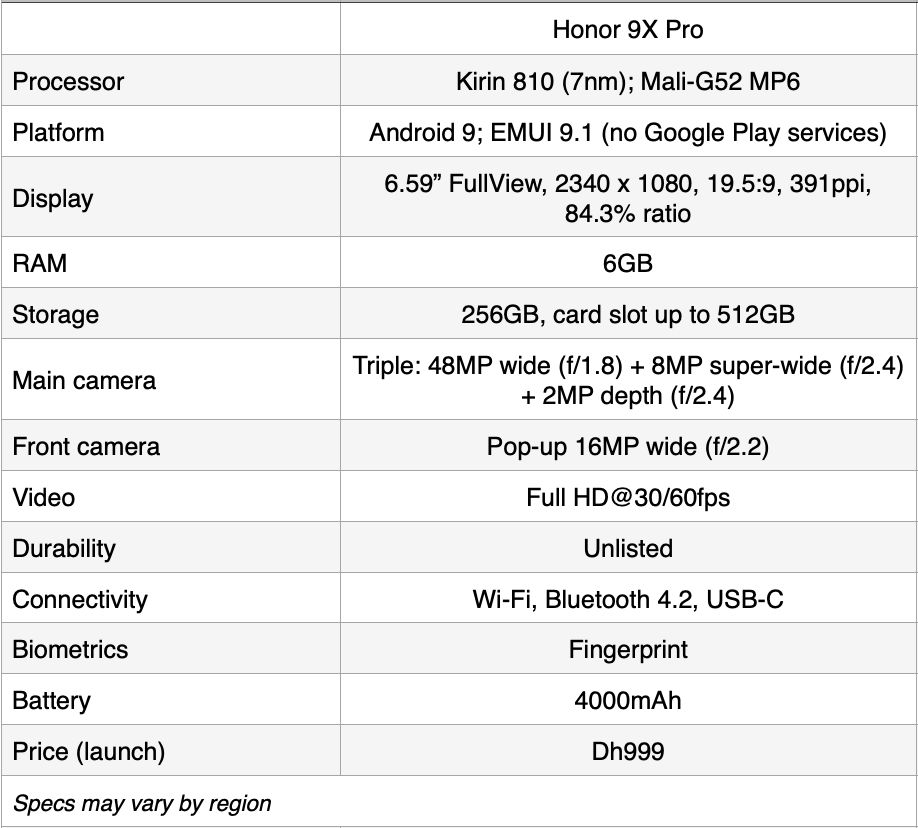 This isn't our usual Tale of the Tape segment, since the 9X Pro doesn't have a direct predecessor (obviously, the 9X is to the 8X; the 8X Max, meanwhile, is too big to compare), so we'll leave it at this simple spec lowdown. The 9X series consists of three devices (9X, 9X Pro and 9X Lite), one more than the 8X (8X, 8X Max).

The 9X Pro is as simple as it gets: A 6.59-inch FullView screen graces the front, with its thin bezels and the lack of an in-display front camera giving that real full-screen feel. We say 'lack' because - you guessed it - that snapper is tucked away on top as a pop-up camera. More on that later. 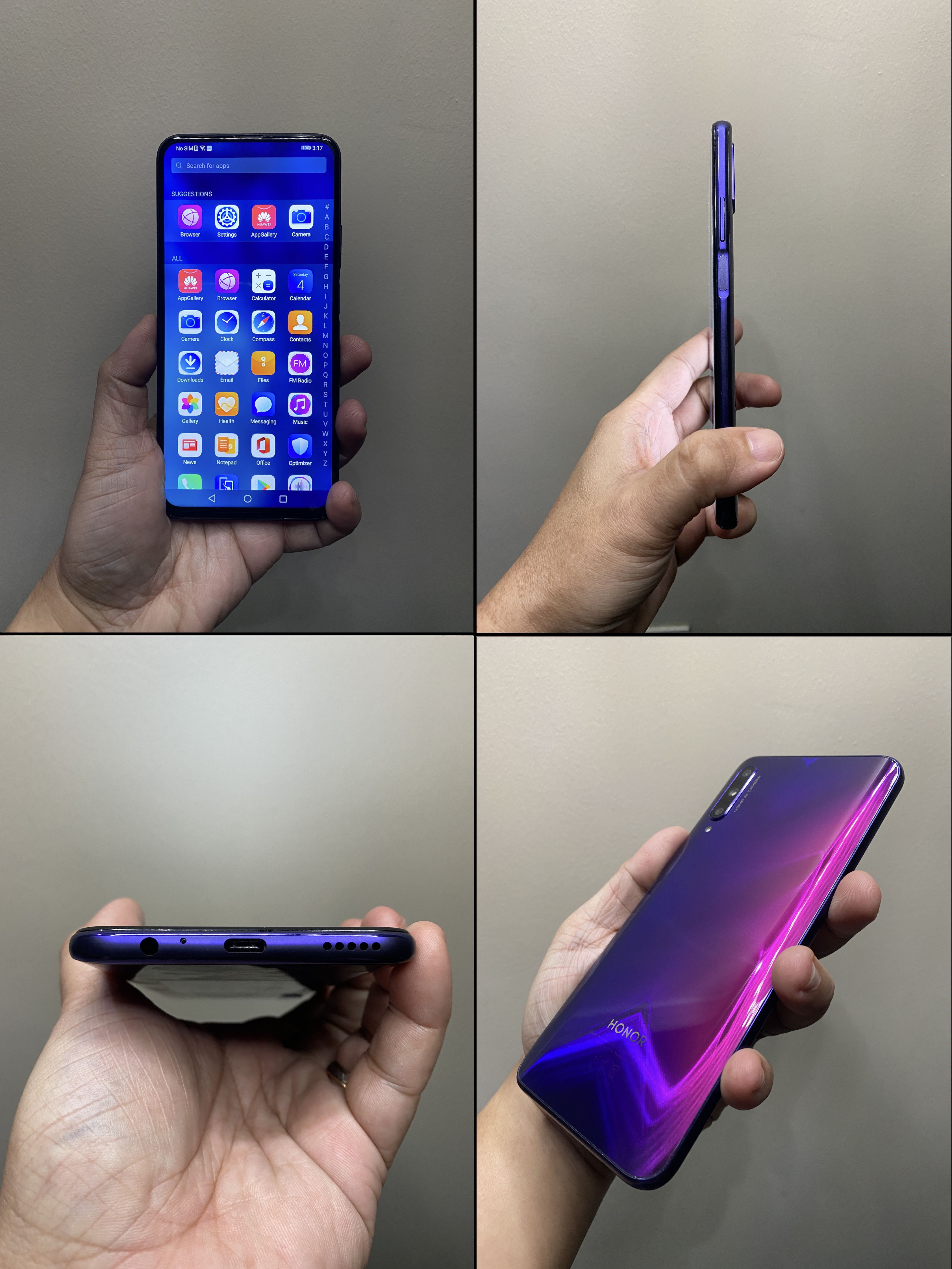 There are only two buttons and they're on the right, the volume rocker and power button, the latter of which also houses the fingerprint scanner, which is most comfortably used with either your left index or middle finger.

However, you won't get facial recognition to unlock the phone. It's a rather odd decision to leave out this feature that has become rather commonplace in this price range.

On top is the card tray and below are the 3.5mm audio and USB-C ports, as well as a speaker. Its rear, meanwhile, is adorned with a glass finish, with the camera nestled on the upper-left corner. There are two colour options: Phantom Purple, which is our review unit, and Midnight Black.

Right inside the 9X Pro is a Huawei's very own octa-core Kirin 810 chipset - the first device to use such a configuration - which is a middle-of-the-pack processor but was made to hold up well to handling tasks. There's only one RAM-storage combo at 6GB-256GB, with a card slot up to 512GB, which are good-enough numbers, particularly the latter.

The interface doesn't have an app drawer by default; you just have to swipe left from the home screen to gain access to the rest of your app pages (in which you can also create folders to club apps in. If you wish to have that drawer, you can change that in settings; activating this will show the app drawer button on the home screen with all apps listed alphabetically.

Swiping from above reveals the usual notifications and control panels, while doing so from anywhere on the screen shows app suggestions. And nothing will happen if you swipe left from the home screen.

You can say that the device is lag-free, and it's capable of handling tasks efficiently. That's a hallmark of Honor devices - they may be low in price, but they haven't sacrificed this important performance metric.

Alright, let's make one thing clear: The 9X Pro is an Android-based device based on Android 9 (upgradeable to Android 10), but services from Google are not available - at least not right off the bat.

We're all aware of the issue between Huawei and the United States, preventing the former from utilising stuff from US-based companies. As such, Honor - which you should know by now, is a subsidiary of Huawei - is also affected by this, and the 9X Pro does not run Google apps, including Gmail, Google Maps, YouTube, Chrome and, most critically, the Google Play marketplace. The 9X Pro's Web browser, simply called 'Browser', has Bing as its default search engine.

In its place is the Huawei App Gallery, which has a categories tab that will help you find replacements to the apps you're so used to. 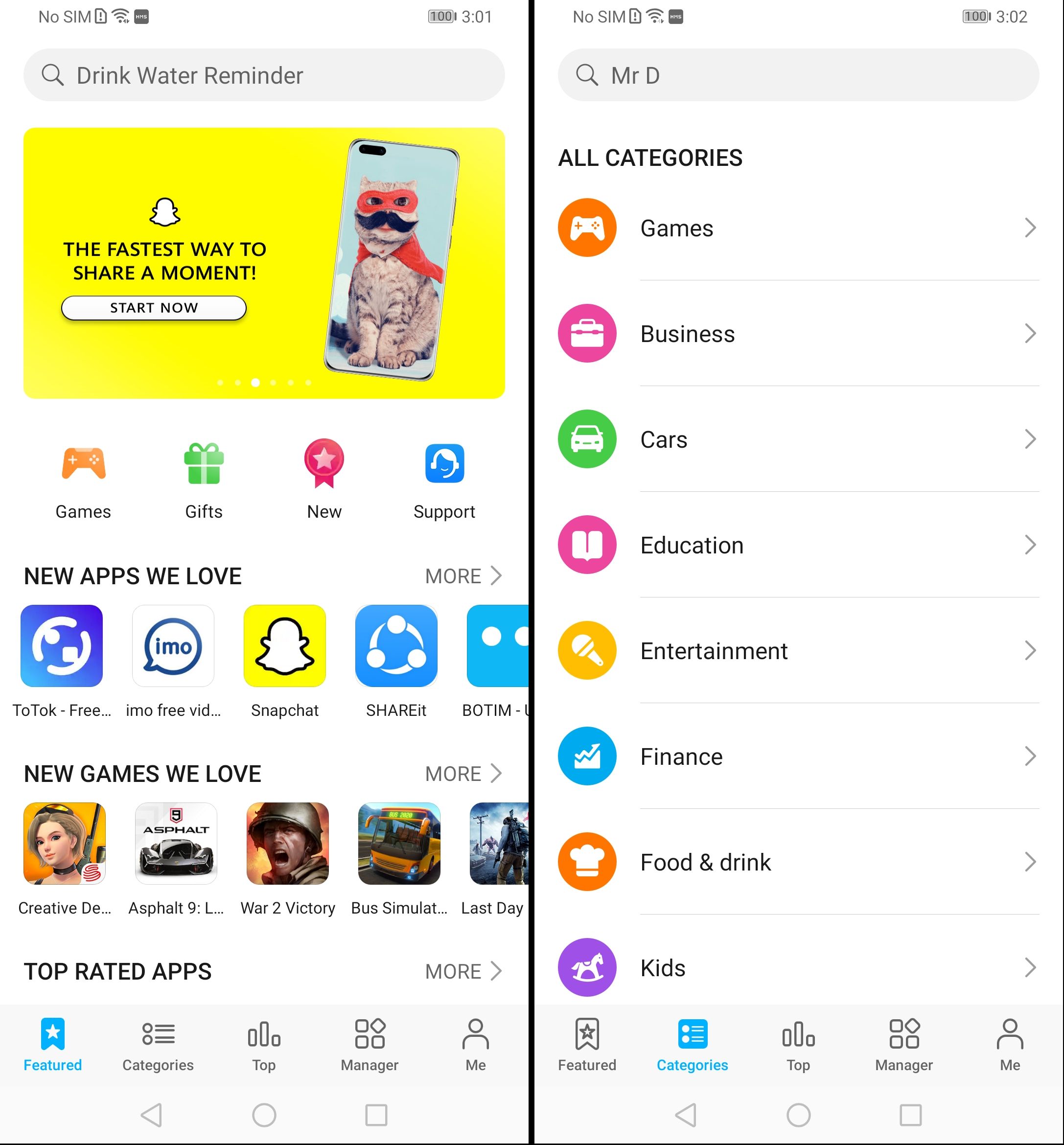 Now if you really insist on using those missing apps, there are ways, including copying them from an old phone into the 9X Pro (the Huawei Phone Clone app will help), or download and install APKs (Android application packages) from the Web. Be aware, however, that, since Google Play isn't available, updating them won't be easy (wanna keep downloading updated APKs every now and then?), which will then lead to compatibility issues in the future.

With APK being said, you may shoot back, why not just download a Google Play APK then? Well, we tried, but while Google Play was apparently installed on the phone, it just refused to open.

The likes of Facebook and WhatsApp also aren't installed by default, but APK versions seem to work fine. There's a handful that escaped the cut, including Snapchat, which is actually one of the featured apps on the Gallery's homepage.

If you're decided on using APKs, just be wary of your sources; the last thing you need is some nasty stuff creeping into your phone without your knowledge. 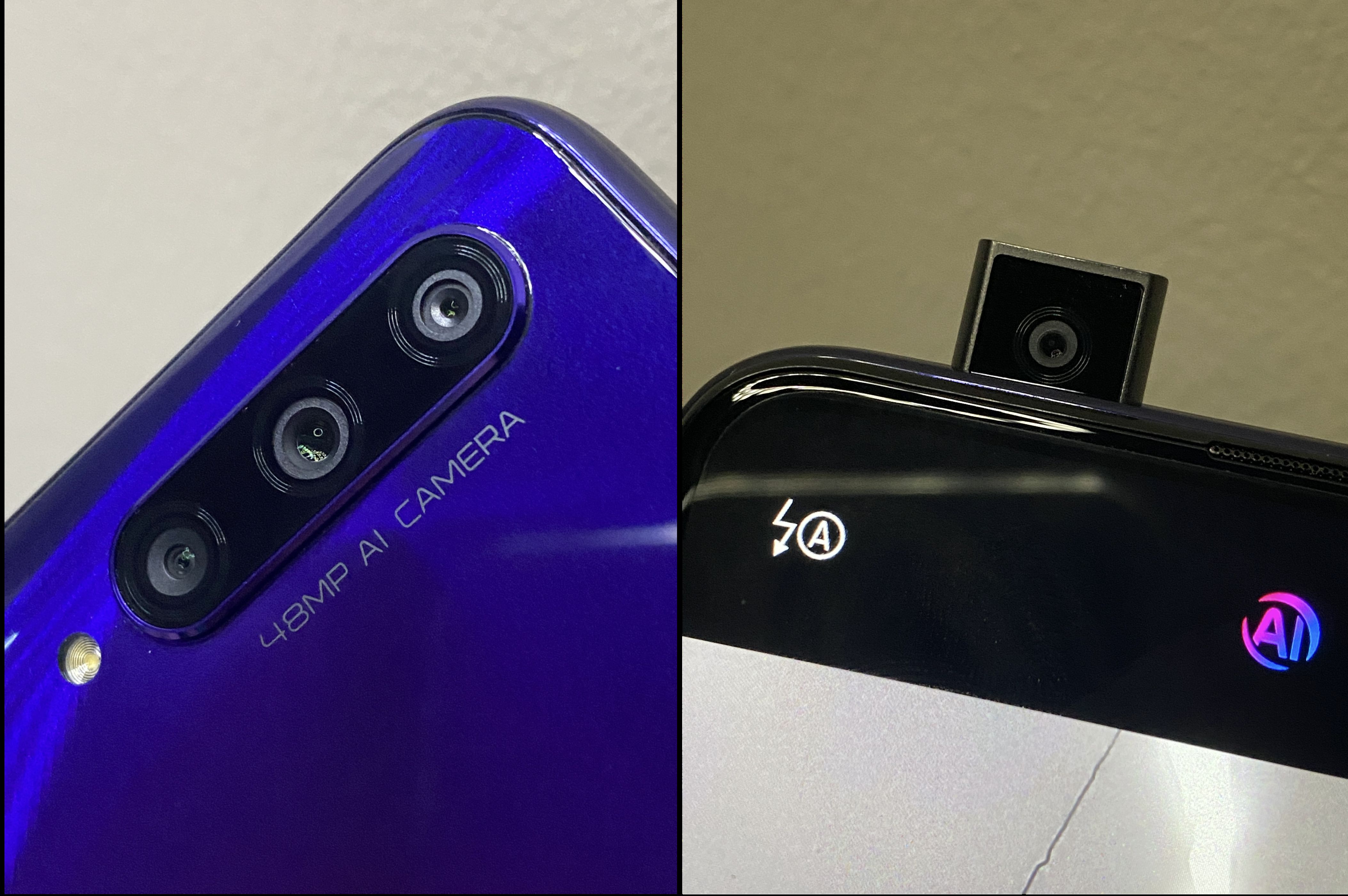 Let's see what it can do in good light:

Honor's cameras are known for holding up very well, and the 9X Pro continues that. I particularly like that photo of the spices; the result is so natural and the details are great.

Those tomatoes, meanwhile, were taken in a secluded corner of a shop, meaning its lighting is uneven and isn't as bright compared to other areas. If you look closely (you can click/tap on the photo), the sharpest parts are those from the centre to going down, while the area on top going up from that point gets mushy.

The 9X Pro can zoom up to 10x, and we enlisted Bumblebee to help us out with it:

These shots were taken in 0.5x (super-wide), 1x and 10x. Indeed, the more zoom you apply, the more mushy things can get. The most ideal maximum zoom you can go without sacrificing much image quality is 5x. 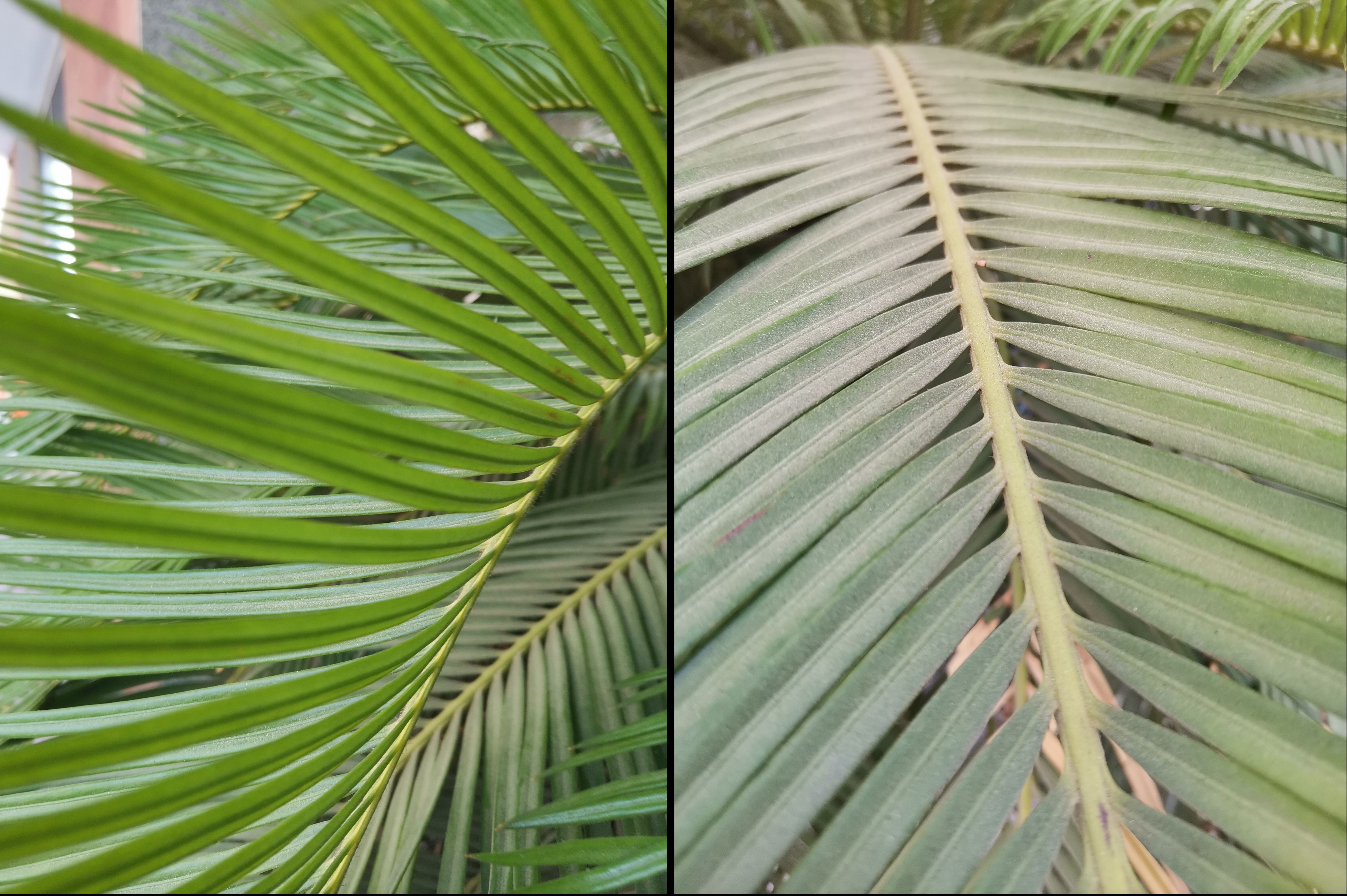 At night, the cameras ensure things will be well-lit, and you have two ways to do it: 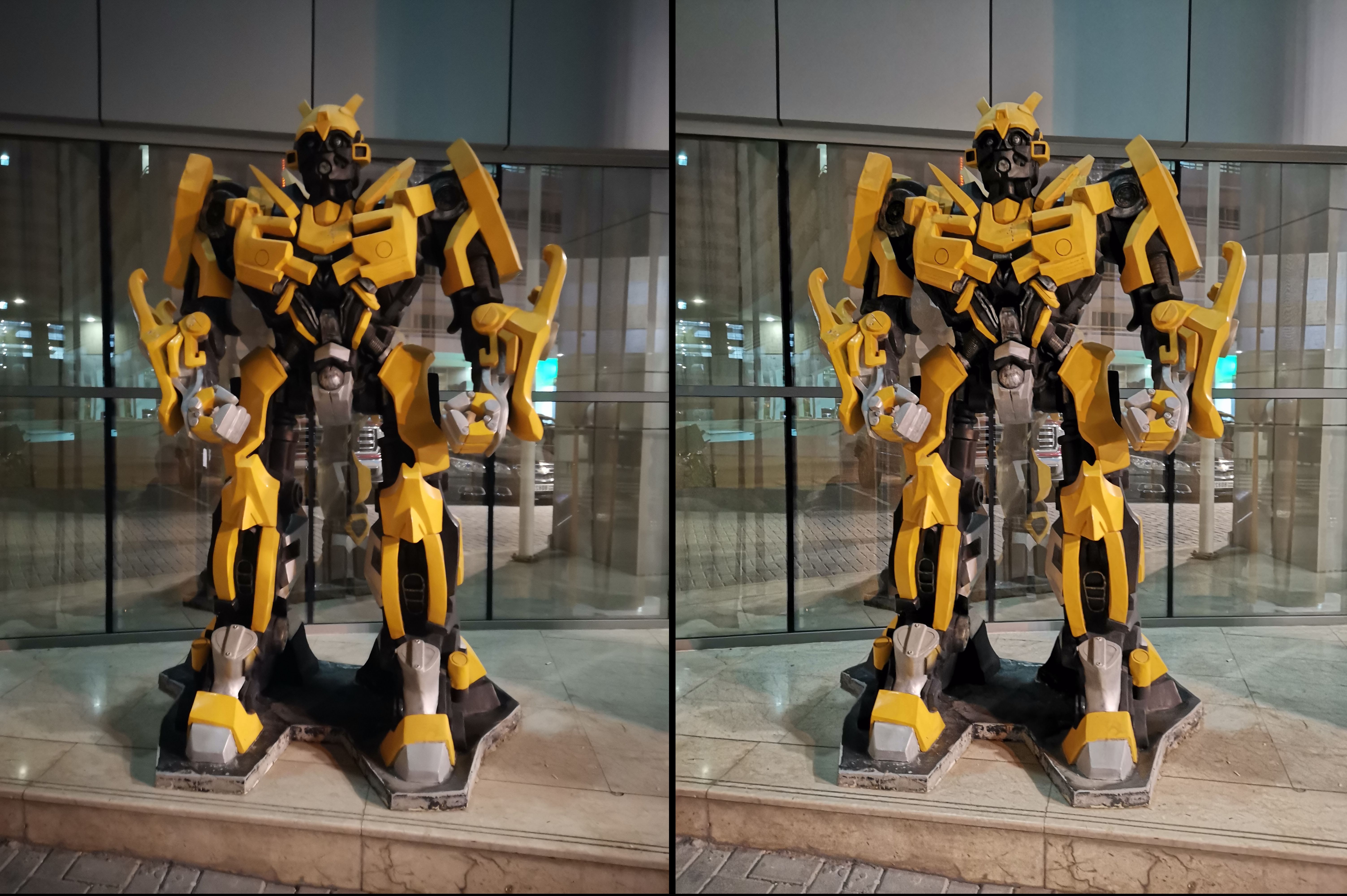 The first shot was taken using normal mode and the second used night mode, and you can see that the latter brightened and sharpened things up. The nearest light, FYI, is about 10 metres to the right. 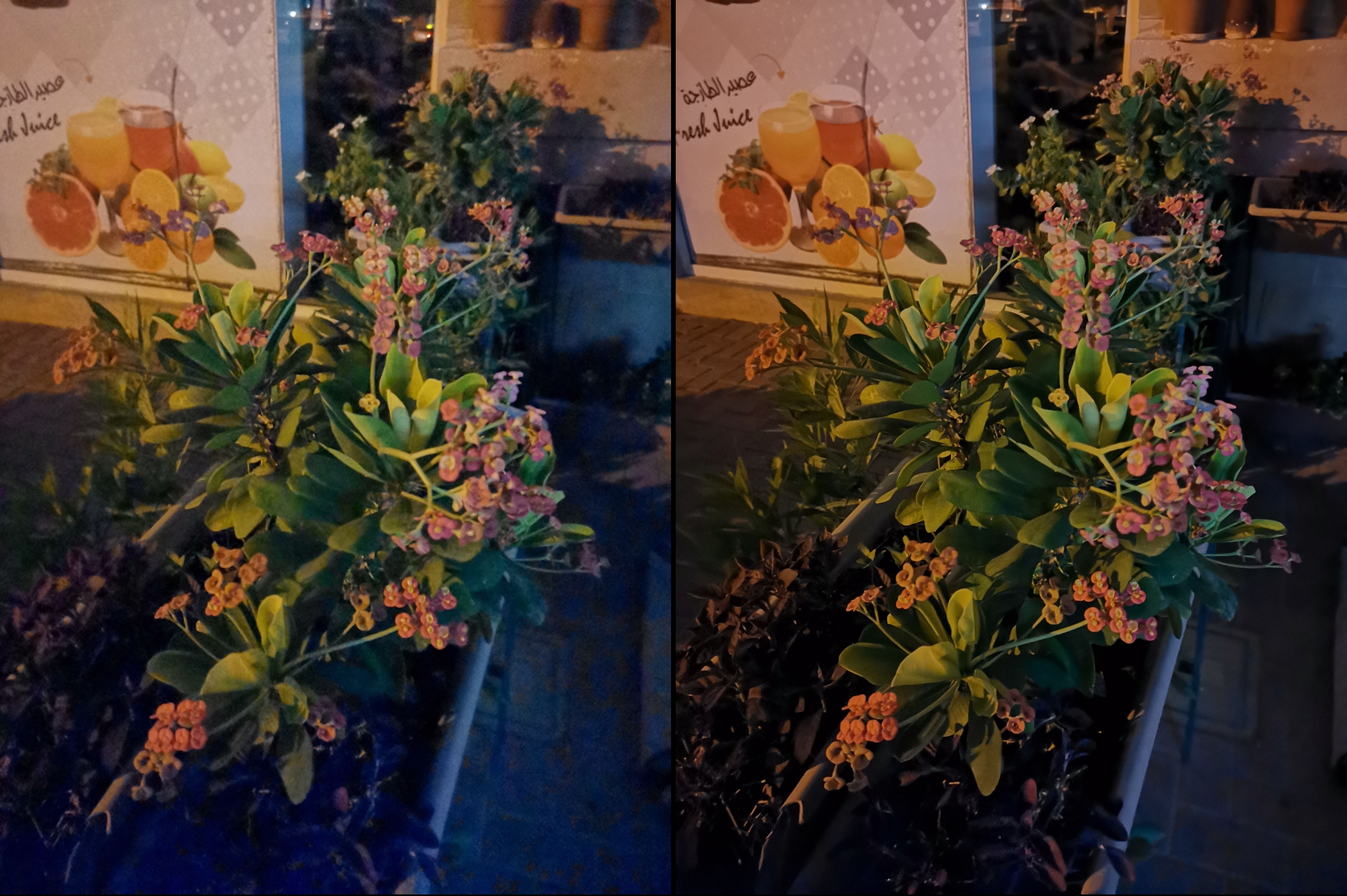 These were taken in a poorly-lit area. Be reminded, though, that using night mode will require you to stay still for a few seconds as the device processes the shot.

Meanwhile, the 16MP pop-up front camera produces your usual selfies, and the one on this device light you up a bit - aside from smoothening up your skin (hit-or-miss). But prepare for some grainy shots as the lights go lower.

In our standard one-hour YouTube-at-full-brightness test, the 9X Pro was sorta-kinda 'up' there - it yielded 16 minutes of power, which is a big number compared to others in its range. We have to point out that this was done via a browser, not the YouTube app, which will become a very relevant point later on.

Charging it, meanwhile, can be quite a slog. Using its packed cable and 10W charger, the device crawled to 31 per cent in half-an-hour, 58 per cent in one, 82 per cent in 1.5 hours before finally reaching the 100 per cent mark in an hour and 57 minutes. That's long, especially if you need a quick but significant boost.

All-day mixed use got us reaching for the charger by the day's end as it was down to below 20 per cent, so it will be critical to plan out what time you'd want to plug the phone in, given its slow pace to a full charge.

One thing is clear: The Honor 9X Pro is a very nice phone for its price, but the biggest flaw is the lack of Google services. Sure, there are workarounds to make it work, but it will take extra work and a high sense of maintenance.

That said, there are rivals at this price range that have the full stack of Google services, which can sway opinion. Despite that, the smartphone's strengths speak for themselves, and combined into the device they present a compelling proposition, especially putting in the fact that it's so attractively priced.

The glimmer of hope here is that the issues surrounding Huawei will be settled - and we earnestly hope it does happen very soon. It's us users that are bearing the brunt of all this, being denied services we need and deserve.

EDITOR RATING: If you're fine with updating those missing apps manually and frequently (not to mention keeping track of the latest versions), go right ahead - especially if you don't use much of them. It's hard to ignore a sub-Dh1,000 device with some nice specs, but that endeavour can be a hassle. 3.5/5

These were the details of the news REVIEW: Honor 9X Pro for this day. We hope that we have succeeded by giving you the full details and information. To follow all our news, you can subscribe to the alerts system or to one of our different systems to provide you with all that is new.

PREV Apple conference to release the most expensive phone ever, iPhone 13
NEXT Google allows users to see elapsed time during meetings