Thank you for reading the news about REVIEW: Samsung Galaxy S20 FE 5G and now with the details

Aden - Yasmine El Tohamy - A number of heavy-duty specs grace this 'lite' version - of course, for a lower cost. Is it worth it?

Earlier this year - just before the Galaxy S20's launch - Samsung doled out Lite versions of the S10 and Note10.

Now, to end the year, they're doing it again, but in a different yet still familiar identity.

Samsung recently introduced the Galaxy S20 5G FE - that's Fan Edition - which is a, yes, you guessed it, a lite version of their first 2020 flagship.

The reasoning behind the launch of any such 'lite' version is toning down on specs, yet retaining a number of the most important, in order to bring down costs. And as its name implies, this is in response to Samsung's fans the world over. And you may remember the FE from 2017's Galaxy Note7, which was the first time the monicker was used. 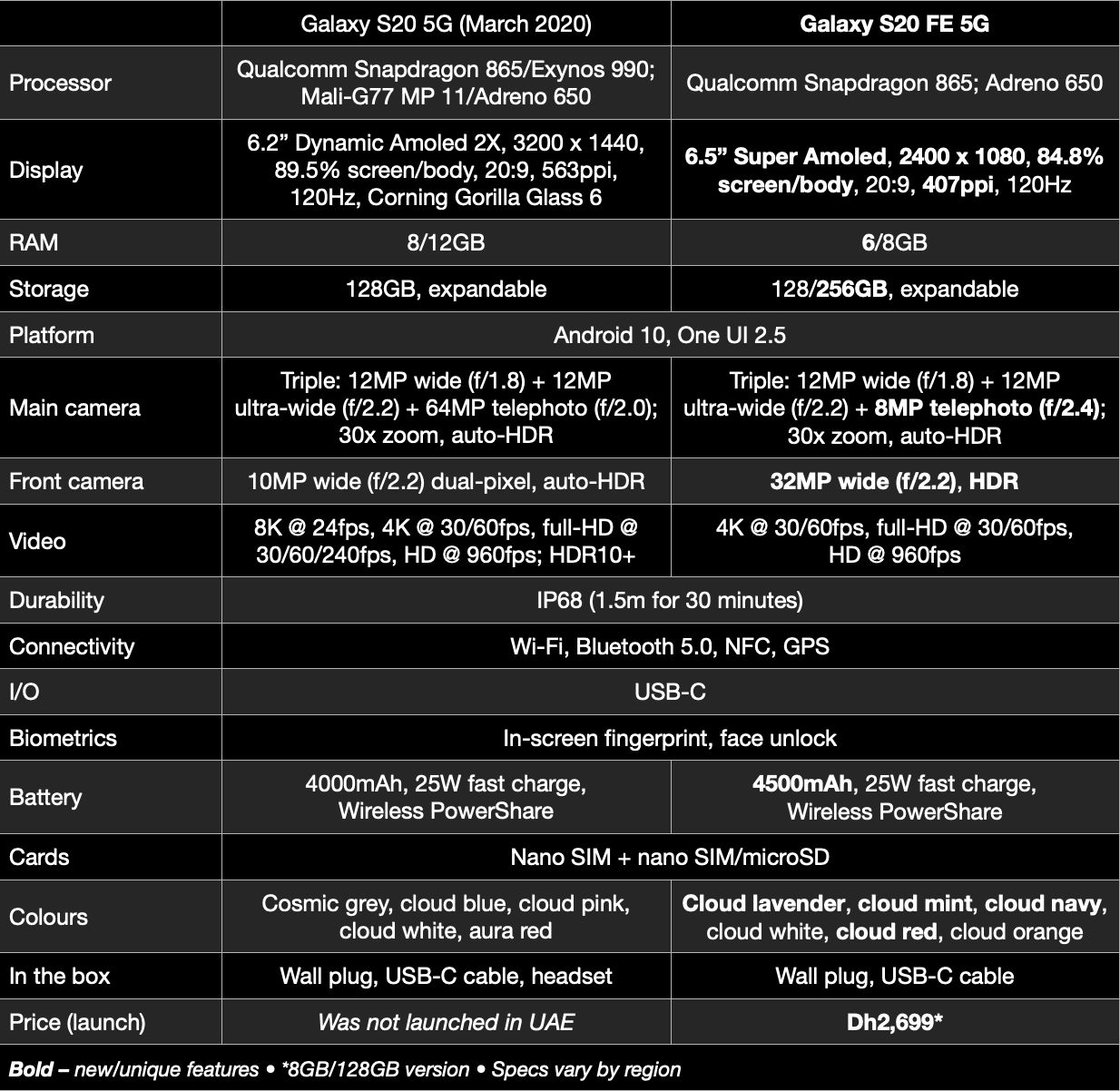 Before we proceed, a couple of clarifications: Only the 8GB/128GB version of the S20 FE will be available in the UAE, and only the 4G version of the original S20 is available here. The FE's 4G option, meanwhile, clocks in at Dh2,499.

Consider this a see-saw of sorts, with some upgrades and some not-so-upgrades.

The whole idea here is that Samsung plucked some features from the original S20 series and a bit from the Note20, and the result is the FE.

And look, as an added bonus, you get some embossed icons of all sorts on the box.

In short, as our friends from Samsung put it, it's the best from both worlds. We're tempted to drag in the Note20 in here for the sake of comparison, but let's stick to the S world since, hey, this is an S, and an S20 at that.

Give it a quick glance and you'll see its resemblance to the model it's based on, but upon closer inspections, you'll see where they diverge.

First, display. The FE has a 6.5-inch screen, which is middling as the S20, S20+ and S20 Ultra are at 6.2, 6.7 and 6.9 inches, respectively. And it also gets the 120Hz refresh rate seen in them and the Note20 as well (sorry; couldn't help it with the latter). Moving around the screen is so buttery-smooth and transitioning from screen-to-screen is seamless as it can get.

However, it lacks the curved edges seen in the original S20, and has bezels that are noticeably thick. Now if you're used to Samsung's highest-end devices, this setup will indeed give you the impression that it's a lower-priced phone. Terming it as 'cheap'-looking could be unfair, since looks don't tell the whole story - but for some, especially the purists, that could be the case.

Meanwhile, its body is made up of what Samsung calls 'glasstic' material, something made out of plastic but has the look, feel and durability of glass and which was used in the Note20 series.

Now there's been a debate whether Samsung using plastic as its main material on its high-end phones is okay, both in terms of aesthetics and value for money. Personally, it does work - I've been particularly mesmerised with how well it went with the bronze variant of the Note20 Ultra - but it could be a matter of which colour is used.

Samsung has its fair reasons, so as the rest of us; we'll leave this up to you to decide on. As far as we're concerned, it still works here. Maybe an added layer of gloss or teeny-weeny thin glass should do the trick? (Go ahead and google what's going on in the rumour mill for the 'S21'.)

Also right behind is the familiar rectangular camera block, and it also has slightly rounder edges compared to the S20. And by the way, the volume rocker and power button are on the right, and the USB-C port and card tray are below.

Meanwhile, coming with the device in the box are a USB-C cable, a wall plug with Samsung's fast adaptive charging and... nothing else. No headset is to be found here, which makes us wonder what could be cheaper (there goes that word again) - getting an FE and a headset separately, or getting the latter with the former? Hmmm...

We could just point you to our previous S20 review, but since we all love you, let's still go do a rundown of it.

That's because the S20 5G FE shares one very important component with the S20 5G: A Snapdragon 865 processor. It would've been easy for Samsung to downgrade the chip on the former, but sticking to this is a very good decision, since it'll make the FE future-proof.

As is standard with Samsung's devices, swiping up or down from the home screen will take you to all apps, while doing so to the left will take you to more home-level screens; do it to the right and you'll get into Samsung Daily, where you'll get your fill of news, entertainment and other stuff. You can select what apps you can place in here, including from Netflix to Spotify and games to tips on how to get the most out of this feature.

Oh, and while we did mention that this phone doesn't have curved edges, it still has the edge panel, which you can activate by swiping from that slim on-screen white line just beside the volume rocker. Go ahead and pick from settings what you would want to see - apps, contacts, smart select and weather, among others, plus more from the Samsung Store - and access them easily.

You can also choose how to navigate through the device. By default, it comes with the usual gang of virtual recent apps, home and back buttons below, but you can swap this out for swipe gestures and perform a swipe-up-and-hold or swipe-up to see recent apps or go to the home screen. To go back or forward a page, swipe from the left or right edge, respectively.

Meanwhile, the security team is complete here, supervised by Samsung's Knox tech. You can face unlock and an on-screen fingerprint sensor, both of which react quickly.

Here's another area Samsung didn't sacrifice (much): The FE retains the same triple-camera setup of the S20, but while the wide and ultra-wide lenses return with 12MP sensors each, the telephoto lens is down from 64MP to... 8MP. 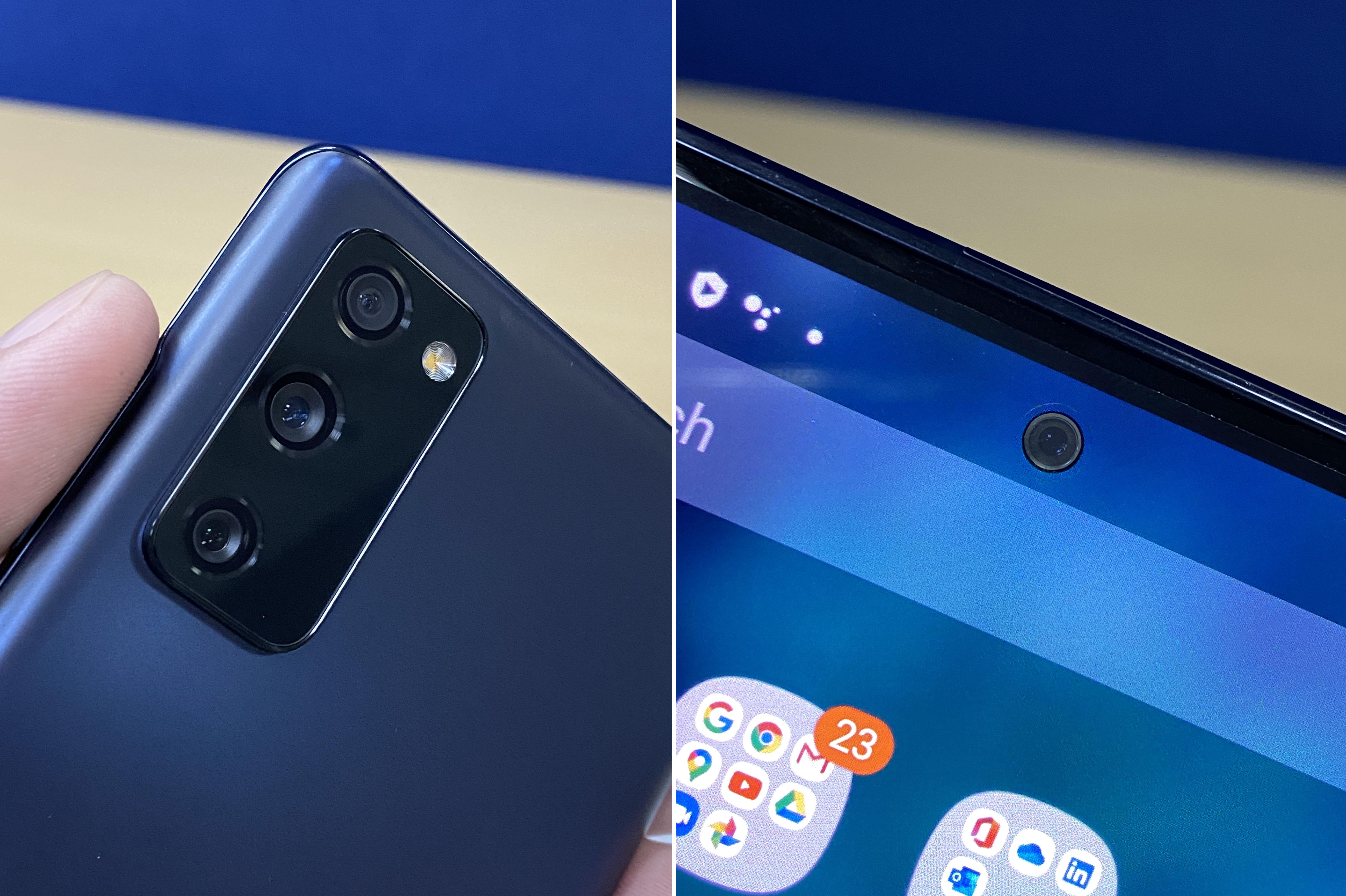 As always, the more you zoom in, the more detail you would lose, and as we've discussed before in Samsung's other gizmos, 20x is the farthest you can go that will still give acceptable results. Also, be always aware that a steady hand is needed for the best possible shot. We also like that nice reflection the floor.

Again, details remain solid, and we like how the sun is smoothly captured there. Which brings us to nighttime.

Those on the left were taken with regular mode, while those on the right used night mode. You can see that the latter fixes glares to some extent...

...and also adds additional lighting. The snaps above were taken in a dark place, and you can see how regular mode can brighten things up. One more thing to point out here is that it was a windy night when these were taken; while there are indeed some plants that are mushy because they were swaying, the overall results are still good. Bear in mind, however (and again), that the darker the situation, the longer it'll take for the snapper to process your shots.

The selfie camera, meanwhile, is significantly up at 32MP from the S20's 10MP, but it loses the dual-pixel feature of the latter. Dual-pixel technology allows faster focus, but honestly, we didn't really feel that loss on the FE.

...except when the shots were taken in dark situations; the last one used night mode, which light you up a tad (the Note20 did better). It can also take a little while before it detects and focuses your face (no dual pixel, remember), and takes several seconds to process a shot.

Battery is another aspect Samsung is touting on the FE, promising all-day battery life just like the S20. And it's pretty much good as advertised; we'd end up with about 40 per cent with a good mix of use and that's enough to last you until early afternoon the following day.

But... go heavy on it - snapping shots, playing games, surfing and streaming - you could end up at about 10 per cent once the sun sets. Still all-day, but, in the event you've got some party or something after your regular day, wouldn't you love it to be an all-nighter as well?

In our standard one-hour YouTube-at-full-brightness test, the FE lost a fair-enough 10 per cent, pretty much in step with the inhabitants of mid-range land and even a number of flagships.

And, yeah, we mentioned a plug with fast adaptive charging. Let's see how that panned out. 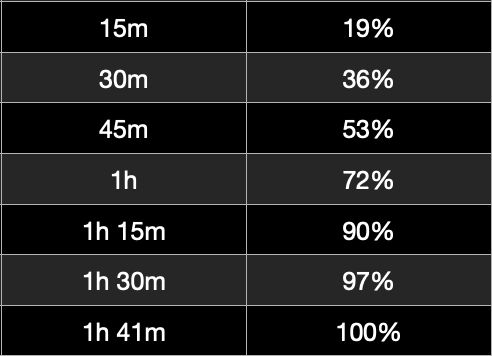 Typical result in terms of the pace of charging (fast then slows down towards the end), but it's significantly slower than the S20: The FE comes with a 15W charger (though it supports 25W charging), while the S20 had 25W tech to go along with it. In our S20 Ultra 5G review, it zipped to 100 per cent a little over an hour.

The Samsung Galaxy S20 FE 5G can be summed up in very simple terms: It can definitely give flagships a run for its money, and overwhelm those within its price range, even those that are below it, considering the fact that there are a small number of phones out there that technically fall in the mid-range category but are in this cost level.

Samsung did cut corners, but did good in not snipping away too much. The three most important aspects - chip, camera and battery - are all flagship level, and everything else runs with it.

However, we must point out that the entry-level S20 in the UAE is at Dh3,199, and here's where your preferences come into play: Among others, the FE is 5G-ready but doesn't have a headset included, while the S20 only has a 4G version available here, but has more higher-end specs.

Still, that's the whole thing about this: A great experience at a lower price. Your call.

EDITOR RATING: Put it this way: If you don't care about aesthetics, you're good with this. More than good. 4.5/5

These were the details of the news REVIEW: Samsung Galaxy S20 FE 5G for this day. We hope that we have succeeded by giving you the full details and information. To follow all our news, you can subscribe to the alerts system or to one of our different systems to provide you with all that is new.