Apple’s four new IPhone 12 series smartphones are all 5G-capable, the technology giant’s first devices to incorporate the next generation of telecommunications network technology. Apple is pretty late with 5G as rival Samsung launched its first phone, the Galaxy S10 5G, in early 2019. But then Apple is often late to adopt new technology, and for good reason.

By early 2020, a 5G phone had limited markets and was therefore seen as a luxury that fetched a higher price. Even as prices fell and new manufacturers announced 5G phones, many network update purchases were future-proof and not because a real world use case was available.

Currently 65 countries have at least one 5G service, which in no way means that the service is available nationwide or accessible to all users. Ericsson estimates that 60 percent of the world’s population will have access to 5G by 2025.

As a result, most of the 5G devices launched up until a few months ago were just showcases of the latest technology that are only relevant in a few markets like South Korea. For this reason, none of the smartphone manufacturers have switched on 5G for their entire device bouquet. However, in recent months, particularly due to the pandemic that is making work from home a necessity, many new use cases are opening up, particularly in terms of improved mobile broadband, or EMBB, which enables high-speed connection to homes without the need for fiber.

How will new iPhones affect the 5G sector?

With 5G not yet widespread, it made little sense for Apple to announce a 5G phone last year. Cupertino has always been wary of new technologies unless they are pioneers. Now Apple has launched the entire iPhone 12 series with 5G. During Apple Event Tuesday, CEO Tim Cook announced that the new phones will work with over 100 network partners around the world. 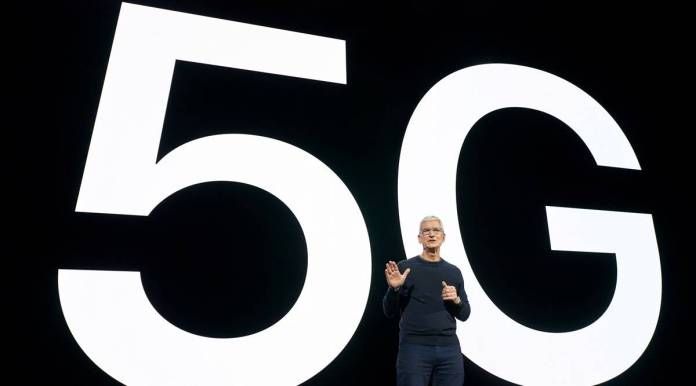 Apple CEO Tim Cook speaks about the value of 5G to customers at an Apple event held at Apple Park in Cupertino, California, USA in a photo posted on October 13, 2020. (Brooks Kraft / Apple Inc./Handout via Reuters)

Why will Apple make 5G mainstream?

In markets like the US, Australia and Japan, where Apple dominates, a new line of iPhones triggers a major update cycle with millions of users switching from older iPhones to the latest. In this update cycle, all users switch to 5G. Overnight, the number of 5G users in these mature markets will multiply many times over.

To make the transition easier, Apple is reducing the monthly subscription fee with partners like Verizon. For Apple, the lightning-fast speeds 5G offers along with the new generation of services provide a better reason for its users to buy a new phone and not hang on to an older device any longer than necessary. This has been cited as one of the reasons for Apple’s slow growth in devices in recent years.

Even in markets where 5G is not yet an option, the new iPhones promise a captive user base if the network providers decide to switch. In fact, this trapped base of top-end users could even be an incentive for many service providers to invest in 5G services. Given that Apple users have always been at the top of the pyramid when it comes to consuming data and services, their access to 5G also opens up many new opportunities for service providers and app developers.

Such a geographic mass effect does not normally occur when a Samsung or OnePlus changes over to a new technology. This boost will ultimately benefit the entire smartphone market, where 5G was previously a luxury service provider hovering on the edge of the market.

India, the second largest and fastest growing smartphone market in the world, is at least a year away from its first 5G network. Therefore, the 5G part of the new iPhone 12 series won’t be relevant to users here for the time being.

However, you will have phones capable of using these high speed networks if India decides to allocate frequencies for the new generation of telecommunications technology. As of now, India has not started such trials and it is unlikely to be able to enter service before the end of 2021.

Fortunately, some of the installed hardware of companies like Ericsson can be changed with just one software upgrade. At least some of the Indian service providers can switch to 5G relatively easily, although possibly not over their network or at all locations.

???? Express explains is on now telegram. Click here to join our channel (@ieexplained) and stay up to date

But 5G is still a very new technology and much deeper than the other generation upgrades in telecommunications. Some call 5G similar to a structure, and this means you could see new implementations, especially in markets like India, where the last mile connectivity gap to rural areas could be closed or existing networks could be relieved by the burden of high-speed connectivity houses and offices are taken over.

???? The Indian Express is on the telegram now. Click here to join our channel (@indianexpress) and stay up to date on the latest headlines

Download the Indian Express App for the latest explained news.

These were the details of the news How Apple will make 5G mainstream for this day. We hope that we have succeeded by giving you the full details and information. To follow all our news, you can subscribe to the alerts system or to one of our different systems to provide you with all that is new.