Riding on the success of the series which is a hit on Netflix, GameMill Entertainment gives us an adaptation of Cobra Kai in video game.

Given the studio’s DNA, everything urged us to be careful with this new adaptation. If GameMill Entertainment has some small successes to its name, like the likable Nickelodeon Kart Racers 2, the studio is also the author of a few hiccups, like the very mediocre GI Joe: Operation Blackout, just released. More worryingly, this was the studio’s third project to emerge at the end of the year. However, we know that carrying out three gaming projects at the same time is an achievement. And then, of course, there was the very late announcement of the game, presented just weeks before its release – which is never a good sign.

Let’s not hide it from you, Cobra Kai: The Karate Kid Saga Continues is far from a real success, but fans of the franchise may well find what they are looking for.

Because we can feel it, the developers of Cobra Kai wanted to pay a nice tribute to the universe of the saga while playing on the nostalgic fiber of gamers. They thus chose to opt for an old-school beat them all, in the purest tradition of the genre. Cobra Kai follows in the footsteps of big names like Golden Ax and Streets of Rage. Unlike them, however, the game is entirely in 3D – which is probably the most dubious choice for this adaptation. Because very clearly, the 3D beat them all do not have the charm of their ancestors. And above all, we feel that the developers have worked with extremely limited resources. Aesthetically, the game is not very beautiful. However, it is especially at the level of the animations that it blocks, with choppy movements and a little latency between the entry of a command and the blow on the screen. The graphics of the game are however not bad and some nice staging effects are even present, especially during special attacks.

Handling side, it’s a cold shower the first hour of play. During the first level, you have the choice between two keystrokes and one jump. The good news is that the player will gradually unlock skills and special moves through a large skill tree. Each of them can be unlocked with the virtual currency recovered in the game. The concept is well thought out, insofar as you really feel your character evolve over the levels. The problem is that at the start of the adventure, the game is not very interesting. Over time, however, the gameplay gains in depth and the title shows real potential. Especially since it is playable in two, in coop.

In terms of lifespan, the experience is quite solid. The game offers a total of 28 levels, some of which are quite long. Count on average about ten minutes per level. For the genre, the content is therefore very generous. Especially since the perks are numerous with the skills to unlock and the challenges to complete. If it turns out to be richer than expected, Cobra Kai suffers from a lack of precision in the controls and overall finish. The character moves too slowly on the screen, the latency between command and action too often leads to blows given in the void and during passages that are too muscular, the game tends to quickly become very messy. We are very far from the technicality and the very sustained pace of Streets of Rage. Sadder still, the boss fights are completely sloppy and only accentuate the game’s flaws, with characters moving around the screen robotically, regularly unleashing super-attacks in the void.

And then of course, there is the question of the price, shockingly high for this type of production. Cobra Kai is typically the kind of cool little game that you would have said yes to at $ 15. But at € 39.99, it’s hard to crack without thinking twice, especially at such a busy period of releases. Unintentionally, the game is buried in a niche. Only die-hard fans of the series will find what they are looking for at this price.

It should be noted in passing that if the game sweats the fan-service with heaps of collectibles to unlock and an atmosphere faithful to the series, the staging in the form of a comic book is not a real success. We are often very bored in front of these lifeless boards – to the point of coming very quickly to systematically zap each of them. It’s a shame, because in itself, the storyline wasn’t completely uninteresting, especially since the game gives us the choice to explore it through the eyes of the Cobra Kai clan or the Miyagi-Do school.

As for the soundtrack, the result is convincing. We find the official voices of William Zabka and Ralph Macchio and some emblematic pieces of the show. It does the job, if not surprising.

Faithful to the Karate Kid spirit, this very free adaptation of the series is intended above all for die-hard fans of the show. Full of good intentions, GameMill’s game is always lackinghowever clearly ambitious. The developers liThis is an old-school beat ’em all with a very attractive proposition, with gameplay that is enriched during the adventure and generous content. The title walks in the footsteps of a Streets of Rage, but does not look like it. The developers have opted for a 3D universe that suits the genre rather badly. Aesthetically quite poor, the title suffers above all from hazardous animations which reflect a real lack of budget in terms of production. On the gameplay side, the controls also lack precision, with too much latency in terms of shots and a fairly slow pace. At 15 €, why not. At € 39.99, the pill will be much more difficult to pass. Despite its big flaws, Cobra Kai: The Karate Kid Saga Continues does not lack charm and it is a shame that the game is delivered to us as is. 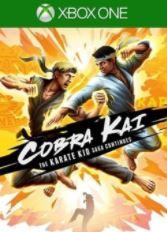 These were the details of the news Test – Cobra Kai: in the footsteps of Streets of Rage for this day. We hope that we have succeeded by giving you the full details and information. To follow all our news, you can subscribe to the alerts system or to one of our different systems to provide you with all that is new.

PREV Discover hidden spy cameras in hotels and homes
NEXT Vivo Y33s is a new phone from Vivo | The...