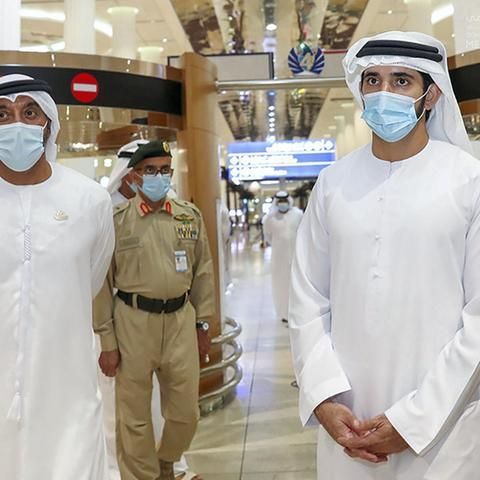 Sheikh Hamdan bin Mohammed has backed Dubai International Airport to retain its top ranking in the world for international passenger traffic as it reopened to tourists.

The Crown Prince of Dubai toured the airport on Tuesday as international visitors arrived for the first time since March due to the coronavirus pandemic.

"I also observed the various precautionary measures in place to ensure the health and safety of all travellers and the community," he said on Twitter alongside a video that showed him being instructed on the protocols in place within the terminals.

"For many years, Dubai International Airport has ranked first as the world’s busiest hub for international passenger traffic. With our teams’ outstanding efforts, we will retain this ranking. We strongly believe in our ability to reinforce Dubai’s outstanding position in global travel & tourism."

Dubai International Airport handled 86.4 million passengers in 2019, making it the sixth year in a row that it ranked first as the world's busiest for international passengers. India was its top destination, followed by Saudi Arabia.

Passengers wore face masks and gloves as they arrived on Tuesday and were screened by thermal scanners. They also received special stickers on their passports wishing them "A warm welcome to your second home”.

Last month, the Crown Prince chaired an Executive Council meeting at the airport's Terminal 3 as he reviewed plans to revive the emirate's tourism.

During the meeting, he said the airport was the "beating heart of the world" with Emirates airline as its artery.

Meanwhile, Dubai has the "highest standards of health and safety" in line with international protocols, according to Sheikh Ahmed bin Saeed president of Dubai Civil Aviation Authority.

He said on Tuesday that combined efforts resulted in the emirate receiving a Safe Travels stamp from the World Travel and Tourism Council.

• You can find out which destinations Emirates is flying to here

These were the details of the news Sheikh Hamdan backs Dubai International Airport to retain number one world ranking for this day. We hope that we have succeeded by giving you the full details and information. To follow all our news, you can subscribe to the alerts system or to one of our different systems to provide you with all that is new.

Dubai Police to use Artificial Intelligence techniques to secure Expo 2020